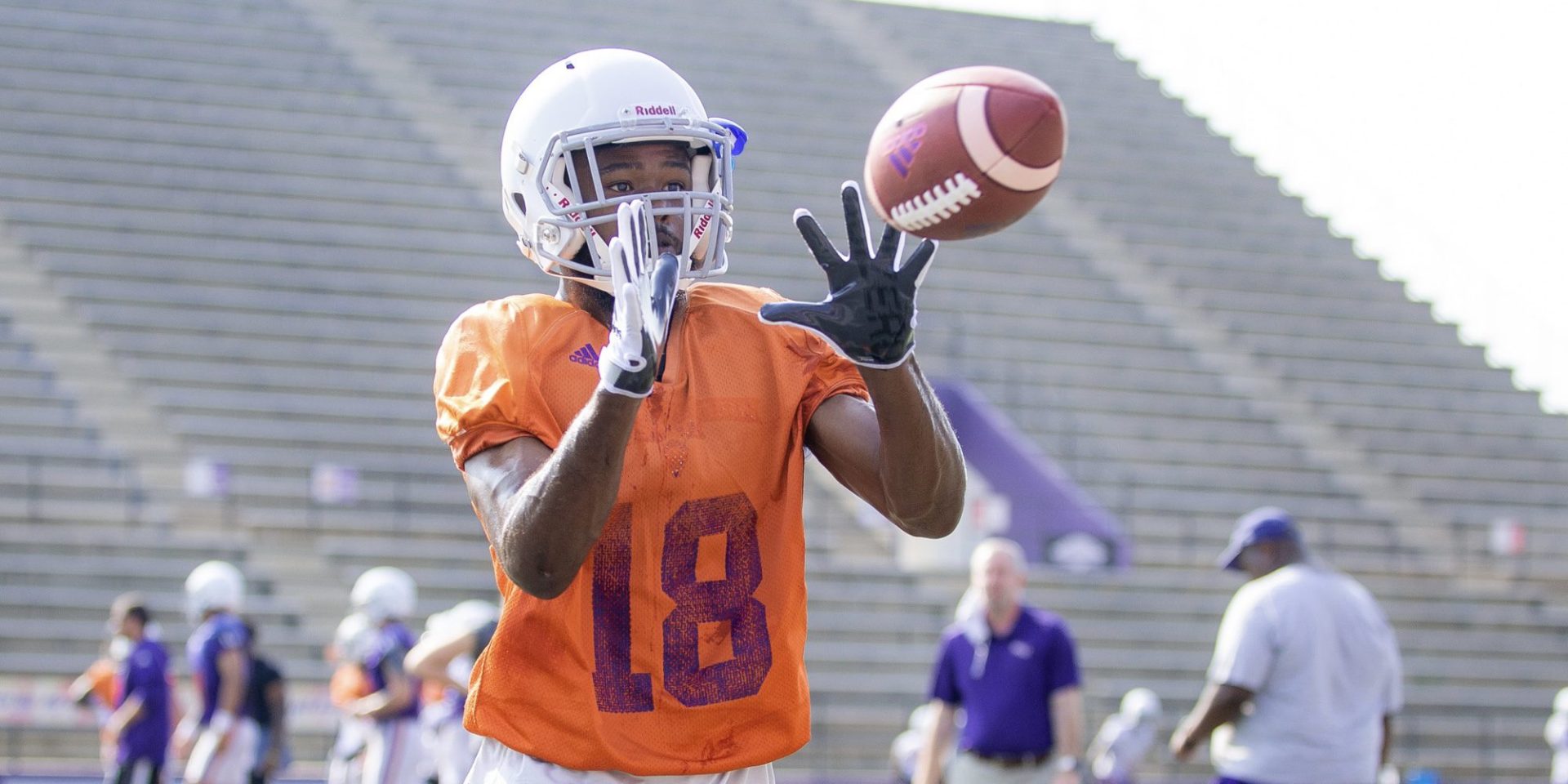 NATCHITOCHES – The heat was back, and so were the Demons.

Northwestern State started its truncated fall 2021 football camp Friday morning with a nearly two-hour workout inside a sun-splashed Turpin Stadium, mixing in newcomers and veterans for the first time.

“It was good to see,” fourth-year head coach Brad Laird said. “OTAs in July and 11-on-11 practice in fall camp is different. Our guys realize that. The bullets fly a little faster in camp. It was good to see them in that type of atmosphere. Not just the new guys, but some of the veterans – we wanted to see the leadership and the improvement they’ve made from last spring to this fall.”

Those veterans were joined by a handful of newcomers, especially on the offensive side of the ball.

While quarterback Mark Salazar (San Diego State) and wide receivers Jay Griffin IV (New Mexico) and Stanley King (Rutgers) went through their first workouts as Demons, the trio had been able to work together throughout July, leading to an easier transition on the field Friday morning.

“That summer period is crucial for building team chemistry,” Salazar said. “We were grinding together through workouts and bonding. I’m looking forward to the rest of call camp, being able to throw a football around. I’m excited to get to work with these guys.”

“It was very important,” he said. “It allowed us to get to know each other and build chemistry with the quarterbacks. It helped us a lot on this first day of camp. We had run routes with them. The more reps we can get, the more we can be around each other is important.”

The value of the July workouts for the newcomers straddled each side of the line.

“I was able to learn how everything goes, learn how the coaches are,” said linebacker Kwame Sarkodie, a transfer from Navarro College. “I feel like we’re a family already.”

While Laird was excited to see his charges back on the field after a relatively short time away – the six-game spring season led to a much shorter-than-normal offseason – the first day of practice was a typical one.

To a man, the trio of Sarkodie, Salazar and Griffin said there were plenty of chances for the Demons to improve going forward during the eight-day fall camp, which concludes Aug. 14 with the first preseason scrimmage. Northwestern State students report to campus for fall classes beginning Aug. 16.

The attitude of improvement has funneled from the top of the coaching staff down to the players.

“One thing we talked about (Thursday) night was making every day count,” Laird said. “These days of fall camp, there’s a lot going on, and we only have eight practices before school starts. I thought coach (Rashad) Jackson in our special teams meeting had a great saying. He said, ‘Be 1-0 every play.’ We always talk about being 1-0 every week, but it made sense. We’re going to make mistakes. I’m going to make mistakes. Our players will make mistakes, but we’ll do it full speed, learn from our mistakes and get better.”

The Demons continue fall camp Saturday morning with a 9:15 workout at Turpin Stadium as they continue to prepare for the Sept. 4 season opener at North Texas.