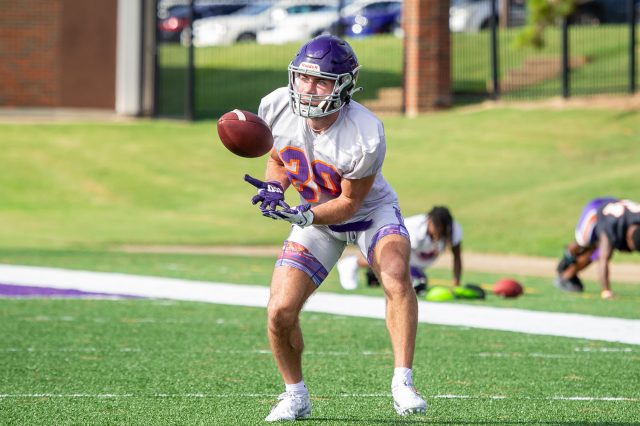 The Demons gathered as a team for the first time in preparation for the Sept. 3 season opener at Montana on Wednesday, going through a roughly two-hour practice on the new turf at Turpin Stadium.

“When you reflect on practice one, we were able to get back out there and were able to practice,” fifth-year head coach Brad Laird said. “Coaches, players, trainers, managers, everyone has to get back into the routine of making it flow throughout practiced.

“We’ll be better Day Two. When you talk about the Xs and Os, we’ll be better Day 2. There was great energy. Was it consistent energy? Probably not. I’m going to hold the older guys accountable. They talk about what they want to do. To do that, you have to be consistent and locked in for 22 periods, and that’s not always easy – but winning championships isn’t easy.”

Laird has been joined on the Demon roster by senior defensive end Isaiah Longino since Laird returned to Northwestern State as the defensive coordinator in 2017.

For Longino, Tuesday’s practice marked his final first day of camp as a Demon – one where he is an unquestioned veteran leader on the team.

“We definitely need to get used to the conditioning,” said Longino, a native of Humble, Texas. “It’s not the same as summer workouts, but I’m definitely happy that I took advantage of all the moments I had out there. It was good to be out there with my team.”

While Laird and Longino have been around the Demon program for years, several newcomers made impressions on the first day of camp.

“You saw guys we expect to make plays in all three phases do it,” Laird said. “Whether it was a freshman or a newcomer we’re counting on to either provide depth or have a solid role, you saw them step up and make plays.”

There were plenty of plays made on both sides of the ball in the first of the Demons’ 25 practices ahead of the Sept. 3 game at Montana, giving NSU a base to build upon.

“It’s Day One,” said wide receiver Jaren Mitchell, a wide receiver who transferred to NSU this past spring from Northern Colorado. “There were a lot of guys picking each other up. There are going to be mistakes. We were knocking the rust off. It was your typical first day, getting back into the feel of it.”

Acknowledging there are steps forward to be taken, Laird found plenty of positives on the opening day of full-squad practices.

Said Laird: “That’s the fun thing about the 25 practices we have, we’ll find out the guys we can count on come Sept. 3.”