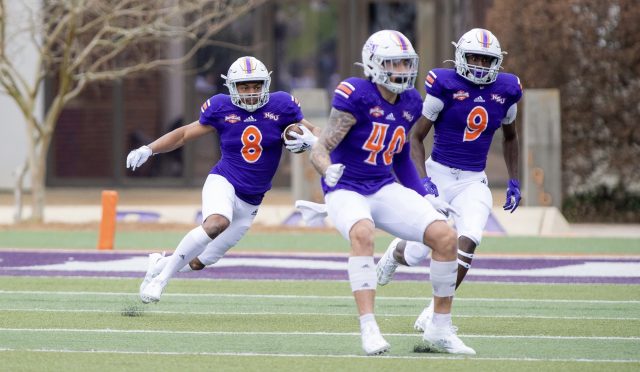 “You go back to what these young men had to endure to have the opportunity to compete last spring,” fourth-year head coach Brad Laird said. “Not only was it COVID, but it was the ice storm and delaying the opener. To be able to start with a non-conference game in Denton, Texas, an area where a lot of our guys have family – that’s what it’s all about. They have the ability to support these young men who have put in so much work to have this opportunity to compete for 60 minutes. Sometimes we forget about that. This is Week 1. You don’t get it back. We’ll be ready.”

Northwestern State played six games in a truncated spring season that ended April 10 with a 49-47 win at Incarnate Word on a walk-off field goal by Eddie Godina. The postponed season led to an offseason that was roughly half as long as a typical break for a college football team.

Laird and his charges are not concerned with that as they prepare for a Mean Green team that went 4-6 in 2020 and played in the inaugural Myrtle Beach Bowl in December, falling to Appalachian State, 56-28.

“It’s definitely something we had to get used to,” preseason second-team All-Southland Conference offensive lineman Jakob Sell said. “That short turnaround period, not everyone’s done that before. I think our team handled it well. Everybody in the offseason – whether they were here or not – was putting in work. We made the most of the time we had.”

Saturday’s matchup marks the second time in Laird’s four seasons Northwestern State (1-5 in the spring) will open against an FBS opponent. Regardless of who is across from them, the Demons will be happy to see someone not wearing a white or black practice jersey.

“Camp’s been great, but you get to the point after 23, 24 practices where you look forward to the opportunity to line up against somebody else and see what this football team is about in a 60-minute situation vs. another opponent,” Laird said. “Our guys are ready to play and are ready for the opportunity.”

Sell concurred with his head coach.

“I know, especially for the O-line, we can’t wait to hit somebody else,” he said. “I feel like we have a great team this year, and we’re going to show the work we’ve put in over the offseason.”

Sell is one of a gaggle of Demons who have ties to the Dallas-Fort Worth Metroplex, of which Denton marks the northern edge.

Sell grew up in Dallas while senior safety Donovan Duvernay did so in nearby Sachse. The two University of Texas transfers, who were locker neighbors with the Longhorns, share a sense of excitement for the return of fall football and the chance to play in front of their families.

“It feels really good getting back into a normal season,” said Duvernay, whose brother, Devin, a Baltimore Ravens return specialist and wide receiver will be in attendance. “I’m really excited to play in front of my family in a packed house. I’m ready to go.”

Like Sell, Duvernay was a preseason All-Southland Conference second teamer, earning the nod at return specialist. In his debut season with the Demons, Duvernay ranked sixth nationally and second in the Southland Conference in kick return average at 28.3 yards per return, coming close to breaking free for a touchdown on a few occasions.

While the Demons hope that will not change, they are expecting to see at least a slight difference in the Mean Green, which has a new defensive coordinator in veteran Phil Bennett.

Saturday’s game can be seen on ESPN+ and can be heard on the Demon Sports Network, flagshipped by 94.9 FM The River in Natchitoches. Free streaming audio will be available through www.NSUDemons.com and the Northwestern State Athletics mobile app, which can be downloaded free through the Apple Store and Google Play.