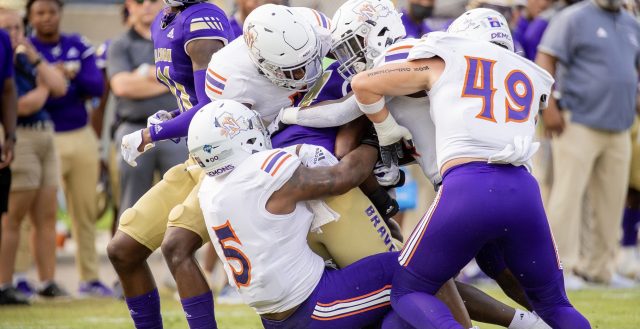 Then the north end of Spinks-Casem Stadium struck again.

Alcorn’s Felix Harper spun into that end zone on a 1-yard touchdown run with 4:11 to play, capping a Braves’ fourth-quarter rally that dropped Northwestern State, 13-10, in non-conference action.

“In that type of ball game – as well as we played defensively for four quarters – the opportunity they had – the one big play – puts you in a tough situation,” fourth-year head coach Brad Laird said. “Defensively, we played well. We played hard. We were able to get off the field. When you’re in those tight games, it’s often that one play.”

While Harper’s touchdown regained the lead for Alcorn (1-1), the one play the Demons (0-2) would like to have back came on third and 10 from the Braves 46.

Harper found Manny Jones for a field-flipping, 50-yard completion that gave Alcorn a first-and-goal at the NSU 4.

Even then, it took the Braves three cracks from the 4 before Harper twisted in for the go-ahead score.

“Last week, it’s on film – we had 28 missed tackles,” said senior linebacker Ja’Quay Pough, who finished with 12 tackles and a sack. “This game, we weren’t letting it happen again. We had to prove our defense is still top-notch in the conference.”

The Purple Swarm limited Alcorn to 122 yards on 41 carries, an average of 3 yards per rush in a game where neither team found much running room.

Fletcher’s grab put the Demons up 7-3 with 49 seconds to play in the first quarter, but the Demons barely were able to put any additional distance between them and the Braves.

While the Purple Swarm held the Braves to 146 yards and three points in the middle two quarters, Alcorn kept the Demons similarly at bay.

For the second straight week, Northwestern State was in position to seize the momentum immediately after halftime.

PJ Herrington, playing roughly 40 miles from his hometown of Natchez, returned the opening kickoff of the half 41 yards to the NSU 47, and the Demons were off and running until a pivotal third-down play in the shadows of the north end zone.

Facing third-and-goal from the 3, Fletcher lost the handle and dove on the ball at the Alcorn 15-yard line. Eddie Godina shook off a delay of game penalty to hit his first field goal of the season – a 37-yarder – to put the Demons back up seven.

“We talked about coming out of the gates in the second half, and we did that, getting the ball down there,” Laird said. “Having the opportunity on third down and then settling for the field goal … then they get the seven points late, and that was the difference in the ball game.

“In this type of football game, when you play this well defensively and you don’t have that many chances offensively, you have to take advantage. I’m proud of our guys and the way they fought. This football game is one we have to win in the fourth quarter.”