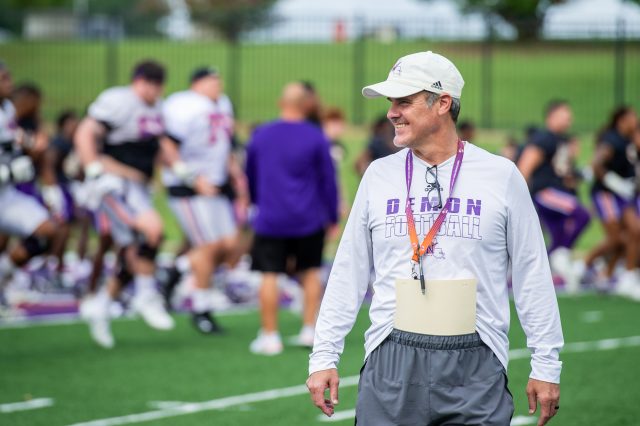 NATCHITOCHES – Fifth-year head coach Brad Laird can boil down his goals for Saturday’s first intrasquad scrimmage of fall camp to one word.

“The word we keep talking about is consistency,” Laird said. “We want to see that in all three phases.”

Laird and the Demons are set for a roughly 100-play first “preseason game” that will kick off at around 9:30 a.m. Saturday.

In addition to serving as the ninth of 25 practices ahead of the Demons’ Sept. 3 season opener at Montana, it will mark the first time the 2022 NSU squad will deal with officials in a game setting.

“It’s always good to have those guys here, especially this year,” Laird said. “Every two years, you have true rule changes and things that they have tweaked. That’s one of those years. It’s always good to be able to ask them questions and for them to see us live. They do a great job of sticking around after practice, answering any questions we have.

“That holding call may not get called in a Tuesday afternoon practice, and you don’t realize how costly it is until it really happens.”

Saturday marks the first full-scale fall effort for the Demons, who are incorporating new coordinators on each side of the ball.

“You talk about the six new coaches, but we also have five new graduate assistant or volunteer coaches who play an important role in the development of this team,” Laird said.

“This Saturday morning will be an opportunity to get a feel of what the game will be like. We’ll be in the press box. We’ll have headsets. We’ll start to get an idea of how a true game day is going to happen, not just for the players and the 100 snaps between the lines but for the coaching staff as well.”

That is not to say there isn’t importance for what happens between the lines.

“This Saturday morning is going to tell us a lot,” Laird said. “We’ve got some guys we want to see step up and certain positions. Who’s going to step and be that one? Also, who are the guys who are going to step up and provide depth? This scrimmage will give us the opportunity to see where we are through nine practices.

“We’ll sit down Monday as a staff and see have we got it down from 110 to 80 or 90 and see where we are. Those guys who are twos and threes, where do they fall on special teams? It’s not just offensively and defensively, but what they can do from a special teams aspect.”

TRAFFIC NOTE: Saturday is one of two move-in days for Northwestern State students. All gates will be open, but traffic likely will be more prevalent than on most Saturday mornings.