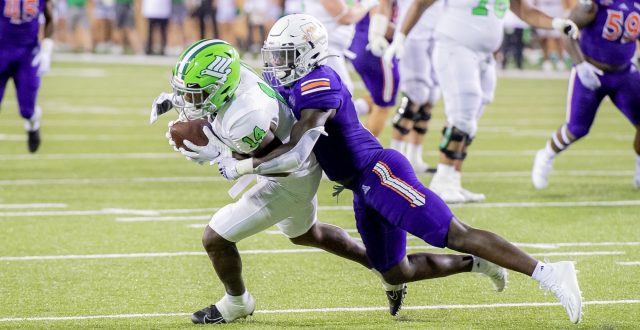 LORMAN, Miss. – It does not take much to get PJ Herrington excited.

However, Northwestern State’s energetic junior safety has been a little more fired up than usual this week because of Saturday’s destination.

Herrington and the Demons will make their first appearance at Alcorn in more than three decades Saturday, facing the Braves at 6 p.m. at Spinks-Casem Stadium, which rests 38 miles northeast of Herrington’s hometown of Natchez, Mississippi.

The game can be heard on the Demon Sports Network and its flagship station, 94.9 FM The River. Free streaming audio is available through the NSU Athletics app, which can be downloaded free through the Apple Store or Google Play, and on www.NSUDemons.com.

Streaming video is available through www.AlcornSports.com.

“I’m every excited,” said Herrington, who led the Demons with nine tackles at North Texas in the Sept. 4 season opener. “Being close to home will feel like a home game. I know a lot of people who play at Alcorn. I’ve got a lot of family and friends who go to Alcorn. I’m looking forward to going out and competing against family and friends and winning in the end.”

Alcorn did not compete in either the fall 2020 season or the spring 2021 season because of the COVID-19 pandemic.

In the Braves’ most recent season, Alcorn posted a 9-4 record in 2019, winning the Southwestern Athletic Conference championship and playing in the Celebration Bowl against North Carolina A&T.

A change at quarterback sparked the Braves’ 8-2 finish to that season as Felix Harper took over and led an offense that averaged 36.8 points per game in those 10 games.

“He’s a left-hander who is dangerous,” fourth-year head coach Brad Lairds aid. “You go back to 2019 when they won the SWAC. He didn’t play until the second half of the McNeese game (in Week 3). One he took the reins of that program, they dominated. He can beat you with his legs and his arm. He’s a great quarterback and has great command of what they do offensively.”

Northwestern State moved the ball well against North Texas, collecting 418 yards against the Mean Green, including 214 on the ground – the Demons’ most rushing yards against an FBS foe since 2015.

NSU’s season opener marked its first matchup against North Texas in more than two decades. Saturday’s game at Alcorn resumes a series that has not been contested in 38 years when the teams concluded a home-and-home series in Lorman. The series is tied 1-1 with each team winning on its home field.

Still, there is familiarity on the rosters.

“I’ve got friends – EJ Woods, Kee Wayne (Jones) – who play at Alcorn,” Herrington said. “When we found out we were playing each other, it was the topic of the summer while we were working out. I’m looking forward to having some fun competing against them.”

Similarly, there is at least one player with whom most of the Demon roster is familiar.

Alcorn running back Stadford Anderson played three seasons at Northwestern State from 2017-19, rushing for 934 yards in that span before transferring to Alcorn.

“He had 128 yards in their opener,” Laird said. “I texted him after that game. It’s good to see him back in it and having success. We root for him on other nights except when we play him. He’s one we’ll have to do a good job of containing and tackling when we have that opportunity.”

Herrington echoed part of his coach’s comments when discussing what improvements the Purple Swarm defense could make from Week 1 to Week 2, focusing on tackling.

Herrington said the NSU defense, while forcing North Texas quarterback Jace Ruder into a pair of interceptions, missed several opportunities to capitalize on tackles for loss or to get off the field.

Still, there were plenty of positives from the Demons’ season opener they will take with them into their first visit to the Magnolia State since 2015.

“Week 1 gave us a good measuring stick,” Laird said. “We knew what North Texas was about. We know where we are. One thing we found out is it’s more about us. It’s more about our execution and our preparation to be the best we can be come six o’clock Saturday.”