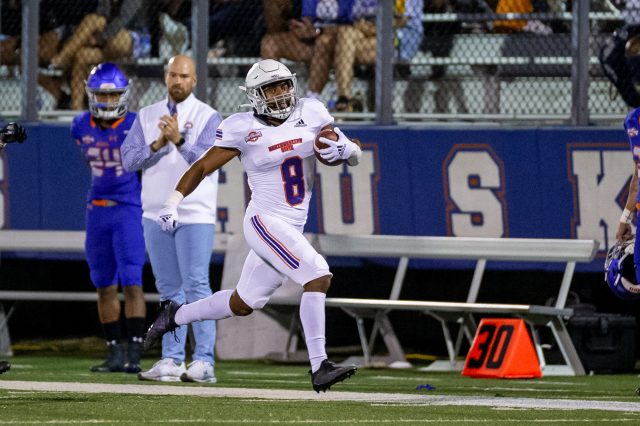 NATCHITOCHES – Different will be the adjective of choice for Saturday’s Senior Day game for the Northwestern State football team.

When the Demons host Houston Baptist at 3:05 p.m., they will honor 10 sixth-year seniors who will play their final home game at Turpin Stadium.

Saturday’s game will air on ESPN+ and will be broadcast on the Demon Sports Network, flagshipped by 94.9 FM The River in Natchitoches. Free streaming audio is available on www.NSUDemons.com and through the Northwestern State Athletics mobile app, which can be downloaded free for Apple and Android devices.

“It’s something that hasn’t been done when you talk about sixth-year seniors,” fourth-year head coach Brad Laird said. “Of those 10, a couple have been here all six years. Some have been here for one year, some for two or three years. There are a lot of different journeys we want to honor.

“That was one of the messages to the team. We’ll all be in that situation someday – the last opportunity to play at Turpin Stadium. You need to take pride in being able to play for those guys.”

Another difference for Northwestern State (1-7, 1-4) will be the opponent.

For the first time this season, the Demons will face a Houston Baptist (0-8, 0-5) team they already played. NSU won the first half of the two-game season series, 21-17, in Houston on Oct. 9.

In that matchup, the Demons trailed by three points entering the fourth quarter before SirMichael Veasley’s first career touchdown put the Demons up 14-10 early in the final quarter. After losing the lead, Northwestern State regained it again on Zachary Clement’s 2-yard score with 7:17 to play.

“As you go back and look at it, you see some growth in the way the game was won,” Laird said. “There are a lot of things we know we can do better. Penalties are one. We had 14 in that win against Houston Baptist, and we had 11 last week. I’ve got to do a better job, bottom line, of making sure this team eliminates selfish and undisciplined penalties.”

The matchup with the Huskies marks the start of three straight rematches to close the season. Following Saturday’s home finale, the Demons travel to Southeastern on Nov. 13 and to McNeese on Nov. 20 in their final two games.

“I don’t know if challenge is the right word, but it’s different, no doubt,” Laird said of facing teams twice in a season. “We have not been through that yet. In the NFL, it’s common within divisions. It’s another opportunity for us, and we look forward to it.”

“If you look at the start of that football game four weeks ago, you’re going to see a different starting quarterback for both teams,” Laird said. “That’s one of the differences. Even though it’s the same teams, there are some differences. That will play into our preparation this week.”