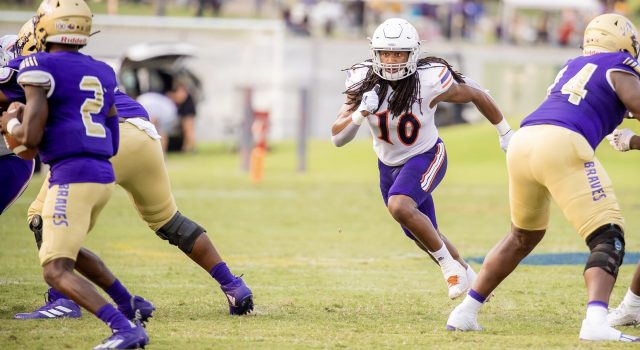 NATCHITOCHES – For fourth-year head coach Brad Laird, there is nothing like running through the purple smoke ahead of a Northwestern State home football game – especially in the fall.

For the first time since November 2019, Laird will lead his alma mater through that wafting smoke in the south end zone of Turpin Stadium for a home fall football game as the Demons wrap up their non-conference slate by hosting UT Martin at 6 p.m. Saturday.

“I don’t know if there’s anything better,” Laird said of running onto the Turpin Stadium turf. “Yes, we played here in the spring, but you have to go back to the fall of 2019 as the last time we had everybody in the stands and everything that goes along with playing at home and is part of the home-field advantage. Our community supports us and our university supports us so well. For our guys to have that opportunity to come out of that locker room and run through the purple smoke is something you look forward to and can’t wait for that opportunity to come Saturday.”

Saturday’s game can be seen on ESPN+ and will be heard on The Demon Sports Network and its flagship station, 94.9 FM The River in Natchitoches. Free streaming audio is available through www.NSUDemons.com and the Northwestern State Athletics app, which can be downloaded free for Apple or Android devices.

As the Demons (0-2) prepare for their long-awaited fall Turpin Stadium return, several NSU players will take lessons learned from the six-game spring season with them into the matchup with the visiting Skyhawks (1-1).

Starting rover Keenan Leachman is one of those.

A Baton Rouge native, Leachman’s play in the spring helped the former walk-on earn a scholarship and lock down a spot in the starting lineup. Through two games, Leachman has tallied nine tackles, building off his productive spring season that featured 20 tackles (one for loss), a fumble recovery and a pass breakup in six games.

“In the spring, I felt it click,” Leachman said. “Everything was coming easier. My leadership role increased. My part on the team increased.”

Leachman and the Purple Swarm took a step forward against Alcorn this past Saturday, limiting the Braves to less than three yards per rush attempt (122 yards, 41 attempts) and keeping the Braves from reaching the end zone for nearly 56 minutes.

Still, Leachman and his teammates expect to take another leap against the Skyhawks, who are coming off a 33-27 win against Samford.

“We have to fix the little mistakes – being in the right gap, being on the same page in coverage,” he said. “I feel like that will help us take an even bigger step in Week 3.”

Saturday’s game marks the fourth meeting in the series between the Demons and Skyhawks. The first two came in back-to-back seasons – 1965 and 1966 – before the series resumed in 2019 in Martin, Tennessee.

Although the teams met roughly 25 months ago and the NCAA granted an extra year of eligibility to those affected by the COVID-19 pandemic, there are numerous Demons who did not appear in that 42-20 UT Martin win in 2019. Even those who did may find themselves in a different role.

“There are some similarities but also some differences, schematically or personnel-wise,” Laird said. “Offensively for them, it’s different from the spring based on their transfer quarterback from Tulane (Keon Howard). They were down 17-0 and had five turnovers (against Samford), and to be able to come back tells you a lot about them. They’re a great team coming to Turpin Stadium, and we look forward to playing them at home. We are different from 2019 just like they are.

“Take Isaiah Longino. At the time, he was running down on the kickoff team and playing linebacker. He tears his ACL in that game. Fast forward to 2021, and he’s changed positions. He’s become a great player and a great leader for us.”