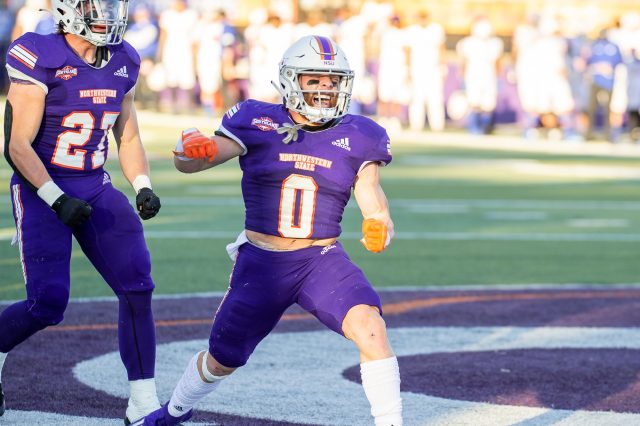 NATCHITOCHES – Same result, a very different way of getting there.

The Northwestern State football team could not have scripted a better way to send off its seniors Saturday night, producing its highest-scoring quarter of the season to cap a come-from-behind, 28-24 Southland Conference victory against Houston Baptist at Turpin Stadium.

“It was kind of the same script when we went down there,” said receiver Gavin Landry, who was one of 10 sixth-year seniors honored before the game. “We did it a little more through the air tonight. It’s crazy to go out like this – fighting, clawing, scratching. We said we were going to play for the seniors and play for the man next to us.”

The visiting Huskies (0-9, 0-6) looked poised to spoil Northwestern State’s Senior Day, zipping to a 17-0 first-quarter lead during which they outgained the Demons 186-1.

From there, the Purple Swarm settled in and lived up to its nickname. The Demons (2-7, 2-4) surrendered 160 yards in the final three quarters and recorded nine tackles for loss for 40 yards in the game.

“A lot of the stuff we watched on film was different,” said junior cornerback William Hooper, whose fourth-quarter interception helped launch NSU’s 22-point, fourth-quarter barrage. “They had a totally different scheme this time. We had to take it into halftime and adjust. We decided to buckle down and play for the seniors.”

NSU’s seniors played for themselves as well.

With quarterback Zachary Clement’s status uncertain for the game, the Demon coaching staff decided to use Landry, a former high school quarterback, in short-yardage situations.

It paid dividends in the fourth quarter as Landry scored the first two rushing touchdowns of his Demon career, a journey that began as a walk-on in 2016.

“Not knowing what our quarterback situation would be, we knew he had the ability in a goal-line situation,” said fourth-year NSU coach Brad Laird. “He took advantage of it, not only the two rushing touchdowns but the big catch and run to get us in position for the go-ahead touchdown.”

Much like the final 15 minutes Saturday night, the final of three straight go-ahead touchdown drives between the teams was as unscripted as possible.

With the Demons trailing 24-21, Landry caught a pass from Clement and broke free for a 52-yard gain to the Husky 5-yard line.

Three plays later as Landry surged forward looking for this third rushing touchdown of the game, the ball came out and senior tight end Javonis Isaac corralled it in the end zone for the go-ahead score.

While Landry was denied his third touchdown, Isaac was in position to recover his third fumble of the day and score his second touchdown in a Demon uniform, doing so with 36 seconds to play.

“To be honest, it’s about being in the right place in the right time, taking care of your job and just pushing the team and fighting through the whistle,” Isaac said. “We let everyone know (earlier in the game), it’s not over year. Be patient with it. There’s a lot of time left. Believe in the coaches and we’re going to finish strong.”

Much like the Demons’ first win in the two-game season series, the Purple Swarm needed one final stop to seal Northwestern State’s season sweep.

Behind three passes from Orion Olivas to Tyson Thompson, the Huskies moved from their 32 to Northwestern State’s 27 with 3 seconds to play.

Fittingly, Jared Pedraza and Nathalohn Nanai combined to sack Olivas for a 15-yard loss as time expired, setting off a raucous celebration on the NSU sideline.

It capped a busy night for Pedraza, who notched 12 tackles including 1.5 for a loss.

“They had us on our heels early,” Laird said, “but 100 percent credit to our players and coaches. The job they did tonight after being down 17-0 right of the bat – for our guys to continue to fight back and make plays – at any point, they could have given in and they didn’t. I couldn’t be more proud of a group that continued to fight and make plays. They earned it and deserved the opportunity to win the game.”

The Demons start a season-ending, two-game road trip at Southeastern on Nov. 13. Kickoff is set for 6 p.m. in Hammond.