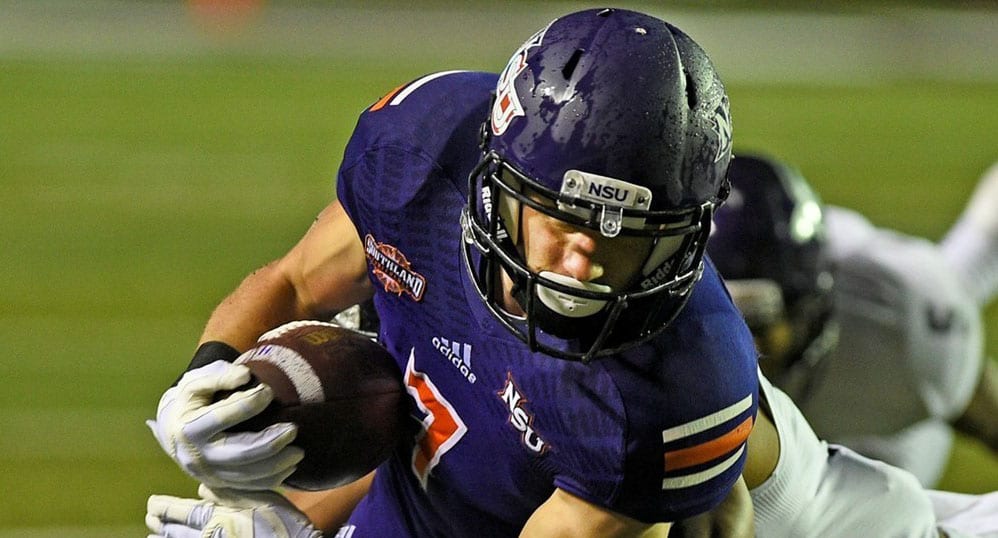 NATCHITOCHES — After Northwestern State’s De’Mard Llorens tied a touchdown rushing record in the rain this past week, Ed Eagan defied weather conditions to tie a record through the air.

The senior made the record-tying catch on a 65-yard touchdown strike from quarterback Stephen Rivers to give NSU a 33-7 lead midway through the third quarter. Eagan had another catch wiped out by a penalty and dropped a first-half pass to keep the New Orleans native from owning the record by himself.

“Ed had a great game, and Stephen threw the ball exceptionally well to him,” said NSU head coach Jay Thomas. “Everybody is competitive and they want an opportunity to win the game every week, but this week we really needed our receivers to catch the ball.

“Passing the ball that much was part of the plan, even though the weather wasn’t great unfortunately. The receivers protected the ball and handled it well in the rain, and that’s important because Abilene is very physical in the box.”

Eagan started the game with a bang, returning the opening kickoff 55 yards to set up Rivers’ 3-yard touchdown pass to Cody Jones and a 6-0 lead.

“I wanted the (receptions record), but I’m just happy I had a good game and the offense is rolling,” Eagan said. “Abilene plays a cover three in which they try to keep everything in front of them, so that helps a guy like me.”

Rivers had his best game of the season, throwing for a career-high three touchdowns to go with 272 yards. The former SEC quarterback completed 21-of-28 passes, using his arm strength to cut through constant wind and rain.

The win is NSU’s third in four games, pushing the Demons record to 3-6 and 3-4 in the Southland Conference.

After ACU took a brief 7-6 lead with a Dallas Sealey 11-yard run, NSU answered with a 75-yard drive capped by a Llorens 4-yard touchdown run to take the lead for good.

The Demons rattled off a total of 33 straight points to grab a 39-7 edge, aided by a 2-yard Shakeir Ryan touchdown catch and a Chris Jones 37-yard touchdown run.

Abilene Christian (2-7, 2-6 SLC) scored two touchdowns to cut NSU’s lead to 39-22 before nearly recovering an onside kick, but the Demons’ defense continued its dominance to close out the win.

The Demons will try to carry its momentum to a ranked Sam Houston State this Saturday.