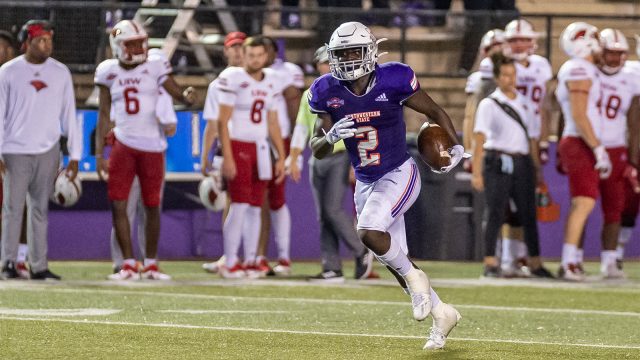 NATCHITOCHES – The Northwestern State football team checked off some of what it needed to do Saturday night against Incarnate Word.

The Demons won the turnover battle against the Cardinals inside Turpin Stadium, but UIW took better advantage of NSU’s miscues as the visitors scored a 38-27 Southland Conference victory.

“I’m disappointed for the guys,” fourth-year head coach Brad Laird said. “They deserved the opportunity to win the game. One thing we talked about today was finish – not necessarily finishing the game but finishing each play, doing your job. I thought our guys did that.”

For the second straight week, the Demons (0-4, 0-1) found themselves down double digits in the first quarter as UIW (4-1, 2-0) used its quick-strike offense to build a 14-0 advantage less than seven minutes into the game.

From there, the Purple Swarm defense settled into the pattern it displayed against UT Martin on Sept. 18, playing more soundly in its assignments and cutting down on missed tackles.

After surrendering 28 first-half points, the Demons allowed just 10 in the second half, allowing NSU to slice an 18-point lead to eight late in the third quarter.

The deficit could have been even less had Northwestern State taken better advantage of the Cardinals’ three turnovers.

NSU turned its three extra possessions into just seven points as Kaleb Fletcher hit Javonis Isaac for a 1-yard score with 5:01 to play in the third quarter, cutting UIW’s lead to 28-20. It was Isaac’s first career touchdown catch in a Demon uniform and part of a career-best 319-yard passing game for Fletcher on 36-of-48 passing.

“(Winning the turnover battle) was one of the big keys – us coming in minus-4 and them coming in plus-4 or plus-5,” Laird said. “That was one thing we had to do. Now, we have to take the next step when we get those opportunities and turn them into points. We weren’t able to do that tonight.”

Isaac’s touchdown catch came after the first of two PJ Herrington interceptions as the junior safety stepped in front of a Cameron Ward pass at the 50 and returned it 7 yards to the UIW 43. Five plays later, Fletcher found Isaac on a play-action pass, capping a drive where NSU moved the ball exclusively through the air.

“(During) the second half, we knew we had left a lot of plays out there in the first half,” said Herrington, who finished with a team-high eight tackles, 1.5 tackles for loss and a forced fumble in addition to his two picks. “Starting off slow hurt us. In the second half, we warmed up and we just play.

“In high school, my freshman year, I had three picks in a game. It was something I never thought I’d experience again, but God blessed me to make plays like that.”

The Demon offense made enough plays to record a season-high 501 yards, but two plays loomed large as Northwestern State lost a pair of fumbles inside the UIW 10-yard line.

Although the Cardinals were unable to convert those into points, the Demons returned that favor in the third quarter. Jared Pedraza recovered a muffed punt – his third fumble recovery in the past two games – at the UIW 27.

However, the Demons managed just three yards and came up empty as Eddie Godina’s 39-yard field goal drifted wide left, leaving Northwestern State down 28-13 with 9:00 to play in the quarter. Godina did connect on attempts of 30 and 40 yards in the first half.

“We did a pretty good job moving the ball, but we have to avoid those three and outs and avoid those two turnovers,” said Fletcher, who completed a career-high 36 passes in 48 attempts with a pair of touchdown passes. “Turnovers in the red zone really bit us. We’re still going forward. We still have things to work on.”

Down 21-3, Fletcher found Jay Griffin on a slant and the two-time Mountain West 200-meter champion flashed his sprinter speed, finishing a 53-yard catch-and-run touchdown – one of three scoring plays of more than 50 yards between the teams.

The Cardinals answered Griffin’s bolt with one of theirs as Ward connected with Kevin Brown on a swing pass the running back turned into a 54-yard touchdown that gave UIW a 28-10 lead with 5:48 to play in the first half.

“Early on, with some of the setbacks we had, it would have been easy for the guys to lay down, but they didn’t,” Laird said. “I couldn’t be more proud of their effort. I told them after that, this thing is going to turn. We continue to put the work in, we continue to fight and finish and play for each other – things are going to turn.”

The Demons return to action Oct. 9 at Houston Baptist in their Southland Conference road opener. Kickoff is set for 6 p.m. at Husky Stadium.