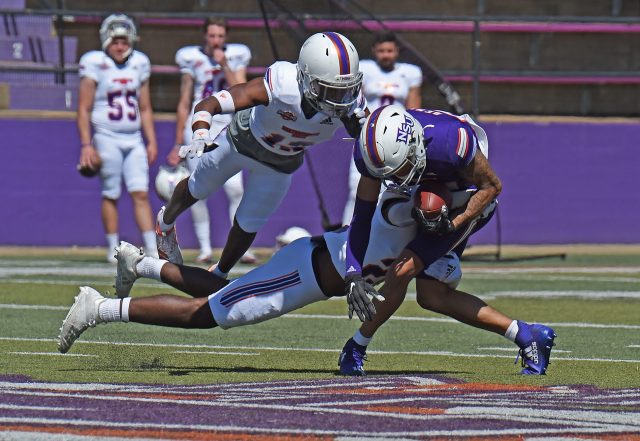 NATCHITOCHES – From the first play to the last of Saturday afternoon’s 31st Annual Joe Delaney Bowl spring football game there was one common thread – energy.

There was a noticeable buzz among the Northwestern State faithful in attendance following the spring camp finale thanks to the effort and spirit from the Demon football team.

“We’ve had a lot of good competition this spring and I thought you saw that on the field today,” head coach Brad Laird said. “We started faster defensively than we had previously and then the offense was able to make some plays as the day progressed. We’ve seen that throughout and as a head coach that’s what you want to see, both sides being able to do positive things throughout the camp.”

A pair of sacks on the first two possessions of the game set the tone early for the Purple Swarm defense who forced another four turnovers on the day with five sacks and plenty of pressure on the NSU quarterbacks.

Junior defensive lineman JaBralen Yarber led the backfield pressure with a pair of sacks and three other tackles. He nabbed Kaleb Fletcher trying to escape the pocket to end the second possession and give the defense its first three-and-out of the day.

“We have new defensive line coach and he came in here and really got things going,” Yarber said. “Everybody is feeling comfortable and we’ve been working. Every day is pass rush, pass rush, pass rush and that’s what came out today in the scrimmage.”

The rush wasn’t able to get to Zachary Clement on the next possession however as he connected with Javon Antonio on a pair of long completions to get the Demons into the endzone on a 19-yard pass.

Clement just missed a 95-yard touchdown pass on his fifth drive of the day seeing the ball bounce off the fingertips of Zach Patterson on a seam route. Forced out of the pocket on the next snap, Clement was intercepted setting up one of the handful of short fields of the day.

The NSU defense held, allowing just a 26-yard Eddie Godina field goal, and got its second takeaway of the day on the next drive on a batted ball interception around the offensive 15-yard line.

“When you play hard and with that type of effort those things happen,” Laird said. “The times they work on that in practice is carrying over into scrimmages. That’s an important key to victory and it’s going to be important for us defensively to get those takeaways.”

“We started off a little slow defensively last time, so we definitely came out with high energy on defense today,” linebacker P.J. Herrington said. “Our word this week was dominate so we wanted to come out with everything that we could. No matter what just go full speed and put it all on the field and let the coaches know that we can do it.”

The offense found its footing and stride in the second half of the day, getting a Scooter Adams 10-yard scamper for a touchdown, following a mishandled reverse and fumble on the play prior, and the big play of the day a 67-yard score from Clement to LC Greenwood, his only catch of the day.

Andy Pierre-Antoine made a spinning, one-handed grab in the front corner of the endzone for a touchdown two drives later and Fletcher capped the day with a two-yard score on the scrimmage’s final play.

Both quarterbacks threw touchdowns in the game (Clement – 2, Fletcher – 1) and took their fair share of hits while contending against pressure from the front and throwing into small windows downfield.

Antonio led the receivers with five grabs for 102 yards and a touchdown and SirMichael Vesley led the ground attack with 34 yards on nine carries.

Isaiah Robinson and Ara Rauls III each grabbed interceptions in the game while Jared Pedraza and Race Moser each jumped on top of fumbles.

“The energy and how hard our guys are playing is something that day in and day out this football team has to bring,” Laird said about what he wants to see carry into the fall. “Be competitive and play hard. The Xs and Os will continue to come but we’ve got to be consistent when it comes to the plan in all phases.”