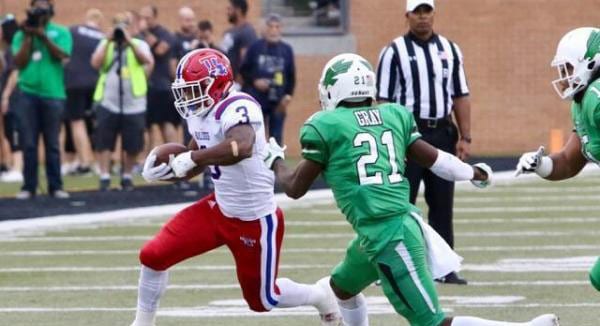 LA Tech’s six-game winning streak is the longest for the program since the 2011 season, while the Bulldogs have now won three straight over North Texas to lead the all-time series, 9-6, over the Mean Green.

Quarterback Ryan Higgins finished the day 18-of-30 for 253 passing yards and four touchdowns, while the senior became the seventh quarterback in program history to throw for 3,000 yards in a single season (third straight season a Bulldog quarterback has done it – Jeff Driskel and Cody Sokol). Higgins now has 30 passing touchdowns on the season, which is tied for sixth most in program history.

Former Haughton star Jarred Craft, a junior, rushed for 120 yards on 24 carries and scored a touchdown. Craft needs 75 yards in Saturday’s home game against UTSA to reach 1,000 for the season.

Less than two minutes into the game, Ryan Higgins connected with Carlos Henderson for a 52-yard touchdown reception, his 12th of the season, to give the Bulldogs an early 7-0 lead over the Mean Green in the opening quarter.

After LA Tech’s defense forced a North Texas punt on its first drive, the Mean Green received a gift when Henderson bobbled a catch on Tech’s next drive before a North Texas defender took it away for an interception at the 30-yard line. From there, the Mean Green drove down to the 1-yard line, where Jeffrey Wilson ran it in for the touchdown to tie the game at 7-7 in the first quarter.

Henderson found the end zone for the second time on an end-around where he out-ran the North Texas defense for a 24-yard rushing touchdown to put the Bulldogs ahead, 14-7, late in the first quarter.

North Texas tied the game at 14-14 on the next drive with a 77-yard scoring drive that ended with a 32-yard touchdown pass from Mason Fine to Terian Goree at the start of the second quarter of play.

Later in the second, Higgins connected with Kam McKnight for a 50-yard gain before the Bulldogs followed up by driving the rest of the way and scoring on a 10-yard touchdown catch by Henderson, his third score of the game, to give LA Tech a 21-14 lead over North Texas.

The Bulldogs took advantage of a couple of personal foul penalties against North Texas on its next offensive drive and extended their lead to 28-14 thanks to a two-yard rushing touchdown by Craft with 4:14 left in the first half.

North Texas followed up that score by driving 75 yards down the field and making it a one-score game on a four-yard rushing touchdown by Willy Ivery to cut LA Tech’s lead to 28-21.

LA Tech was able to extend its lead to 10 at the end of the first half when Jonathan Barnes connected on his 14th consecutive field goal, a 48-yarder to give the Bulldogs a 31-21 lead over North Texas at the break.

Tech had a chance to extend its lead early in the third quarter when Prince Sam intercepted Mason Fine to set up a field goal, but Jonathan Barnes could not connect on the 27-yard attempt to keep it a 31-21 ball game.

On the Mean Green’s next drive, North Texas kicker capitalized on LA Tech’s mistake with a career-long 51-yard field goal by Trevor Moore to cut the Bulldogs’ lead to 31-24 with 9:32 remaining in the third quarter.

LA Tech made up for missed opportunities on its next offensive possession when the Bulldogs drove 75 yards in just over two minutes and took a 38-24 lead over North Texas on Henderson’s fourth touchdown of the game, this one a 12-yard score for the Bulldogs.

Henderson registered his fifth touchdown of the game at the start of the fourth quarter on a nine-yard pass from Higgins to extend LA Tech’s lead to 45-24 over the Mean Green.

The Bulldogs return home next week for Homecoming versus UTSA Saturday, Nov. 12 at Joe Aillet Stadium in Ruston.