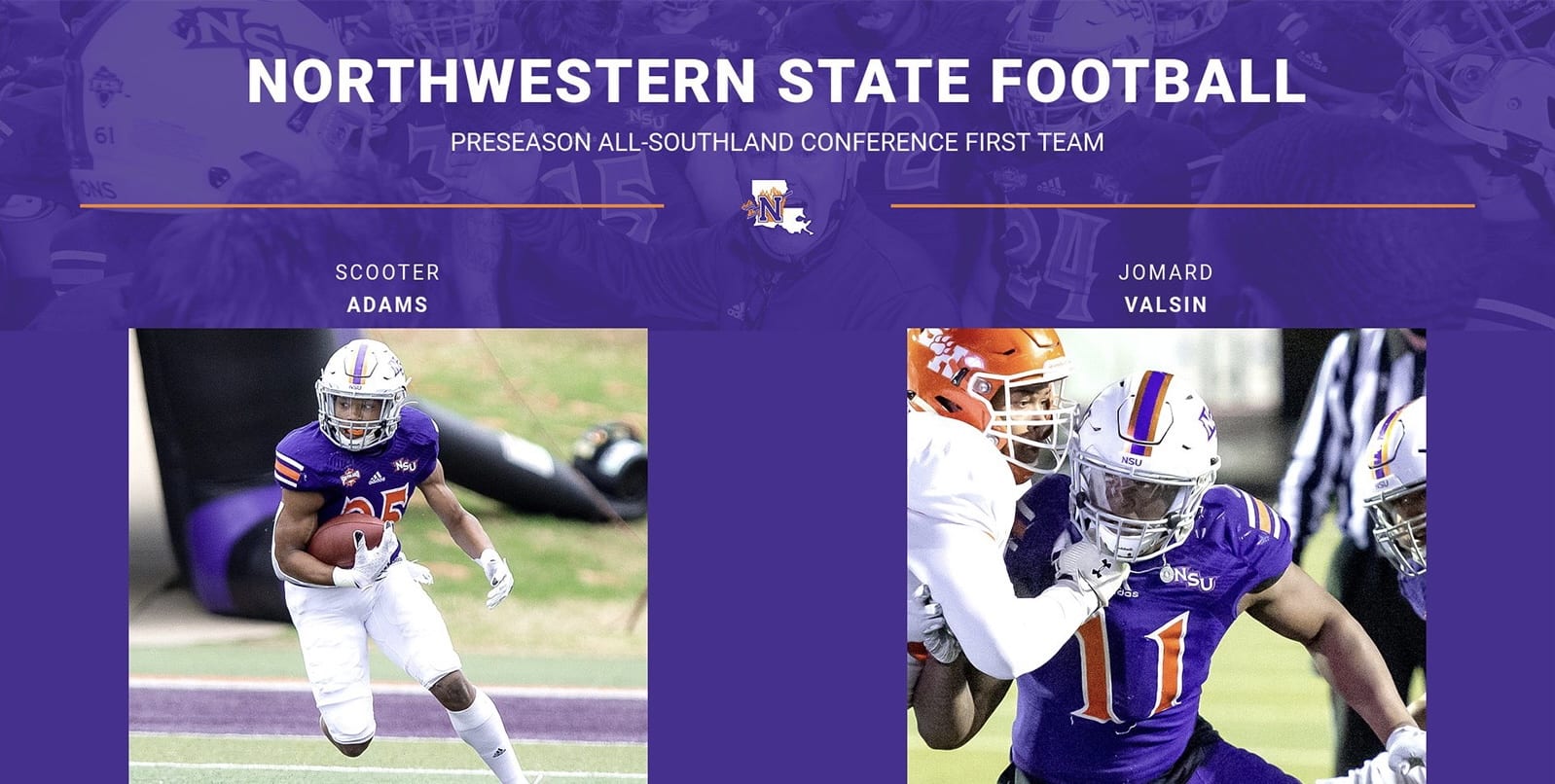 NATCHITOCHES – A pair of first-team selections — one on each side of the ball — lead a long list of Northwestern State players named to the preseason All-Southland Conference Football Team.

That duo was joined by seven second-team selections for the Demons, who open the 2021 season Sept. 4 at North Texas.

“Scooter and Jomard earned this honor for their production last season,” fourth-year head coach Brad Laird said. “They will be the first to tell you their teammates played a key role in their success. We look forward to all of our honorees continuing to work hard and lead this team into the 2021 season.”

Adams, a Kilgore College transfer, shined in his first action as a Demon, ranking second nationally with an 8 yards per carry average. In just six games, Adams rushed for 681 yards and seven touchdowns.

Valsin, a junior linebacker, continued to rack up tackles and tackles for loss in the spring.

A product of Port Arthur, Texas, Valsin tallied a team-leading 54 tackles, including a team-high eight for loss. Dating to the 2019 season, Valsin has recorded at least half a tackle for loss in 13 straight games.

Both Adams and Valsin were first-team All-Southland Conference selections in the spring.

The pair is joined by a trio of second-team offensive selections, including two offensive linemen.

A Harker Heights, Texas, product, Corbett-Canada was a second-team All-SLC pick this spring while Sell, a Dallas native, was a third-team selection.

Freshman All-America punter Scotty Roblow rounds out the offensive selections after averaging 41.8 yards per punt. Roblow dropped 11 of his 29 punts inside the opponent’s 20-yard line and had eight punts of at least 50 yards.

Duvernay, a Texas transfer from Sachse, Texas, averaged 28.3 yards per return on 18 attempts. His average placed him second in the Southland Conference and seventh nationally in the spring.

The Demon secondary is home to a pair of second-team preseason All-SLC picks as safety PJ Herrington and cornerback William Hooper were honored.

Herrington transferred from East Mississippi Community College and proved a quick study. Starting all six games, Herrington collected 35 tackles, broke up two passes, intercepted one and recovered a fumble in his first Division I experience.

Hooper, a junior from Shoemaker (Texas) High School, enjoyed the most productive season of his Demon career. He had eight of his 14 tackles in the final two games of the spring season and broke up three passes, intercepted another and blocked a kick against eventual national champion Sam Houston.

Both Herrington and Hooper were third-team postseason All-SLC picks this spring.

Linebacker Ja’Quay Pough filled one of the few spots that was open to voting, earning a second-team spot.

Pough started the spring season with a 16-tackle effort against Nicholls.