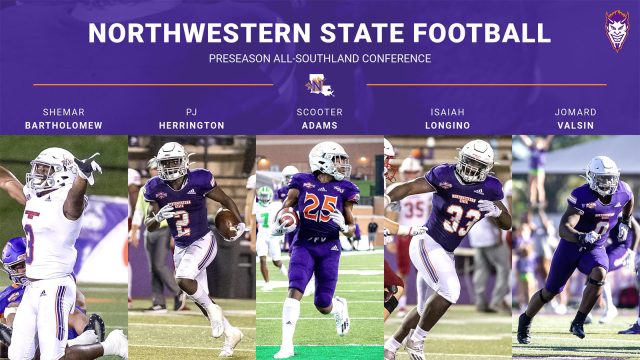 The preseason All-Southland Conference teams are presented by B1 Patches.

Cornerback Shemar Bartholomew and safety PJ Herrington are the Demons’ lone first-team selections, making up half the first-team secondary.

Bartholomew, a New Orleans native, earned second-team All-Southland Conference honors after intercepting two passes and breaking up six others. His nine career interceptions ranked him 27th among active FCS players at the conclusion of the 2021 season.

Bartholomew enters his final season as a Demon two interceptions shy of the career top 10 in school history.

Herrington, a transfer from East Mississippi Community College, has made an impact in his two seasons in a Demon uniform, averaging close to six tackles per game while adding three interceptions and three pass breakups in 15 career games as a Demon.

In the fall, Herrington ranked third on the team in tackles with 53 despite missing the final two games of the season.

Adams missed the final seven games of the 2021 season but finished as NSU’s third-leading rusher with 286 yards and a touchdown. In 10 career games, the Hallettsville, Texas, product has rushed for 967 yards and eight touchdowns. He was a first-team All-Southland Conference selection after the spring 2021 season.

The Demons placed a pair of senior defensive linemen on the second team as well.

Sixth-year senior Isaiah Longino and Jomard Valsin Jr. were named to the unit.

Longino enjoyed a breakout season in 2021, his first as a defensive linemen. The Humble, Texas, product recorded 9.5 sacks, ranking second in the Southland and seventh on NSU’s single-season list.

Longino enters the 2022 campaign with 15.5 career sacks, sixth most in Demon career history.

Valsin slides into the Beast position in new defensive coordinator Weston Glaser’s scheme after a season in which he recorded a team-leading 68 tackles (9.5 for loss), four quarterback hurries, three sacks, two pass breakups, a forced fumble and an interception.