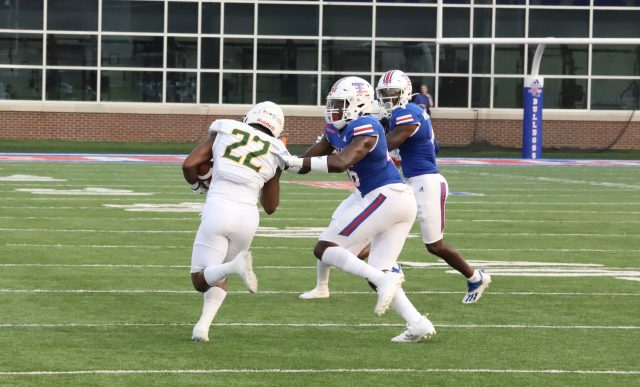 RUSTON — Louisiana Tech senior linebacker Ezekiel Barnett, a former Benton standout, was named one of 88 nominees for the 2021 Burlsworth Trophy, recognizing the most outstanding FBS player who began his career as a walk-on and has shown outstanding performance on the field.

In the award’s twelfth year, the Trophy is named in honor of Brandon Burlsworth, former University of Arkansas Walk-On and All-American offensive lineman. Burlsworth’s life is also the subject of a major motion picture, “GREATER”, which was released in 2016.

The Burlsworth Trophy is given to the most outstanding football player in American who began his career as a Walk-On and has shown outstanding performance on the field. Each nominee must have begun his first season of participation with FBS (D1) football program without financial aid of any kind from his university’s athletic department.

Barnett was a 2020 Burlsworth Trophy nominee and an all-Conference USA honorable mention. He has appeared and started a linebacker in all eight games of the 2021 campaign.

Barnett has registered a tackle in seven games, including a career-high-tying 10 tackles against SMU on Sept. 18. He has posted 1.0 tackles for a loss of five yards this season and two quarterback hurries. Barnett has had a hand in two turnovers this season after forcing a fumble against Southeastern (Sept. 11) and recovering a fumble at UTEP (Oct. 16).

Barnett walked on as a true freshman for the Bulldogs in 2016 where he took a redshirt year. As a redshirt freshman in 2017, he appeared in all 13 games while playing primarily on special teams, and he saw action in 10 games on defense as a sophomore in 2018. Barnett appeared in all 13 games as a junior in 2019 where he made four starts at linebacker and recorded 59 total tackles, including 41 solo. He appeared and started in nine games during the 2020 season where he finished fourth on the team with 49 total tackles.

“What a privilege it is to recognize these young men each year, those that chose to take on the challenge of beginning their college career as a Walk-On,” said Marty Burlsworth, President and CEO of the Burlsworth Trophy and older brother of Brandon. “We are excited to celebrate the achievements of these 88 players nominated for the 2021 Burlsworth Trophy. These extraordinary young men have put in the work and have earned this honor.”

Without one D1 scholarship offer, Brandon Burlsworth walked on at the University of Arkansas in 1994. He became a three-year starter and was eventually named an All-American in 1998. Burlsworth was selected as the 63rd overall pick by the Indianapolis Colts in the 1999 NFL draft, but was tragically killed in a car accident 11 days later. The Burlsworth Foundation was created in his memory and supports the physical and spiritual needs of children, in particular those children who have limited opportunities.

The Burlsworth Trophy award ceremony to honor the three finalists and to announce the 2021 winner will on December 6th at 7:00pm CST at Crystal Bridges Museum in Bentonville, Arkansas.