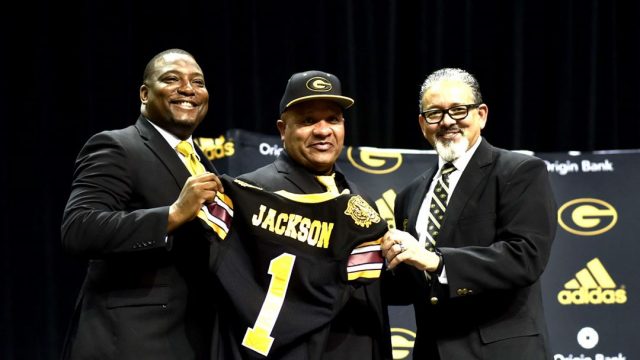 Jackson comes to Grambling State after spending the past year as the offensive coordinator and quarterbacks coach at Tennessee State University.

“It’s such an amazing day at Grambling and to see students represented here, to see faculty and staff, to see alumni, and former G-Men who have assembled here today,” Gallot said. “It’s is great to see everyone who is here today to witness the naming of our new leader of our football program.”

Jackson, who has more than 30 years of coaching experience at both the collegiate and professional levels, began his coaching career in 1987 at the University of the Pacific, his alma mater, and spent a majority of the next 13 years in the college ranks. He then moved to the professional ranks in 2001 and remained in the National Football League until 2019.

“In the decades that I’ve known this university, from the time of my youth in North Baton Rouge, I can vividly recall attending my first Bayou Classic at the age of 5, eating peanuts in the terrace section of the Louisiana Superdome. I can also vividly remember watching Until the day I was named athletic director, and every day since,” Scott said. “One constant that I know will never change. Grambling State University fans love a winner! I know GSU fans will love Hue Jackson.

“He knows that success in football means success in the classroom and in the community. Hue is a professional and winner in all areas of life and a mentor to some of the best professional football players in the NFL.”

Jackson spent three years as a graduate assistant at Pacific from 1987-1989 before spending two seasons as the running backs coach and special team’s coordinator at Cal State Fullerton.

In the spring of 1991, Jackson experienced the professional level for the first time, coaching the running backs, wide receivers and special teams for the World League’s London Monarchs.

Jackson returned to the collegiate level in 1992 where he spent four years (1992–1995) at Arizona State University. He coached the running backs for his first three seasons at ASU and worked with the quarterbacks in his fourth year.

While at USC, Jackson helped guide the Trojans in 2000 to the top of the Pac 10 in total offense. In addition, he was responsible for recruiting two Heisman Trophy-winning quarterbacks to USC – Carson Palmer (2002) and Matt Leinart (2004).

“I want to thank President Gallot for his vison and passion for Grambling State University,” Jackson said. “I am honored to be working with him as with vast submission of this great institution to transcend barriers. I also want to thank Dr. Scott for the countless hours of discussions as we shared for a common desire to position our student-athletes for success and excellence on and off the field.”

The first opportunity in the NFL for Jackson came with the Washington Redskins (now the Washington Football Team). He handled the running back corps for two seasons before being named offensive coordinator in 2003.

In 2004, Jackson began a three-year stretch coaching the wide receivers with the Cincinnati Bengals. Under Jackson’s tutelage, Chad Johnson and T.J. Houshmandzadeh combined for 175 receptions for 2,388 yards in 2005, helping the Bengals secure the AFC North title and a playoff berth for the first time in 15 years. The following year, Johnson (1,369 yards) and Houshmandzadeh (1,081 yards) became the first pair of Bengals to eclipse the 1,000-yard receiving mark in a single season.

Jackson left Cincinnati to become the offensive coordinator with the Atlanta Falcons in 2007 before spending two seasons as the quarterback coach with the Baltimore Ravens.

In 2010, Jackson became the offensive coordinator for the Oakland Raiders. After leading the Raiders to a top five finish in scoring (25.6 points/game), Jackson was named head coach for the 2011 season. Oakland finished the year at 8-8.

Jackson started his second tour with the Bengals in 2012 as a secondary assistant and special teams coach. In 2013, he moved back to the offensive side of the ball, handling the running backs coach. A year later, Jackson was promoted to offensive coordinator.

In 2016, Jackson was hired as the head coach of the Cleveland Browns, where he held the position into the 2018 season. After his time in Cleveland, Jackson returned to Cincinnati as a special assistant to head coach, Marvin Lewis.

Collegiately, Jackson played quarterback at Pacific after transferring from Glendale Community College. During his career at UOP, he amassed over 3,400 yards in total offense and 19 touchdowns in two seasons. Jackson also earned a letter in basketball as a senior.

Jackson earned a degree in Physical Education from the University of Pacific in 1986.