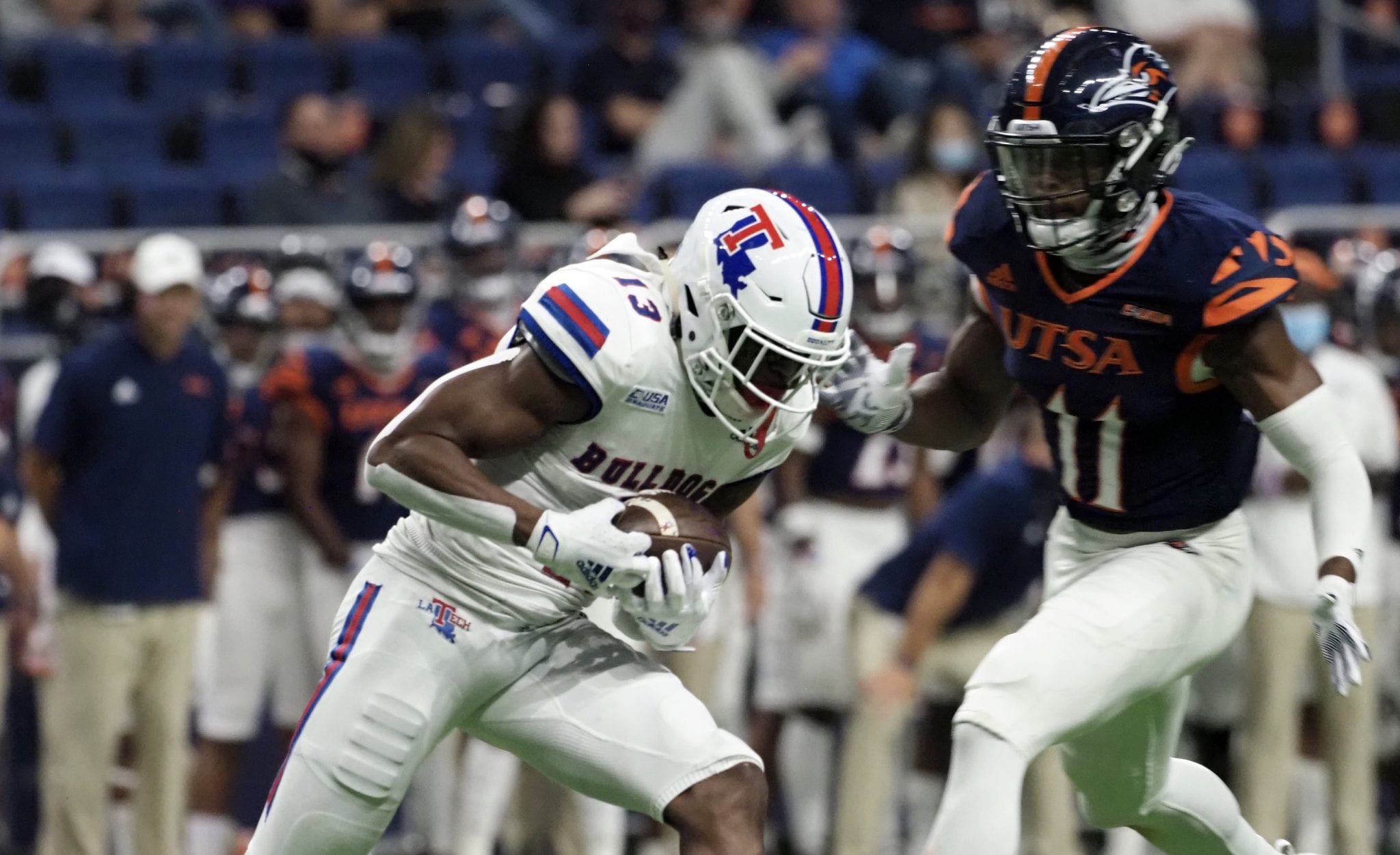 SAN ANTONIO, Texas – Sincere McCormick rushed for 165 yards and three touchdowns to lead UTSA to a 27-26 come-from-behind win over Louisiana Tech Saturday night in Conference USA action at the Alamodome.

LA Tech (3-3, 2-2- C-USA) held McCormick, the nation’s leading rusher, in check over the first two quarters as the Bulldogs took a 19-6 lead into the halftime locker room. McCormick ran for just 30 yards on 12 carries over the opening 30 minutes before finding a groove in the second half.

The Bulldogs managed four Jacob Barnes field goals and a TD reception by Jacob Adams to build the halftime lead, while the Tech defense stood tall – allowing just two first half field goals by the Roadrunners (4-3, 3-2).

“I thought the first half we played a good football game,” said Tech head coach Skip Holtz. “We were able to run the ball, we were efficient. We weren’t very good in the red zone, but I thought offensively we moved the ball and defensively we were playing stout.  It looked really good at halftime.”

The second half proved to be a different ball game. Tech struggled offensively in the third and fourth quarters, totaling just 55 yards on 23 offensive snaps.

“I give UTSA a lot of credit,” said Holtz. “They created more pressure and moved their d-line more to take away the running game. I know we didn’t handle their adjustments very well. We as coaches need to take responsibility. We have to do a better job. We have not handled the pressure very well.”

After UTSA cut the Tech lead to 19-13 following the opening drive on the third quarter, the Tech defense responded. Former Benton stat Ezekiel Barnett intercepted a Frank Harris pass and raced 60 yards to paydirt as the Bulldogs pushed the advantage back out to 26-13.

The fourth quarter proved to be the difference as McCormick and the Roadrunners capitalized on a pair of huge plays. Harris completed a 54-yard pass to Ogle Kellog to set up a 6-yard McCormick TD run that closed the gap to 26-20.

After Tech was unable to move the football and was forced to punt, UTSA took over on its 20 and promptly marched 80 yards on seven plays and took a lead on McCormick’s 45-yard run on a third-and-2  play. The extra point gave the Roadrunners a 27-26 lead with 6:16 to play.

Tech got two more offensive opportunities. But the Bulldogs simply couldn’t move the football as an interception inside a minute to play sealed the win for UTSA.

“We have been really good in the red zone so far this year,” said Holtz  “We ran the ball well in the first half, but there weren’t a lot of big plays in the running game. We did not execute very well as a team in the second half.

“UTSA hung in there and fought, but this game was about us. It was about us executing what we are trying to do. I know we are inexperienced and young at some positions, but at this point in the season we have to be able to execute. We have to do a better job getting the ball into our wide receivers hands.”