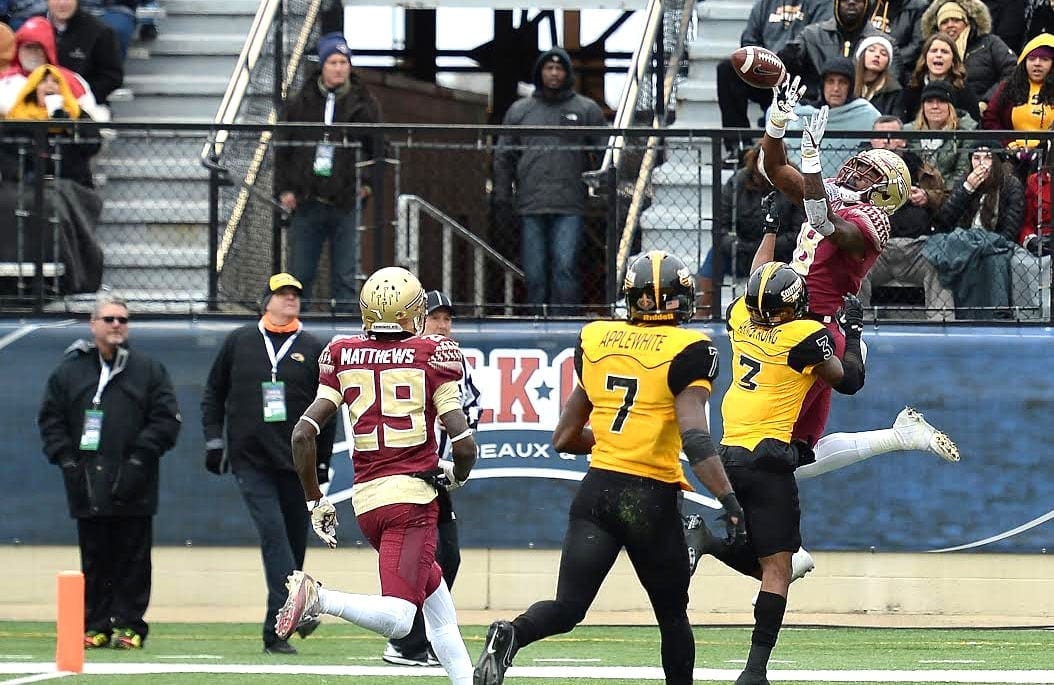 Florida State freshman quarterback James Blackman set a Walk-On’s Independence Bowl record with four touchdown passes as the Seminoles routed Southern Mississippi, 42-13, in the 42nd annual bowl game at Independence Stadium in Shreveport on Dec. 27
Blackman finished the game with 233 yards on 18-of-26 passing and was named the Offensive Most Outstanding Player of the game. His four TD passes was the most for a Seminoles quarterback in a bowl game since Chris Weinke had four against Virginia Tech in the 2000 Sugar Bowl.
Interim head coach Odell Haggins said he was proud of his freshman quarterback’s progression through the season.
“He had to grow up very fast,” Haggins said. “He had to take the diapers off and go to work. Just joking with James, he knows I love him. James, being an 18-year-old kid, coming to Florida State, starting for 12 games, that’s a lot of pressure. These players put their arms around him. Even though James made a few mistakes, they picked him back up. That says a lot about his character. He’s a fighter. He’s a ’Nole.”
Blackman said the bowl season helped quiet the team after former head coach Jimbo Fisher’s departure for Texas A&M.
“It’s been a great month to be honest,” Blackman said. “Even though we’ve been through a lot, we still were able to come together and play as a team. We reacted as a team, and we were with each other and stuck together.

“We did what we had to do to become bowl eligible, and now we won this bowl game. I just want to thank everyone that was put around me from the coaches to the players, and everyone had great energy around me. They helped me lift up this team and helped me be in this position.”
Freshman Cam Akers rushed 13 times for 94 yards and also caught a 14-yard touchdown pass, the first of his career, to lead Florida State with 108 yards of total offense. Akers passed Dalvin Cook for the most rushing yards by a Florida State freshman.
“It’s truly a blessing just to beat able to be in this position,” Akers said. “I have to give credit to my offensive line. I give a lot of credit to the coaches and my teammates for pushing me throughout this season. It’s a great accomplishment and it’s a great blessing. Thank God.”
Florida State junior Auden Tate was on the receiving end of three of Blackman’s touchdown passes, tying an Independence Bowl record for touchdown receptions. He finished the season with 10 TD receptions, the most for a Seminole since Kelvin Benjamin had 15 in 2013.
After the game, Blackman said he sees similarities between the two receivers.
“He reminds me of my big brother Kelvin Benjamin,” Blackman said. “Auden is a great player and a great guy. He’s great to be around, and when he gives me that look, I know what time it is.”
Tate said he saw a lot in his young quarterback all season.
“He didn’t have time to grow as a player or a person – he had to come straight in,” Tate said. “He had to replace one of the best quarterbacks in college. He has leadership qualities that you don’t see in a young guy.”
Southern Miss scored on its first possession of the game on a quarterback keeper from Kwadra Griggs but missed the extra point attempt. The Golden Eagles’ only other score came late in the third quarter on a 13-yard touchdown pass from Griggs to Korey Robertson.
“Give Florida State all the credit,” head coach Jay Hopson said. “They certainly played well. We certainly started out good, but we didn’t get a lot going after that. I thought we had a few chances early in the game and in the second half to get back into the game. We played hard and fought, but give Florida State all the credit. They deserved the win.”
Senior running back Ito Smith finished the game with 92 rushing yards, four catches for 26 yards and four kickoff returns for 72, giving him 190 total yards on the day. He said his teammates are what he will miss most now that his college career is over.
“It hasn’t really sunk in yet,” Smith said. “I am sure it will maybe tomorrow or the next day. What I will really miss is playing with my brothers every Saturday. We worked hard all offseason and I will miss playing with these guys.”
The 29-point margin of victory was the second largest in Independence Bowl history. The largest was Ohio State’s 31-point victory against ULM, 45-14, in 2012. It was the first loss in three Independence Bowl appearances for Southern Miss.
An announced crowd of 33,601 was on hand for the game.