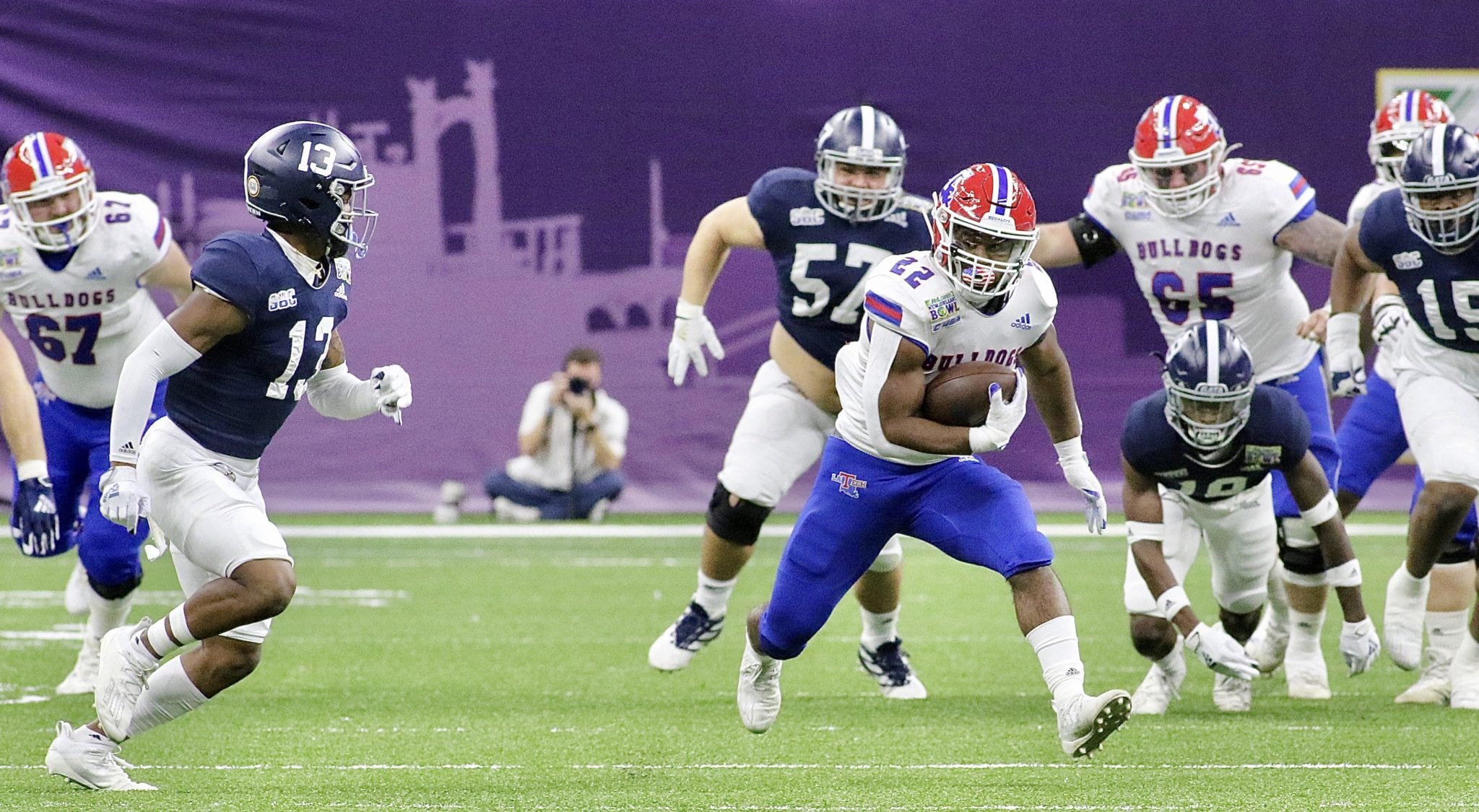 The Bulldogs closed the season with their second straight loss and finished 5-5. Georgia Southern finished 8-5.

“It certainly wasn’t the way that we wanted to finish,” Tech head coach Skip Holtz said. “I was really proud of the way that the team competed. It would have been easy in a lopsided game in the way that it was for guys to throw their arms up or to lay down. I couldn’t be more proud of the way the defense had continued to fight even with very little help from our offense.”

Defensively, the Bulldogs were led by freshman linebacker Tyler Grubbs and redshirt senior linebacker Trey Baldwin with 12 and 11 tackles, respectively.

Two Bulldogs recorded a sack against Georgia Southern as redshirt sophomore defensive back BeeJay Williamson had a sack early in the third quarter and Grubbs registered a sack on a third-and-goal situation at the top of the fourth that would force an Eagles field goal.

Offensively, redshirt senior running back Israel Tucker set the Louisiana Tech bowl record for rushing yards with 123 yards on 20 carries. It marked the second time this season and in his career Tucker registered 100-plus rushing yards in a game.

Turnovers hurt the Bulldogs as Tech threw four interceptions, including three in its first four possessions. Georgia Southern was able to make the most of the turnovers as the Eagles scored on two possessions that followed an interception.

“In a game that you throw four interceptions, you’re not going to win,” Holtz said. “It’s unfortunate that some of the mistakes were made early.”

Georgia Southern opened the game with a 10-play scoring drive as redshirt senior quarterback Shai Werts rushed for a one-yard touchdown to take the early 7-0 lead.

Though the Tech defense forced three-and-outs in the next two Georgia Southern possessions, the Louisiana Tech offense was unable to convert as the Bulldogs threw three interceptions in the opening four drives.

Following one of the interceptions, Werts connected with sophomore wide receiver Khaleb Hood on a 65-yard touchdown pass to take a 14-0 lead early in the second quarter.

The Eagles would extend the lead to 21-0 in the second period after a 37-yard rushing touchdown from Werts.

With less than a minute left in the half, the Eagles punted the ball to redshirt sophomore wide receiver Smoke Harris who returned it for a career-high 60 yards to the Georgia Southern 20 yard line.

Harris’ return was a Louisiana Tech bowl record. Redshirt freshman kicker/punter Jacob Barnes would go on to kick a 45-yard field goal, which was the second longest field goal by a Bulldog in Tech bowl history, to put Louisiana Tech on the board as the Bulldogs trailed, 21-3, heading into the break.

However, the Bulldogs were unable to score again. Georgia Southern would score two more touchdowns and make a field goal to secure the 38-3 victory.

“Overall, they fought until the end,” Holtz said. “I give Georgia Southern an awful lot of credit. It was a hard-fought game on both sides. It’s just a painful way to finish a hard-fought season with everything everybody went through to make a COVID-19 2020 season work.

“You just wish there were no losers because so many people had to overcome so much just to have the opportunity to play the game.”

Freshman quarterback JD Head entered the game in the third quarter and went 9-of-14 for 78 yards and one interception.

“I was really proud of the way JD Head went in there and competed as a true freshman,” Holtz said. “He’s got some energy. He stood in there. He read. He did a really nice job. He had a bunch of drops, but he competed.”