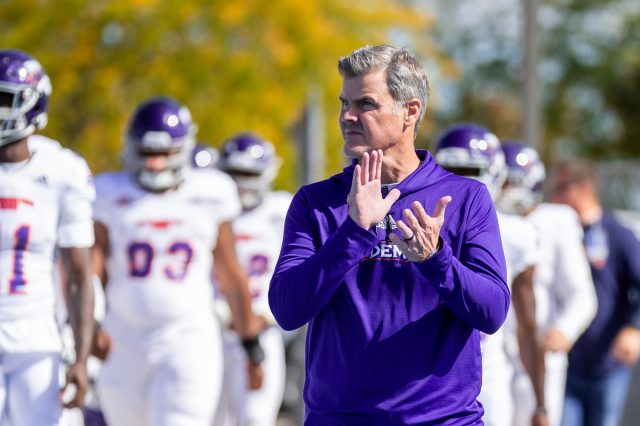 NATCHITOCHES – Brad Laird will return as Northwestern State’s head football coach for the 2023 season, according to an announcement Monday by NSU Director of Athletics Kevin Bostian.

The decision was made following a 2022 season in which Northwestern State produced its best Southland Conference record in more than a decade and went into the final week of the season with a chance to win its first conference title since 2004.

Northwestern State started 4-0 in the Southland Conference for the first time since 1988 and posted its best winning percentage in the league since 2004, going 4-2 in six conference games. The 4-2 mark was NSU’s first above-.500 finish in conference play since 2010.

“The progress our team showed throughout the season reinforced to me the program is headed in the right direction,” Director of Athletics Kevin Bostian said. “After meeting with Brad, I am further convinced he is the right person to maintain the momentum built this season. It is clear Brad connects with his players on a personal level and they fought through a tough start to the season because of the level of respect they have for him.”

The Demons made significant coaching staff changes and welcomed 30 newcomers to the program this offseason although offensive coordinator Cody Crill, hired in January, never coached a game at NSU. Crill stepped away from the program less than two weeks ahead of the Sept. 3 season opener at Montana for family reasons.

Following an 0-3 start, the Demons won four of their next six games, putting themselves alone in first place in the Southland entering the final two games of the season.

“A year ago, based partly on outside circumstances, it was prudent for us to extend Brad Laird’s appointment as Northwestern State’s football coach,” NSU President Dr. Marcus Jones said. “The steps the program has taken during the 2022 season proves we made the right decision. Maintaining continuity at the head of the program is important to build on the culture coach Laird has created.”

Laird, a record-setting quarterback at Northwestern State from 1991 through 1995, held the Demons’ all-time passing record for nearly a quarter century before coaching Shelton Eppler to a record-breaking, two-year campaign in 2018-19.

He served as defensive coordinator at NSU three times for a total of eight years and also was associate head coach for three of those seasons before becoming head coach in 2018.

Laird was inducted in 2015 into Northwestern’s N-Club Hall of fame, the highest athletic honor at the university.