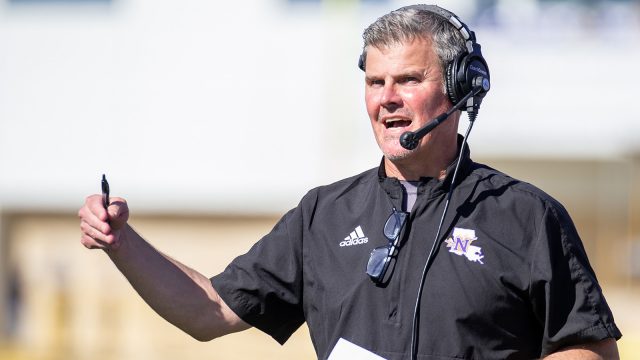 NATCHITOCHES—Brad Laird’s appointment as head football coach at Northwestern State will be extended through the 2022 season according to an announcement Monday by NSU president Dr. Marcus Jones.

Laird has compiled a 12-28 record in guiding the Northwestern football program since 2018.  The Demons were 3-8 overall and 3-5 in the Southland Conference this year while playing three league opponents twice in home and away contests.

NSU won two of its last three games, including a victory last weekend over archrival McNeese in Lake Charles for the first time in 33 years.

Jones said, “Most college football coaches are given at least four years to establish their own programs.  Brad has been the head coach for four seasons, but this has certainly not been a normal four-year period because of the chaos of COVID and other factors.”

Northwestern and many other teams across the nation did not compete in the Fall of 2020 because of the pandemic.  The Demons played an abbreviated, six-game schedule in the Spring of 2021 and returned to competition after a shorter break than usual for the Fall 2021 season.

In addition to COVID distractions, recruiting disruptions, and abnormal practice routines and game schedules for football, the university is also going through a transition in the athletic director position.

Long-time athletic director Greg Burke will be reassigned to a different position at the university at his request, and a national search is underway for his successor.

“The change in athletic administration makes it even more practical to extend Coach Laird’s appointment,” Jones said.  “The new athletic director should have an opportunity to evaluate football and other sports and make decisions on coaches and other personnel going forward.”

Jones said Laird requested and has received approval to make significant changes on his coaching staff.

Laird, a record-setting quarterback at Northwestern from 1991 through 1995, still holds the Demons’ all-time career passing record with 6,037 yards.

He served as defensive coordinator at Northwestern three times for a total of eight years and was also associate head coach for three of those seasons before becoming head coach in 2018.

Laird was inducted in 2015 into Northwestern’s N-Club Hall of Fame, the highest athletic honor at the university.