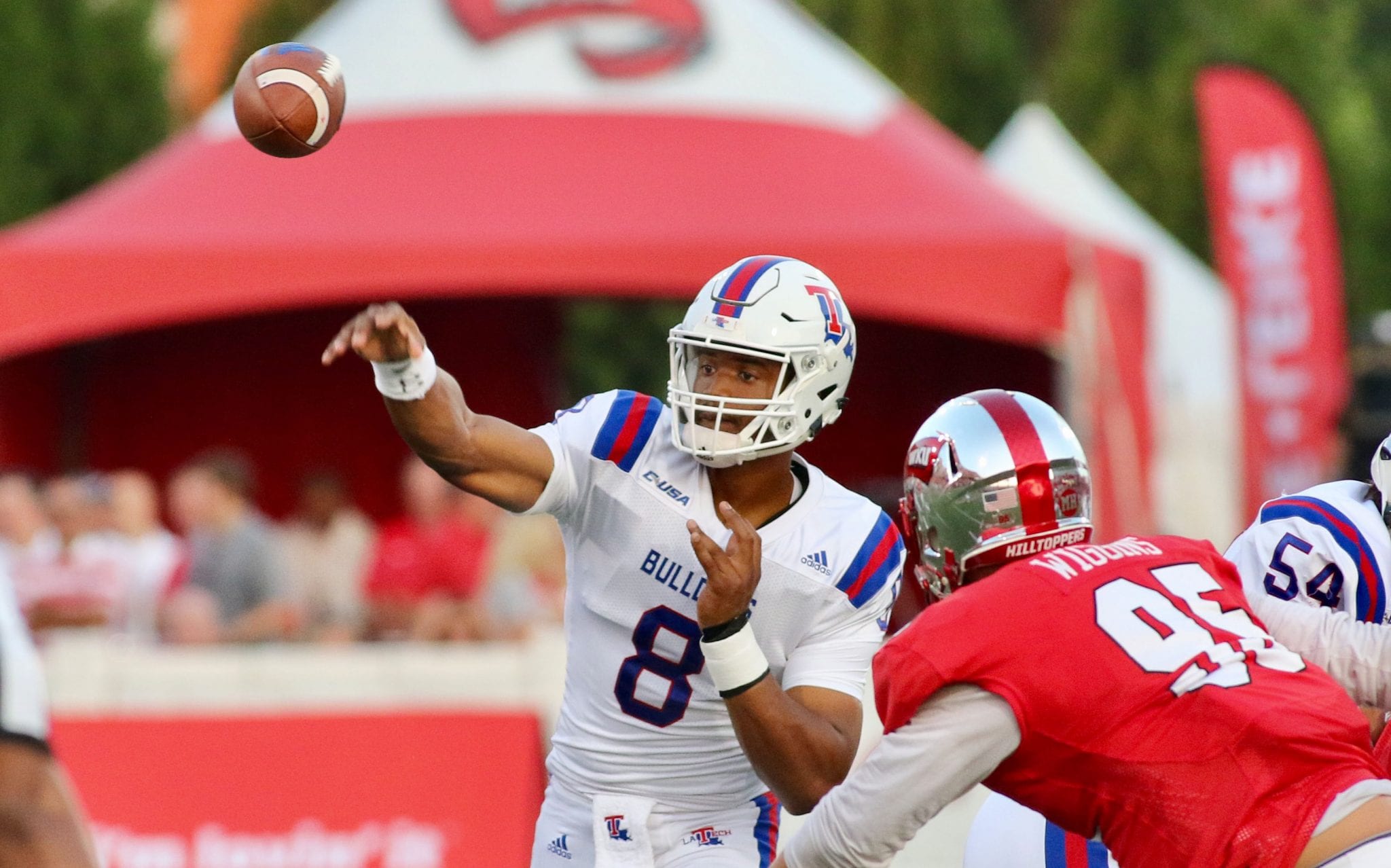 BOWLING GREEN, Ky. — Louisiana Tech and WKU have played some classic games during the past three years and Saturday night at Feix Field was no different.
Trailing 22-13 entering the fourth quarter, the Bulldogs defense stood tall on a numerous four quarter possessions while the LA Tech offense came up with some late big plays of its own.
Sophomore quarterback J’Mar Smith led a pair of late game scoring drives and senior Jonathan Barnes’ 22-yard field goal with two seconds to play giving the Bulldogs (2-1, 1-0 C-USA) a 23-22 win over WKU, snapping the Hilltoppers 13-game home conference win streak before 16,223 fans.
“We talked about it would take 60 minutes,” said Tech head coach Skip Holtz. “This game has been a three point game almost every time. This is the third time we’ve played in 365 days. We felt we had to come up here and find a way to win on the road. It’s hard to do here. This is championship football and we found a way. No one hung their head. We threw the interception with three minutes to go, but we found a way. The defense came up with some big stops.”
LA Tech opened league play on the road for the fourth straight year, the only team in C-USA that has been saddled with that burden, and found a way to pick up a huge road win in a match-up of the two teams that were the preseason picks to win the East and West Divisions. WKU defeated Tech 58-44 in the C-USA Championship Game last season.
Smith passed for 306 yards, but saved his best for last, leading a 91-yard TD drive and the game-winning 58-yard, game-winning field goal drive.
Trailing 22-13, Tech’s defense got a huge stop as linebacker Brandon Durman sacked WKU quarterback Mike White on a third down and seven play, forcing a Hilltoppers punt.
The Bulldogs offense took over on its own 9-yard line with 8:14 to play. Smith then drove the Bulldogs 91-yards on eight plays, including a 38-yard hookup with Rashid Bonnette that put LA Tech on the Hilltoppers 16-yard line. Following a personal foul penalty on a targeting call against WKU linebacker Derik Overstreet moved the ball to the eight, Tech took just three more plays to score as Kam McKnight found paydirt from the 2-yard line. Barnes extra point made the score 22-20 WKU.
Tech’s defense stood tall once again, forcing WKU into another three-and-out. Smith and the Bulldogs offense appeared poised for another scoring drive as Tech drove to midfield. However, it was WKU’s turn to get a big stop as Smith’s deep pass down the right sideline was intercepted by Josh Brown, giving the Toppers the ball with 3:31 to play.
“It’s second and five with three minutes to go and we don’t need a touchdown,” said Holtz. “We were getting close to field goal range. I told him coming off the field to take the 5 yards, then another 5 yards. Let’s work our way down and take high percentage shots. J’Mar felt he could slip it in there. It’s a learning lesson for him. I felt like he grew up a little bit tonight.”
WKU was only one first down away from sealing the win, but the Bulldogs defense came through again. Tech All-American defensive end Jaylon Ferguson sacked White on a third down and seven, once again forcing a WKU and giving the Dogs one last chance.
“Early it seemed like our defense couldn’t get off the field,” said Holtz. “I told Coach (Blake) Baker that it felt like we were playing one of the military schools with the wishbone. They just controlled the ball throwing a lot underneath. Mike White was accurate and they did a good job of protecting him. But we made adjustments and the defense came up huge for us in the fourth quarter with the game on the line. I couldn’t be more proud of them.”
This time Smith and Co. wouldn’t come up short. Back-to-back 18-yard completions to Adrian Hardy and Teddy Veal drove Tech down to the WKU 26-yard line. Jarred Craft then picked up nine yards on the ground and a horse collar penalty on the play against the Hilltoppers took the ball to the eight.
With time running down and WKU down to one timeout, the Bulldogs handed it off twice to Craft up the middle, setting up Barnes final kick for the win.
“We ended up putting the saddle on J’Mar and for a sophomore coming in here, he never flinched,” said Holtz. “He came up big. Last week he learned some great lessons. I thought he did a really good job of taking what the WKU defense gave him tonight.”
WKU led 15-3 early on a pair of TDs before Smith found Bonnette for an 87-yard scoring strike, the ninth longest pass play in Bulldog history. Barnes 36-yard field goal with 21 seconds to play in the second quarter cut the WKU lead to 15-13 at the half.
Tech appeared poised to take the lead late in the third quarter when Smith found Bonnette behind the WKU secondary for an apparent TD, but the sophomore saw this one slip through his hands. Following a Tech punt, White drove the Hilltoppers 78 yards on eight plays as WKU took a 22-13 lead on a 19-yard run by Jakairi Moses.
The much-maligned Bulldog defense made the fourth quarter its own, holding WKU to a total of 18 yards on 15 offensive plays.
Bonnette led Tech with 140 yards on three catches while Veal added 78 yards on a career-high nine receptions. Craft led the Tech ground game with 81 yards on 14 carries.
Scedrick Cooper, Aaron Roberson and Durman led Tech with nine tackles each while Ferguson totaled two of Tech’s four sacks in a game that saw only one total turnovers between the two teams.
The Bulldogs return to action Saturday when they face South Carolina at 2:30 p.m. CT in Columbia, South Carolina.