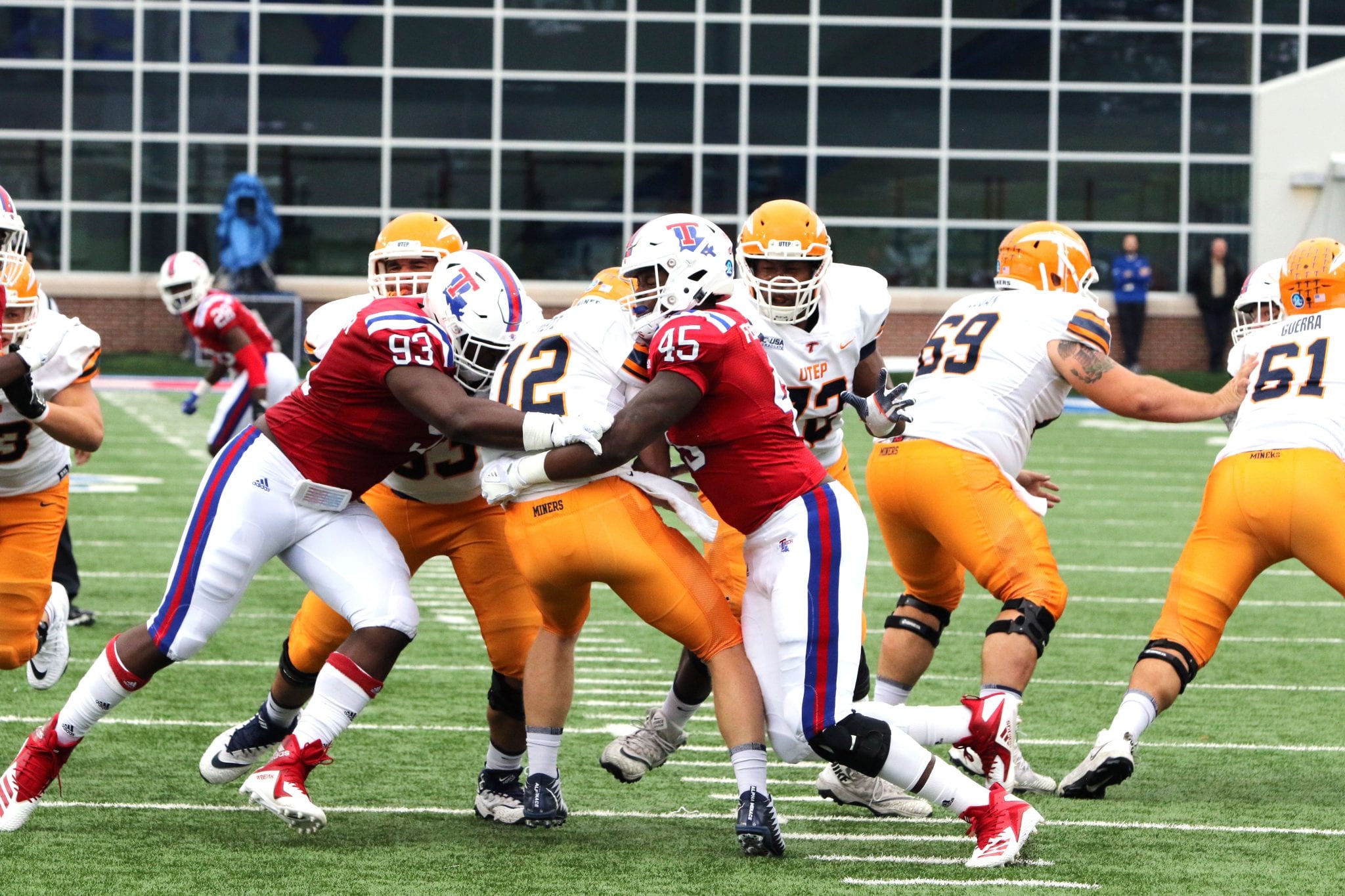 RUSTON — J’Mar Smith scored on a 43-yard run in the fourth quarter and the Louisiana Tech defense came up with a late stop, sending the Bulldogs to a 31-24 homecoming victory over the upset-minded UTEP Miners before 18,972 fans at Joe Aillet Stadium Saturday afternoon.

“It’s always exciting to win especially a game that comes down to pretty much the last play of the game with your opponent on the goal line,” said Tech head coach Skip Holtz. “Great game. Lot of excitement, energy and enthusiasm. Obviously we give a lot of credit to UTEP and the way they came in here and fought and competed. They’re an 0-7 team, but they’ve been playing with a lot of confidence and playing physical and hard. I’m just really impressed with the way they played.”

Tech (5-2, 3-1 C-USA) got another outstanding individual performance by senior All-American candidate Jaylon Ferguson in the win. The St. Francisville, Louisiana, native recorded three and a half sacks on the afternoon, including two with UTEP threatening in the final minute.

“I’m proud that we were able to win it,” said Holtz. “I don’t know that I have enjoyed watching a defensive player play as much as I’ve enjoyed watching Jaylon Ferguson play the game. I cannot even put into words how special that young man is. When you go back to all the reasons why he came back to get his degree, to be the first in his family to graduate, to play with his teammates, because he wants a conference championship.

Tech won despite an offensive performance that saw the Bulldogs convert just 1-of-10 third downs. However, it was a fourth down play with 6:32 to play in the fourth quarter that proved to be the game-winner.

With Tech facing a fourth-down-and-one on the Miner’s 43-yard line, the Bulldogs went with the heavy formation, full-house backfield. Smith faked the handoff, put the ball on his hip, rolled left and raced 43 yards untouched to the endzone. Bailey Hale’s extra point gave Tech a 31-24 lead.

After neither team moved the ball on its next possession, the Miners took over on their own 33-yard line with 1:47 to play following a 39-yard Davan Dyer punt. With third string quarterback Brandon Jones in the game – UTEP starter Ryan Metz went down in the first series of the third quarter while Kai Locksley was already out for the game due to an injury earlier this year – the Miners (0-7, 0-3) drove down to the Tech eight yard line.

Following an incompletion on first down and goal, UTEP offensive lineman Josiah Gray was called for a facemask penalty on second down moving the ball back to the Bulldogs 23-yard line. Jones then got the yardage back on a 15-yard hookup with Warren Redix on second down.

On third down and goal, Jones was sacked for a 12-yard loss back to the Bulldogs 20-yard line, giving him 37 for his career.

“To see him playing the way he is, is something special,” said Holtz. “There wasn’t anybody more tired on that field than Jaylon Ferguson. Somehow he dug deep and he finds a way to go incredibly hard. I just could not be more impressed with him. I’m really proud of that young man. He was fun to watch play today.”

On fourth and goal, Jones pass was high for David Lucero sailing out of the back of the end zone.

Tech took an early lead thanks to another defensive play. With the Miners deep inside their own territory, L’Jarius Sneed picked off a deflected pass from Metz and raced 12-yards to paydirt, giving Tech a 7-0 lead.

UTEP tied the game with 5:55 to play in the first quarter on a 25-yard pass from Metz to Keynan Foster. Tech regained the advantage just over a minute later on an acrobatic reception by Adrian Hardy covering 19 yards. Hardy’s one-handed reception capped a three-play, 75-yard drive and gave Tech a 14-7 lead.

A Hale 19-yard field goal on the final play of the first half gave Tech a 17-7 lead.

UTEP scored on its first possession of the third quarter, driving 65 yards on six plays in 2 minutes and 30 seconds as Jones scored on a six-yard run on his first play from scrimmage following the injury to Metz.

Tech answered with a six-play, 46-yard drive as Kam McKnight plowed through the UTEP defense for a 5-yard run. Hale’s extra point upped the Tech lead to 24-14.

Jones struck again for the Miners late in the third quarter on a one-yard run. Jason Filley’s extra point made the score 24-21. Filley would tie the game early in the fourth quarter on a 36-yard field goal, setting up the final 10 minutes of play.

Jaqwis Dancy paced the Bulldogs ground game with 93 yards on 12 carries while Teddy Veal led the Tech receivers with 11 catches for 103 yards. Smith completed 17-of-29 passes for 156 yards and one touchdown.

The Bulldogs return to action Friday when they travel to Boca Raton, Florida, to face Florida Atlantic in a match-up of East vs. West Divisions.