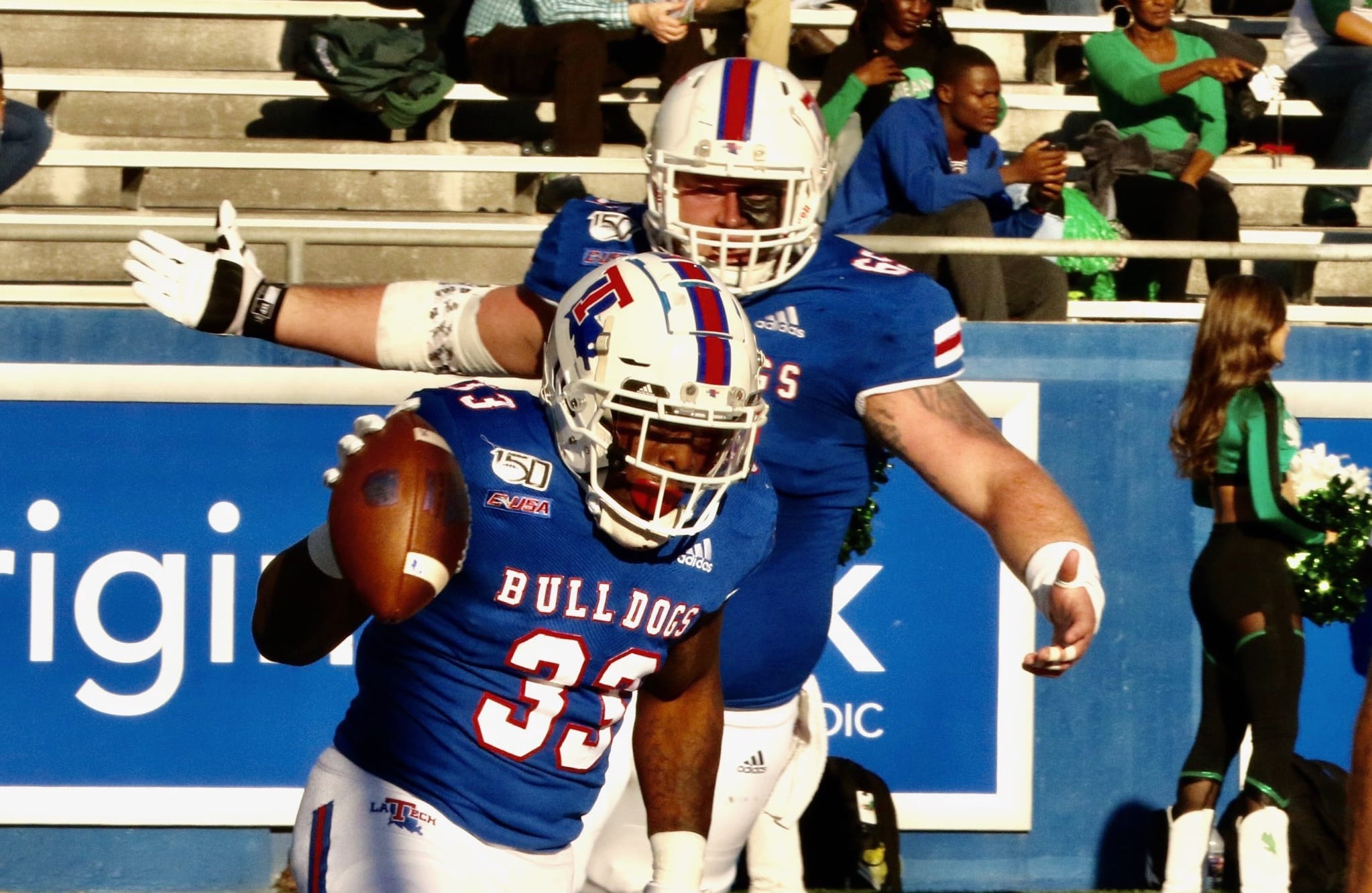 Louisiana Tech (8-1, 5-0) rolled up more than 500 yards of offense and the Bulldog defense stymied a previously high-powered Mean Green offense in a 52-17 homecoming win before 22,792 fans at Joe Aillet Stadium.

“It’s great to win,” said Tech head coach Skip Holtz. “I’m really proud of the focus of the team, their mindset and their 1-0 mentality. It’s really neat to watch this football team come together. To watch them come together emotionally, spiritually and the way that they are playing is great to see.

“The leadership and the buy-in factor has been tremendous. We’ve broken the season into three segments, and this is our final four. This was the first step. I’m so proud of the focus and the energy through some of the lessons we’ve learned this season with ups and downs.”

Justin Henderson added to his league high total with two more touchdowns and led a Bulldog ground attack that amassed 264 yards on the ground. Tech controlled the game on both sides of the ball, totaling 37 first downs and more than 39 minutes of possession in the lopsided victory. The 37 first downs are the most by a Conference USA team in a game this season.

The Bulldogs defense knocked North Texas quarterback Mason Fine out of the game in the second quarter with Tech leading 10-3. A fumble late in the first half by the Mean Green gave Tech an opportunity and the Bulldogs capitalized with a 1-yard TD run by Henderson on the final play of the quarter. Tech led 17-3 at the half.

Even with Fine playing for the majority of the first two quarters, North Texas failed to move the ball against the Bulldogs, totaling just 85 yards on offense on 27 offensive plays in the first 30 minutes of the game.

“This is a team that’s been averaging 37 points per game, and I couldn’t be more proud of the way our defense stepped up and played tonight,” said Holtz. “Earlier in the season, there was some criticism about this group outside, and I think Coach (Bob) Diaco and the rest of the defensive staff have done an incredible job of rallying these guys and getting them to buy into the system.

“That would’ve made it very easy to take a step out and not buy in, and yet these players have believed in these coaches and understanding what they’re being asked to do. You’re watching a group of guys that are playing with an incredible amount of confidence right now. They’re encouraging each other, communicating with each other, and understanding where they’re fitting into the scheme of the defense. I just thought it was a phenomenal group effort on that side of the ball.”

Without Fine, North Texas didn’t fare any better in the second half. With the Mean Green offense unable to pick up first downs, the Bulldog offense had zero trouble.

Israel Tucker scored on an eight-yard run with 5:08 to play in the third and then J’Mar Smith found Isaiah Graham for an 80-yard touchdown four minutes later for a 31-3 lead.

The Graham TD came on the first play following Michael Sam’s interception of Bean in the Tech endzone, snuffing out the Mean Green’s attempt to get back into the game.

Smoke Harris scored on an eight-yard run and Jawaun Johnson added a 15-yard TD in the fourth while the Bulldog defense got into the action with L’Jarius Sneed’s 68-yard interception return for a score. It was Sneed’s third career pick six and the fourth of the year for the Tech defense.

North Texas added two late TDs in the fourth quarter. Austin Aune hit Michael Lawrence for a 74-yard TD, stopping a streak of 45 straight points by the Bulldogs. Tre Siggers scored on a 22-yard scamper for the Mean Green in the final minutes.

Tech totaled 542 yards on 93 offensive plays, a season-high for the Tech offense. North Texas ended the night with 339 yards, but 197 of them coming in the fourth quarter when the game was out of reach.

The Bulldogs were 6-for-6 in the red zone with five TDs and one field goal. Tech has now scored in 30 straight red zone trips this year.

Defensively, Tech has forced 17 turnovers in the last seven games and the Bulldogs have scored on 15 of the 17 (one ended the half and the other was to end the game).

Tech returns to action Friday when the Bulldogs travel to face Marshall at 6 p.m. in a game that will be televised on CBS Sports Network.

“We’ve got 24 hours to celebrate it and then we’ve got to come back for a short week with Marshall this Friday,” said Holtz. “Marshall had an open date, so they’ve got 13 days to prepare for us and we’ll have six to get ready for them. Final exams are this week with the quarter break coming up. We’ve got a lot of things pointing against us. I told them to celebrate responsibly and be ready to buckle it up and come ready to work tomorrow for one heck of a challenge we’re looking at this week.