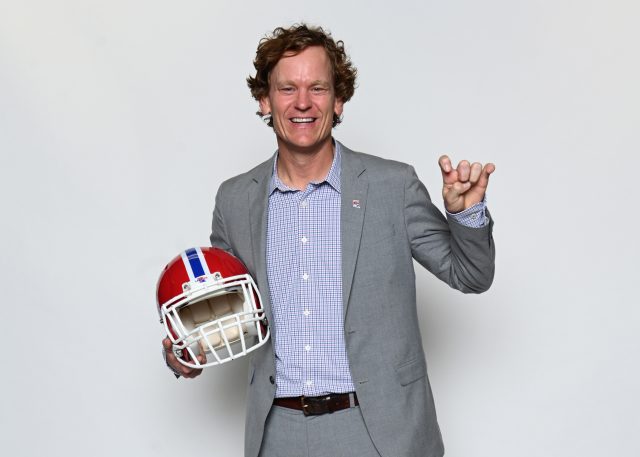 RUSTON – On Wednesday, Louisiana Tech President Les Guice and VP and Director of Athletics Eric Wood introduced one of the most innovative offensive minds in college football as Sonny Cumbie was welcomed to Ruston as the 34th head football coach in Bulldog history.

Cumbie has spent the past 12 years as an assistant coach in the Big 12, including two stints at Texas Tech (2009-13, 2021) and one at TCU (2014-2020). He has served as offensive coordinator the past nine years for the Red Raiders and Horned Frogs and worked under some of the top coaches in college football, including Mike Leach, Tommy Tuberville, Kliff Kingsbury and Gary Patterson.

His offensive philosophy should fit in well with the Bulldog faithful. High-octane football is craved at Joe Aillet Stadium on Saturdays in the fall.

“Sonny Cumbie is the perfect fit for our program, our department, our University, and our community,” said Wood. “Culture. Class. Competitive Excellence. He exemplifies all of these things. As our student-athletes, staff, and fans get an opportunity to know Sonny, they will see what we saw during the interview process.

“I’ve heard so much in the last year about the history of high-scoring offenses and hard-hitting defenses. Our fan base wants an exciting brand of football. They want to win conference titles. They want to continue to build upon the success we have had over the past decade. Sonny will bring all of that to Ruston.”

Cumbie comes to Tech after serving as the offensive coordinator at Texas Tech in 2021, including serving as the interim head coach over the final four games of the season. This was his second stint in Lubbock, after beginning his college coaching career with the Red Raiders in 2009.

He also served as the quarterbacks coach and the offensive coordinator at TCU during his seven seasons in Ft. Worth. And everywhere he has been, his offenses have been innovative and entertaining.

“Sonny Cumbie is a strong young coach who impressed us all with his depth of understanding and focus on the game,” Guice said. “His ability to recruit promising student-athletes and maximize their talents will help us continue to take our football program to a higher level of competitiveness. I look forward to seeing Sonny be the next in line of so many great Louisiana Tech coaches, and I know he and his family will be a great addition to our Tech Family.”

During his tenure at TCU, Cumbie oversaw the Horned Frogs’ quarterbacks and served as the sole offensive play caller each of the final four years. TCU boasted the Big 12’s second-best conference record (38-25) and its third-best overall mark (58-30) over his seven seasons, which coincided with six bowl appearances.

Cumbie helped push TCU to the Big 12 Championship game and a top-10 ranking in his first year as sole play caller in 2017 as the Horned Frogs closed the year at 11-3 overall following a 39-37 victory over No. 13 Stanford in the Valero Alamo Bowl.

“My family and I are extremely excited and honored to be the head coach at Louisiana Tech University,” Cumbie said. “We look forward to many successful seasons in Ruston with an exciting brand of football. I cannot wait to assemble our staff and get to building relationships with our players and the coaches across this great state.”

During his first stint with the Red Raiders, Texas Tech threw for more than 4,000 yards each of the four years while averaging more than 35 points per game.

His 2012 Texas Tech offense boasted a pair of 1,000-yard receivers, making the pair the first teammates to each eclipse 1,000-yard seasons since 2007 when future NFL stars Michael Crabtree and Danny Amendola did so. In 2013, he coached a pair of freshman quarterbacks and still boasted an offense that finished second in the FBS in passing yards per game (392) and eighth in total offense (511).

“I’ve gotten a chance not only to experience first-hand the tremendous coaching ability of Sonny Cumbie, but also to understand how exceptional a person and leader he is,” said Arizona Cardinals Head Coach Kliff Kingsbury. “Coach Cumbie is one of the bright young offensive minds in football. This opportunity is a great one, and I am excited to watch the success he will have at Louisiana Tech. The Bulldogs are getting a good one.”

His passion for high-octane offenses comes from his playing days at Texas Tech.

After walking on for the Red Raiders in 2000, he earned the starting role his senior season and led the country in passing yards (4,742 yards) and total offense (4,575 yards) with 32 touchdowns. Texas Tech went 7-4 in the regular season and earned a berth to face Top 5 Cal in the Holiday Bowl, where the Red Raiders were huge underdogs. Cumbie completed 39 of 60 passes for 520 yards (still a Holiday Bowl record) and three TDs in the win over the Bears.

He spent time playing for the Los Angeles Avengers of the Arena Football League, earning a spot on the AFL All-Rookie Team in 2006 as well as being a finalist for the AFL Rookie of the Year. Upon completion of the 2006 season, Cumbie was signed by the Baltimore Ravens. He was back in the AFL for the 2007 season, leading the Avengers to their first playoff victory in franchise history while throwing for 83 touchdowns.

Following his time in the AFL, he served time as a head coach in the Indoor Football League where he also played some quarterback during the 2009 season. Following the IFL stint, he joined Mike Leach’s staff as a graduate assistant at his alma mater.

Cumbie and his wife, Tamra, are both natives of Snyder, Texas, and graduates of Texas Tech. They are parents to two sons, Grey and Hays.

What Others are Saying About Sonny Cumbie

“I’ve gotten a chance not only to experience first-hand the tremendous coaching ability of Sonny Cumbie, but also to understand how exceptional a person and leader he is. Coach Cumbie is one of the bright young offensive minds in football. This opportunity is a great one, and I am excited to watch the success he will have at Louisiana Tech. The Bulldogs are getting a good one.” – Kliff Kingsbury, Arizona Cardinals Head Coach

“Sonny is one of the up-and-coming coaches in our profession. He showed his potential on how he handled the Texas Tech situation.” – Gary Patterson, former TCU Head Coach

“I am so happy for Coach Cumbie to be named head coach at Louisiana Tech.  I have known for a long time that he was destined to be a successful head coach.  Over the past month, I have witnessed Coach Cumbie lead our football team at Texas Tech and inspire and instill a level of confidence within a locker room that has elevated our team.  His genuine approach builds trust and his passion motivates young men to be their very best.  The Louisiana Tech family has a great man leading their football program.” – Kirby Hocutt, Texas Tech Director of Athletics

“Sonny is a fantastic choice for Louisiana Tech. He will connect with both players and recruits. His energy and optimism will be contagious and create excitement within the football program. Also, he’s a perfect fit in Ruston and will embrace and serve the community. I have no doubt he will be highly successful.” – Sonny Dykes, TCU Head Coach

“Sonny is a rising star. He is well prepared to be a successful head coach. He’s an innovative offensive coach. More importantly, he is a great motivator and he connects with players. Sonny is a relationship builder that will build LA Tech into a championship program.” – Neal Brown, West Virginia Head Coach

“Sonny is a longtime friend of hundreds of coaches in the state of Texas. He is a great coach and a better man. He will go to great lengths to spend time with every coach he is in contact with, no matter the size of the school or the success they have experienced. Every player’s parent will love him coaching their kid.” – Glen West, Assistant Executive Director of the Texas High School Coaches Association