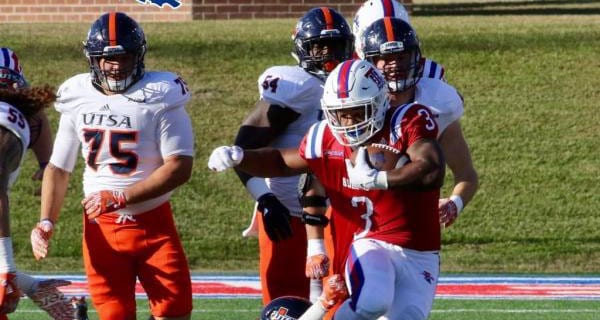 The Louisiana Tech Bulldogs and Navy Midshipmen both ended the regular season on disappointing notes.

The Bulldogs lost their final two games after winning seven straight, including a 58-44 defeat at the hands of Western Kentucky in the Conference USA Championship Game.

The Midshipmen also lost their final two games. Navy fell to Temple 24-10 the American Athletic Conference Championship Game on Dec. 3 and then dropped a 21-17 decision to rival Army on Dec. 10.

While the memories of those losses won’t soon be erased, Louisiana Tech (8-5) and Navy (9-4) will be looking end their seasons on a high note when they face off Friday afternoon at 3:30 in the Lockheed Martin Armed Forces Bowl at Amon G. Carter Stadium in Fort Worth, Texas. The game will be broadcast on ESPN.

Navy is averaging 37.4 points and 436.7 yards per game. With their traditional, run-oriented option attack, the Midshipmen are averaging 310.9 yards rushing per game.

“Any time you play an offense like this, you wish you had a whole other week or two weeks or three weeks,” Louisiana Tech head coach Skip Holtz said in a press conference Thursday in Fort Worth. “But, unfortunately, we play the game tomorrow. So we’ve got to be ready. To me, this game is going to be a great football game on the field. We have two really good football teams that are going to go at it and play really hard and play with class.”

Louisiana Tech, which is averaging 44.0 points per game, likes to put the ball in the air. The Bulldogs are averaging 359.8 yards passing and 156.2 rushing. The passing yardage ranks third in the nation.

Navy suffered a big loss when quarterback Will Worth was injured in the AAC title game. He has rushed for 1,198 yards and 25 touchdowns and passed for 1,397 yards and eight touchdowns.

Sophomore Zach Abey made his first start in the Army game and ran for two touchdowns. Jamar Tillman leads the receivers with 38 catches for 615 yards.

Holtz said a big concern of his the the play-action pass.

“I think everything starts on any offense with the quarterback,” he said. “And Ryan Higgins is as good as I have seen on tape. Gets the ball out of his hands quickly. They do so many things that present issues for you and they stretch you vertically and horizontally.

“When you play in a bowl game, you have got everybody’s tapes. You see the whole year and see what different people have tried to do and everybody has tried everything. Blitz, play coverage, drop 8, bring the house, play zero. I mean, it just — they got answers for everything.

“So it’s going to be a tough matchup for us because they get the ball in space to guys like Trent. And they’re hard to get down. And you kind of look ‑‑ throw a bubble screen. And you think you have played it great. And, man, that was a nice fit up on the perimeter pretty good. You look up, and it’s second and 2. They gained eight yards. And looked defensively like they did things well.”