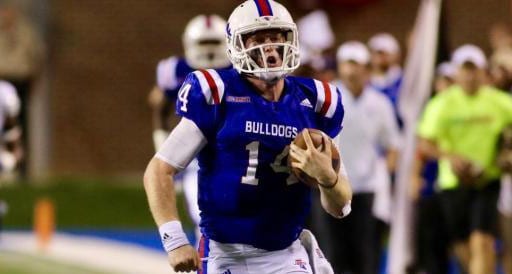 RUSTON — On a night that saw senior Trent Taylor become Louisiana Tech’s all-time receptions holder, his Bulldog teammates made sure it wasn’t a one-man show.

Taylor and Co. amassed more than 700 yards of offense, scored touchdowns on five of their first six possessions and defensively dominated an out-manned Rice team to a tune of 61-16 before 22,058 fans at Joe Aillet Stadium Saturday night.

With the victory, Tech won its fifth straight game and improved to 6-3 on the season, 4-1 in Conference USA play, while becoming bowl eligible for the third straight year and the fifth time in the last six seasons.

“Yeah, I mean, everybody talked about how in the world are you going to replace a Jeff Driskel, a Kenneth Dixon; seven players off that team from last year made an NFL roster or practice squad, five on an active roster and two in the practice squad,” said Tech head coach Skip Holtz.

“I think it’s a real testament to these coaches, the way that they have recruited, the way they are working it to these players to their development to Kurt Hester. We came here four years ago, we talked about building a program, and it wasn’t going to be predicated on just a couple players or having success in one year, but we wanted to be able to do it year-in and year-out. You said so much in just bowl eligibility, you know what I mean. That’s huge right now, being the first team in the history of the school to do three bowls is a row, pretty special feat by these young men. I’m really proud of what they have been able to do.”

Quarterback Ryan Higgins was 18-for-25 passing for 292 yards and two touchdowns in the first half alone, while also rushing for 106 yards and a touchdown on the ground, which marks the first time a Louisiana Tech quarterback has ever rushed for over 100 yards in a single game. His 71-yard TD run late in the first quarter gave Tech a 28-0 lead.

Taylor hauled in seven catches for 131 yards on his way to capturing the school record for career receptions, which was previously held by Troy Edwards. He set the record in the first quarter with his fourth reception of the game – his 281st of his career – on a 71-yard pass play that saw Taylor break numerous tackles and drag Rice defenders the final 10 yards.

As a team, Tech totaled 735 yards of total offense, the third most in a single game in program history.

“Yeah, you know really, doing some good things,” said Holtz. “I think Todd Fitch has done a really good job. We talked about the comfort level with him and how much we’ve been together and for the history that we have been together in this game; but I think he comes in, we understand each other; we talk to each other. He’s a phenomenal set of eyes in the box. He’s got a great mind.

“I think the staff has done a great job. Tim Rattay and Joe Sloan have been here through the whole thing. Robert McFarland with the offensive line and Mickey Joseph has done a really nice job with the running backs.

“I think those guys on offense have done a nice job. We talked about, we wanted to have balance, and this is a different offense than Ryan 5spearheaded four years ago. There are different weapons around him and certainly he’s got a much better understanding of what we’re trying to get done. It’s fun to watch it when it’s hitting on all cylinders like it was tonight.”

Defensively, the Bulldogs held Rice in check all night long. Tech allowed only 23 total yards of offense on the Owls first five possessions of the game. By the time the Owls earned their second first down of the game, the Bulldogs led 35-0 and the game was already decided.

Tech also recorded five sacks on the night for minus 31 yards and held Rice to 6-of-15 on third down conversions.

LA Tech kept its streak of scoring on the opening drive of every game this season alive Saturday when Ryan Higgins’ 26-yard pass was tipped and fell into the hands of Carlos Henderson for his 11th touchdown reception of the season to put the Bulldogs up, 7-0, over Rice with 11:23 left in the first quarter.

It only took Taylor about seven minutes into the game to make history as the senior wide receiver broke the Louisiana Tech school record with his 281st career reception, a 71-yard gain midway through the first quarter. Three plays later, Boston Scott ran it in from three yards out for his third rushing touchdown of the season to put LA Tech ahead, 14-0, over Rice.

With more than four minutes remaining in the first quarter, LA Tech added to its lead and jumped out to a 21-point lead thanks to Jarred Craft’s 1-yard rushing touchdown that capped off a 70-yard drive.

Higgins showed off some speed late in the first quarter when the senior quarterback kept it himself and out-ran the Owls for a 71-yard rushing touchdown to put the Bulldogs ahead, 28-0, over Rice before the end of the first quarter.

Early in the second quarter, the Bulldog defense came through with the big play when Dalton Santos forced and recovered a Rice fumble at the Owls’ 23-yard line. From there, a 16-yard rush by Henderson set up Kam McKnight’s 7-yard touchdown reception to put LA Tech up, 35-0.

Jonathan Barnes made his mark on the stat sheet in the first half by connecting on 43- and 32-yard field goals to give the Bulldogs a 41-0 lead over Rice at halftime.

In the first half, LA Tech out-gained the Owls with 451 total yards compared to Rice’s 108 yards through two quarters of play.

With a 41-point lead heading into the second half, some fresh faces saw action in the third quarter as J’Mar Smith led the Bulldogs on a 75-yard scoring drive that ended with Boston Scott’s second rushing touchdown of the game, a 6-yard score to put LA Tech ahead, 47-2, over Rice after a blocked point-after attempt resulted in two points for the Owls.

DeJuawn Oliver notched the second touchdown of his career in fashion soon after that when Smith connected with him for an 89-yard touchdown to give LA Tech a 54-2 lead over the Owls. It was the sixth longest pass play in LA Tech history and helped Smith finished the night 6-of-6 for 142 yards and one touchdown.

Boston Scott added his third touchdown of the game at the beginning of the fourth quarter when he broke off for a 70-yard rushing score to extend LA Tech’s lead to 61-9 over Rice. Scott rushed for a career-high 137 yards and three scores on just 15 carries.

The Owls would score a late touchdown for the final margin.

The Bulldogs hit the road next week to take on North Texas in Conference USA play at 4:30 p.m. Saturday, Nov. 5 in Denton, Texas.