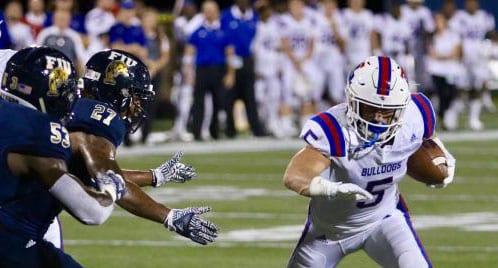 FIU cut the lead to 10 points in the third quarter, but LA Tech outscored the Panthers 17-7 from that point on and put the icing on the cake with Carlos Henderson’s 92-yard kick returned for a touchdown late in the fourth quarter.

Ryan Higgins kept the ball out of danger with a 22-for-30 passing performance for 269 yards and three total touchdowns, including one rushing score.

Trent Taylor led the offensive attack with 11 catches for 156 yards and a touchdown, while he became just the fourth player in Louisiana Tech history to register 1,000 yards in consecutive seasons.

FIU got on the board first when a 24-yard field goal gave the Panthers a 3-0 lead over LA Tech with 8:31 still remaining in the first quarter, but LA Tech countered on its opening offensive drive with a 42-yard field goal by Jonathan Barnes after Carlos Henderson’s 50-yard kickoff return gave the Bulldogs good field position.

Higgins gave the Bulldogs a 10-3 lead later in the first quarter after capping off a 59-yard drive with a six-yard rushing touchdown to give LA Tech a seven-point lead over FIU.

The Bulldogs extended their lead to 17-3 over FIU to start the second quarter of play when Kam McKnight barreled into the end zone from the four-yard line for his sixth rushing touchdown of the season.

Barnes connected on a 31-yard field with four minutes remaining in the first half to make it a 20-3 lead, which was cut short by FIU’s last offensive drive of the half that ended with a 17-yard touchdown pass from Alex McGough to Jonnu Smith to make it a 10-point game.

With under a minute remaining in the first half, LA Tech responded quickly by driving 67 yards in 40 seconds before Higgins connected with Trent Taylor for a 26-yard touchdown to give the Bulldogs a 27-10 advantage at the halfway mark.

FIU cut the lead to 10 once again on its first offensive drive of the second half thanks to a 30-yard touchdown pass from McGough to Thomas Owens to makes it a 27-17 lead for LA Tech.

With FIU driving midway through the third quarter, Xavier Woods recorded his 13th career interception and returned it 45 yards to the 2-yard line to set up Higgins’ 1-yard touchdown pass to Kam McKnight to give LA Tech a 34-17 lead with under four minutes to go in the third.

Early in the fourth quarter, Barnes tacked on a 23-yard field goal to extend LA Tech’s lead to 20 points and make it a 37-17 advantage for the Bulldogs over the Panthers.

The Bulldogs now return home to play hosts to the Rice Owls Saturday, Oct. 29 at 6 p.m. in Conference USA play at Joe Aillet Stadium in Ruston.