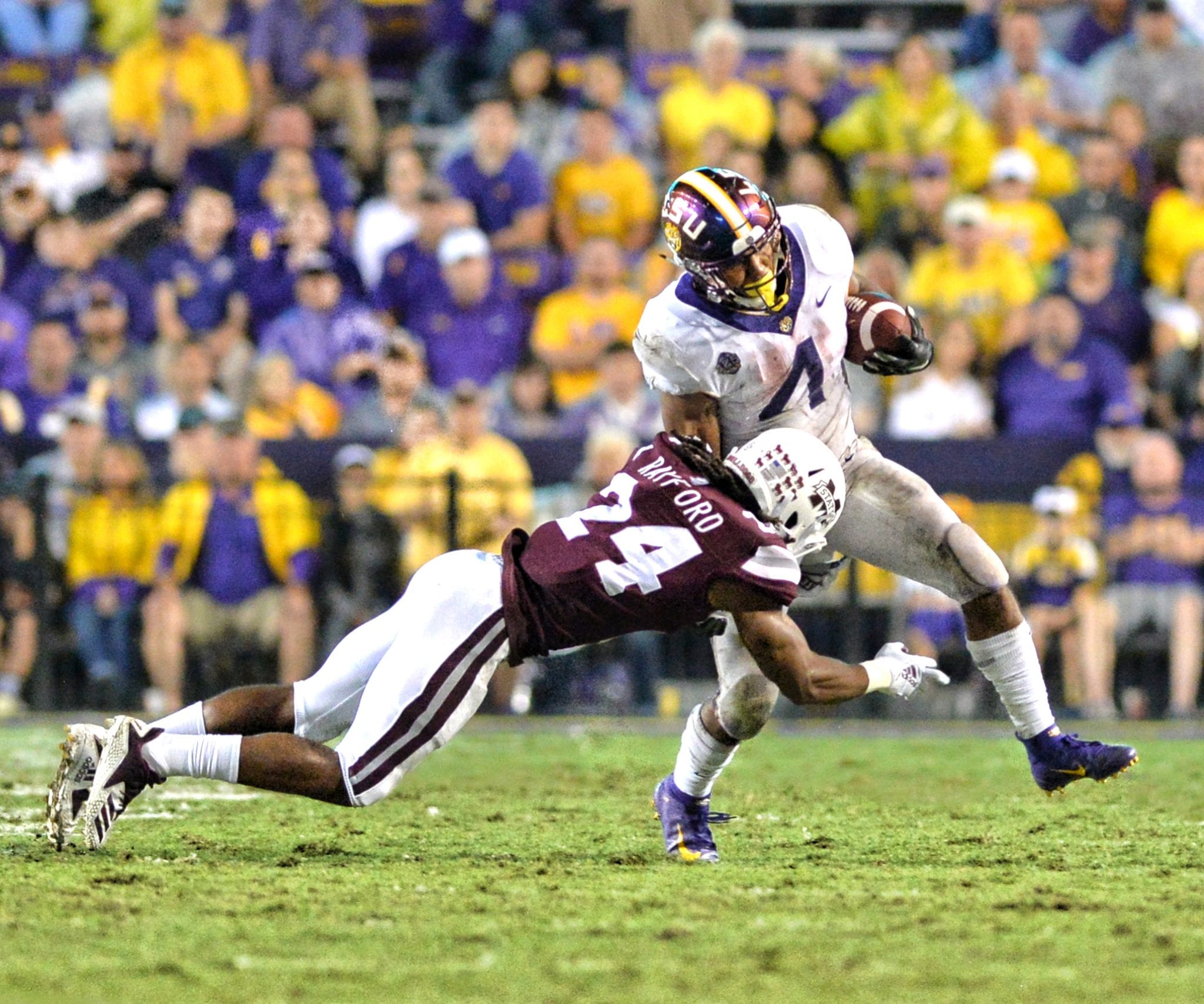 BATON ROUGE — No. 5 LSU contained 22nd-ranked Mississippi State, relied on its stellar defense and the right foot of placekicker Cole Tracy to earn a 19-3 victory on a wet Saturday night in Tiger Stadium.

“Good win for our football team,” LSU coach Ed Orgeron said. “That was a good football team we played tonight. I thought our defense played lights out. Great job by (defensive coordinator) Dave Aranda and our staff. (MSU quarterback) Nick Fitzgerald is an excellent football player. This team is a good team we beat today.

“Obviously, we struggled on offense a little bit. We came back in the second half and moved the football. Plus-three in the turnover margin really helped us. Field goals obviously really helped us. This was a tough week after the big win against Georgia, an emotional win, we knew Mississippi State was going to be up and ready to go. The crowd was really into it tonight and helped us, especially in the first quarter. Now we get to get some rest.”

Overshadowing the Tigers’ fourth victory over ranked opponents in 2018 was a fourth-quarter targeting call on junior linebacker Devin White following a hit on Fitzgerald. White’s penalty was confirmed by video review, he was ejected from the game and will miss the first half of the Tigers’ next contest against No. 1 Alabama.

“I’ve got to look it,” Orgeron said of the targeting call. “The call was the call. They reviewed and said it was definitely targeting. I didn’t see anything that would suggest either way.

LSU will play host to the Crimson Tide on Nov. 3 at a time to be announced by the SEC and its network television partners on Monday, Oct. 22.

White, safety Grant Delpit and linebacker Jacob Phillips each had 10 tackles against Fitzgerald and the run-heavy Bulldogs. Delpit had two of LSU’s four interceptions along with a the Tigers’ only sack.

LSU runnin back Nick Brossette eclipsed 1,000 career yards and finished with 57 on 17 carries and the game’s only touchdown. Quarterback Joe Burrow was 16-of-28 passing for 129 yards with an interception. Eight different receivers had catches for the Tigers, and Dee Anderson led the way with three receptions for 29 yards.

Placekicker Cole Tracy continued to move up the LSU record book, becoming the first Tiger to kick nine field goals in a two-game span. Tracy made all four of his attempts – 25, 38, 29 and 40 yards – and now had 21 field goals in 2018.

Fitzgerald finished with 131 rushing yards, but only had 79 on 20 carries after ripping off 53 on conseutive runs on the Bulldogs’ second drive of the game. He was 8-of-24 passing for 59 yards, 40 of which came on his final drive of the night. Running back Kylin Hill added 42 yards for the Bulldogs.

LSU wore a unique uniform for the contest, a tribute to the 1918 “Silent Season” which was canceled due to World War I.

Statement from SEC Office on targeting call on LSU player Devin White in response to request for comment from media in Baton Rouge:

By rule, no player shall target and make forcible contact to the head or neck area of a defenseless opponent. The QB on the play was defenseless at the time of the contact. By rule, all targeting calls are reviewed. The call was reviewed and confirmed.