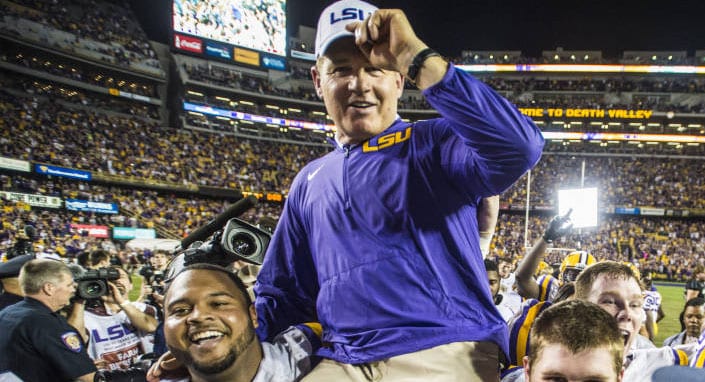 As the clock expired and fireworks were fired from the south end zone, LSU head coach Les Miles was carried from midfield by Christian LaCouture and Vadal Alexander to the northwest corner of the stadium where the Golden Band from Tigerland played the LSU Alma Mater.

After the game, LSU athletic director Joe Alleva announced that Miles would be remaining as LSU’s head coach. There was much speculation about Miles’ job status in the weeks leading up to the game.

“I want to make it clear that Les Miles is our football coach and will continue to be our football coach,” LSU Vice Chancellor and Director of Athletics Joe Alleva said in a postseason press conference prior to Miles’ media briefing.

Fournette ran 32 times for 159 yards and a touchdown that put the game out of reach against the Aggies, passing Charles Alexander’s 1977 rushing total of 1,686. Both played 11 games in the regular season.

With a bowl game to be included in his season tally – unlike Alexander, whose bowl stats did not count toward NCAA totals at that time – Fournette has rushed for 1,741 yards on 271 carries in his sophomore season. The SEC record for single-season rushing yards was set in 1981 by Herschel Walker of Georgia (1,891).

“I just want to thank God, and all my O-Line,” Fournette said. “Each and every day at practice they’re giving it 100 percent—with me and for me. I appreciate them.”

Trent Domingue hit field goals of 32 and 38 yards to put LSU ahead before the Aggies scored its only touchdown to lead 7-6 in the first quarter.

Freshman running back Derrius Guice put LSU ahead for good, 13-7, with a 50-yard end-around for a touchdown midway through the third quarter. Fournette’s 4-yard touchdown run with 2:50 remaining gave LSU it’s final margin.

Guice finished with 73 yards on 10 carries.

The Tigers defense carried its offense throughout the game, holding Texas A&M to 250 total yards with four sacks, an interception and two fumble recoveries.

LSU quarterback Brandon Harris, a former Parkway standout, had a rough night, completing just seven of 21 passes for 83 yards with one interception.

LSU (8-3, 5-3 SEC) awaits its postseason bowl destination, which will be announced on Sunday, Dec. 6.

Here is Alleva’s statement after the game regarding Miles.

“Obviously there has been quite a bit of speculation these past few days about the future of our football coach and our football program. I made it very clear that my policy is to wait until the end of the season. Obviously it is the end of the regular season right now. The season is complete, and I want to make it very clear and positive that Les Miles is our football coach and he will continue to be our football coach. I am looking forward to working with Coach Miles as he leads
this team to a bowl game and another great recruiting class. Les and I have talked. We have talked about this program, and we are committed together to work and compete at the highest level. I frankly don’t have much more to say than that. I am very pleased with tonight’s outcome, and I am very pleased Coach Miles is our coach. We will go forward together and win
championships here at LSU.”

Here is Miles’ opening statement at his postgame press conference.

“I have to be very honest with you. My family knows this. I am very motivated by my team and my family. I had very little trouble putting the distraction that was the perimeter away. I have no problem doing that because of my family and frankly the people I work with in our building. I control their schedule and thought process. We just forged ahead. King F. Alexander made a comment to me. He said, ‘I really wanted that for the seniors.’ I wanted it for the seniors too. It’s
the right thing. We are a pretty talented football team. We seemed to undershoot our mark this year. I agree with Joe. This is a team that should be playing for championships. This is something Joe wants to work towards fully. I am right with him. It’s not enough to win occasionally. You have to win all the time, and I get that. The reason I came here is because the expectations are so high. I just love going into that stadium with 103,000 people that, in fact, believe you should kick
someone’s behind. Frankly, that’s what we think too.
The game itself was an imperfect fistfight. The guy who delivered our body blows was Leonard Fournette. Sometime, maybe Monday or Tuesday, I brought to the office the want to see where Leonard Fournette was in his single season rushing measure. I wanted to see how he measured up to the other great backs that were LSU’s single-season rushing leaders. We found that he was around 108 yards away. That’s why I first presented it to Leonard because he is a team guy. He would never want to supersede a team goal.
The team goal is to win the game. I presented it exactly that way to Leonard. I also said to him as a sidepiece, our football team wants you to win this. We want you to have that record because of how you play, who you have been and how selfless you are as a teammate here. We want this for you. He said, ‘well ok.’ I took it up with the unity council and the team once. I think that is a nice piece to have. A group of men turn and selflessly say, ‘ok Leonard let’s see if we can get this done.’ He ran hard. I don’t know if he ran harder tonight than any other time.
Derrius Guice had a big play. He went down the sideline and made a great kick return. We were imperfect offensively. We weren’t as good as we should have been. We could have scored power points, and those are the things we have to fix. It was a nice night. Victory is always enjoyed, especially when it comes a couple weeks late. It’s nice to be the head coach of LSU. I am proud to be associated with a great institution, my colleagues, my coaches, my players and the president and athletic director. It’s a joy. It’s nice for them to come say to me, ‘hey the job you’ve been doing, you can still do it.’ I like that.”