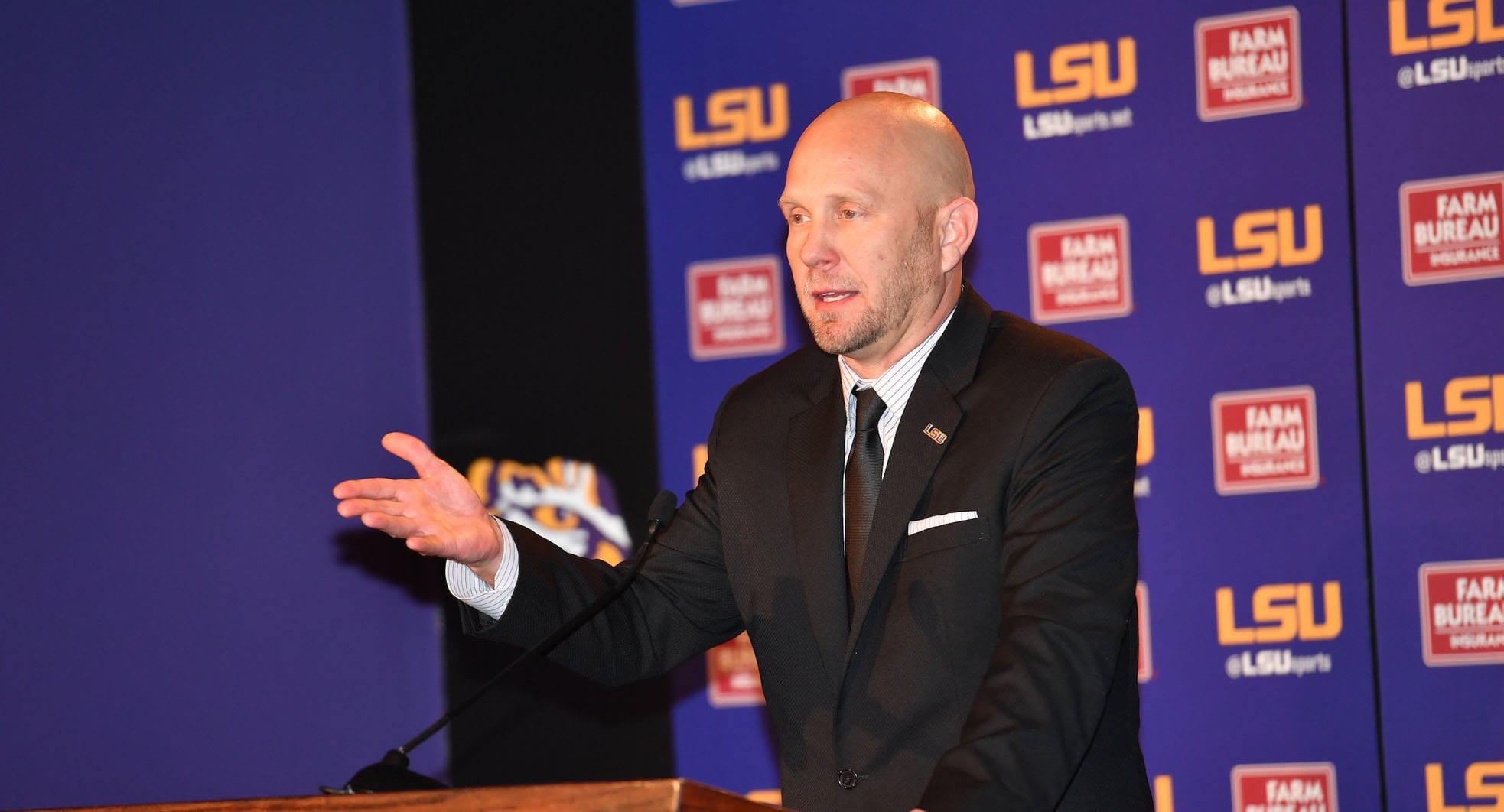 BATON ROUGE — LSU head football coach Ed Orgeron today announced the hiring of Matt Canada as the new offensive coordinator and quarterbacks coach for the Tigers, another step in the process Orgeron and vice chancellor and director of athletics Joe Alleva have stated is crucial to their plans for the program.

“When I first sat down with Joe Alleva and we mapped out a plan for LSU football, we agreed that we were going to demand excellence on both sides of the ball,” said Orgeron. “We want a defense that’s impenetrable and an offense that’s exciting and unstoppable. Anyone who wants to play football at the highest levels is going to want to play at LSU.”

Canada, who was the only offensive finalist for the Broyles Award this year as the nation’s top assistant coach, joins the LSU staff after spending the 2016 season at Pittsburgh, where as offensive coordinator and quarterback coach, he guided a Panther offense that ranked No. 10 in the nation in scoring (42.3) and averaged 447.5 total yards per game. The Panthers also led the nation in redzone touchdown percentage at 82 percent.

“We have a real opportunity under Coach Orgeron to propel LSU football to another level,” Canada said. “The chance to put together a high-powered offense with the athletic ability available at LSU and the leadership of Coach ‘O’ is incredibly exciting. I’ve long-respected Coach Orgeron’s ability to recruit, lead and motivate. What he did as head coach at LSU under difficult circumstances was really impressive. I’m thrilled to be a part of the vision for the program.”

Orgeron and Alleva have spoken openly and at length about their plan and process for making LSU football a championship-caliber program year after year. Alleva said the two looked far and wide at candidates for the job. Both say the search led them to Canada, who fits their plans exactly.

Alleva and Orgeron said the decision wasn’t only about bringing serious firepower to the LSU offense and reiterated their goal is excellence in all things related to student athletes.

“We want coaches who will represent this program with integrity, who recognize that character is as important as wins,” said Alleva. “We want coaches who pay attention to every detail and hold these young student-athletes accountable, on and off the field.”

“Coach O and Joe have been very clear about what they expect,” said Canada. “With the talent already here and what we will recruit, we can put together one of the best offenses in the country. We’re going to develop quarterbacks, score points and bring some excitement to the offense here at LSU. And of course, we’re going to do it the right way – the LSU way.”

At Pitt, Canada’s 2016 offense scored 76 points in a win over Syracuse to cap the regular season and the Panthers also beat Big 10 champion Penn State, 42-39, and topped second-ranked Clemson, 43-42. Pitt is the only Power 5 team in the nation to score at least 28 points in every game this year.

The Panthers recorded an 8-4 mark in 2016 and will play in the Pinstripe Bowl on Dec. 28 against Northwestern in Yankee Stadium.

While at North Carolina State, Canada helped develop quarterback Jacoby Brissett into a third round NFL Draft pick and helped the Wolfpack to back-to-back bowl games in 2014 and 2015. In 2015, the NC State finished third in the ACC in scoring with 33.5 points a game.

Prior to joining the NC State staff, Canada served an integral role in leading Wisconsin to the 2012 Big Ten championship and earning a trip to the Rose Bowl. The Badgers won the conference championship by defeating Nebraska 70-31 at Lucas Oil Stadium in Indianapolis.

At Northern Illinois, Canada helped lead the Huskies to the 2011 MAC title and a berth in the GoDaddy.com Bowl. Starting quarterback Chandler Harnish earned Mid-America Conference MVP honors and was picked in the seventh round of the NFL Draft.

Canada is from New Palestine, Indiana. He has one daughter, Tori, and a son, Chris.

Canada’s deal is pending approval from the LSU Board of Supervisors.