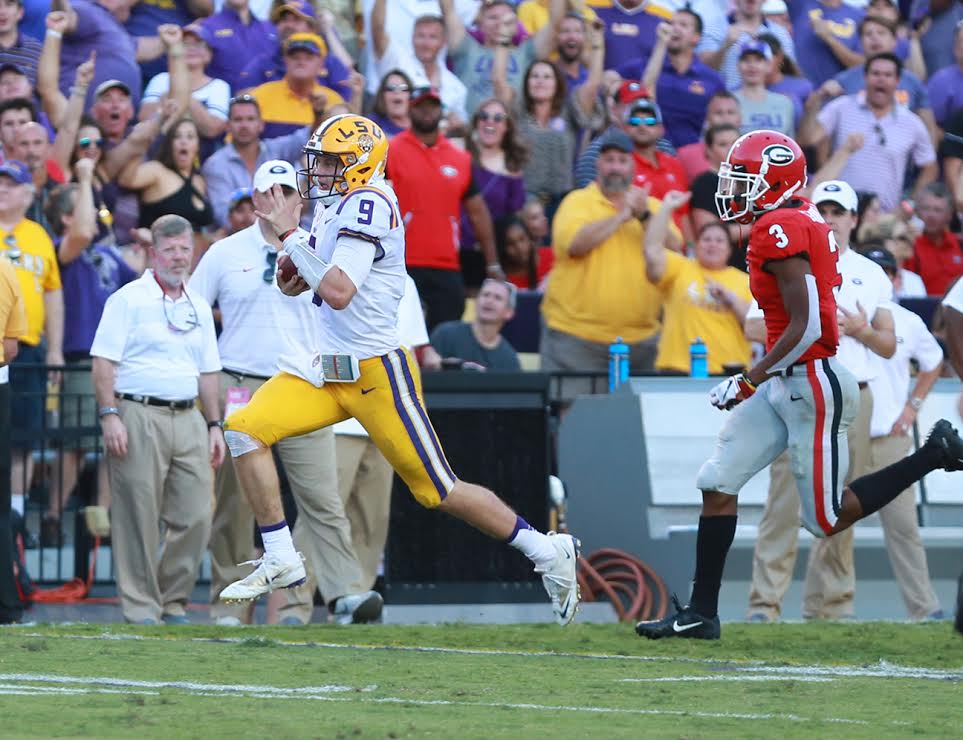 BATON ROUGE — Georgia walked into a raucous cage Tiger fans call Death Valley on Saturday afternoon wearing its SEC title belt, undefeated and ranked second in the nation. The 2017 national runners-up left with a their first loss, an emphatic 36-16 beat down by an inspired LSU football team.

In front of a sold-out Tiger Stadium which overflowed onto the field following the final whistle, LSU (6-1, 3-1 SEC) recorded its third AP Top-2 victory in stadium history – 1997 versus No. 1 Florida and 1961 versus No. 2 Ole Miss.

“Tremendous win for our football team,” LSU head coach Ed Orgeron said. “This was a total team effort. Credit our football staff starting Monday. Credit the players. They were not happy with the results of the Florida game. Obviously, they used it as a motivation all week. Great crowd. Great LSU football. Just the way it’s supposed to be.”

After suffering its first loss on the road to then-No. 22 Florida last Saturday, LSU whipped Georgia to the tune of 475 yards – 275 on the ground and 200 through the air. The Tigers were plus-four in turnover margin, converted 4-of-4 fourth downs (for the first time since 2007 game vs. Florida) and possessed the ball for nearly 34 minutes.

“That was the message we were going to send,” Orgeron said of going for it on fourth down. “We’re going to be as aggressive as we can, take shots, go for it, play to win the game the whole time.”

LSU quarterback Joe Burrow finished 15-of-30 passing and added 66 rushing yards on 13 attempts, including a 59-yarder to the Georgia 4 when the Tigers were attempting to run out the clock on the statement victory.

“Fourth-and-1 is all mindset,” he said. “You can’t block it right every time, because they’ll usually have an extra guy in the box. But if you have the right mindset, you’ll go get that yard.”

Sophomore running back Clyde Edwards-Helaire had 145 rushing yards on 19 carries, while senior Nick Brossette had 64 yards on 16 carries including a 4-yard touchdown run that capped off Burrow’s long scamper. Wide receiver Justin Jefferson had a career-high 108 receiving yards on six catches.

Freshman receiver Terrace Marshall Jr., a former Parkway star, had catches of 37 and 6 yards on LSU’s first drive that ended with a field goal.

LSU’s defense stepped up with its most complete performance of the season, holding a powerful Georgia offense to 322 yards including 113 on the ground and 209 through the air. Linebacker Devin White had a game-high 13 tackles, safety John Battle added eight, and Kary Vincent Jr., Grant Delpit and Michael Divinity Jr. each had seven.

Georgia managed only 36 rushing yards in the second half, as LSU built a 16-0 halftime advantage and forced Bulldogs quarterback Jake Fromm into passing situations. Fromm finished 16-of-34 passing for 209 yards with a 27-yard touchdown pass to Riley Ridley in the fourth quarter and two interceptions.

Bulldogs running back D’Andre Swift had 72 rushing yards while Elijah Holyfield added 56 on seven carries including a 10-yard touchdown run in the third quarter that pulled Georgia within 10, 19-9.

LSU’s special teams also came through in a big way, forcing a fumble on a sniffed-out fake field goal in the first quarter and another recovered on a kickoff by Tigers freshman placekicker Avery Atkins at the Georgia 14.