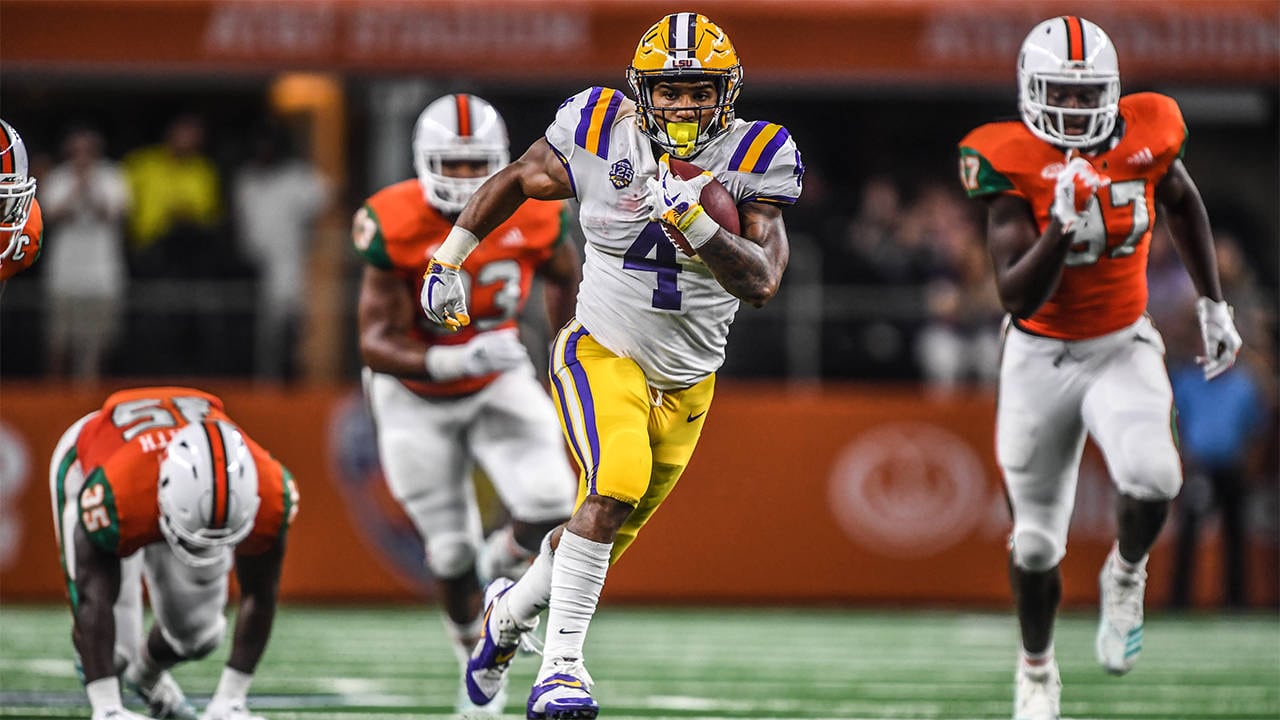 ARLINGTON, Texas — No. 25-ranked LSU took a commanding 27-3 halftime lead and cruised to its second Top-10 victory under head coach Ed Orgeron, 33-17 over No. 8 Miami on Sunday night in AT&T Stadium.

LSU (1-0), playing with 11 first-time starters, held the Hurricanes to 97 yards in the opening 30 minutes and led 33-3 entering the fourth quarter.

“You’ve got a happy football team in there,” LSU head coach Ed Orgeron said in his postgame press conference. “I want to congratulate our coaching staff for a great gameplan and for their preparation. I thought we practiced well all week. You could tell (Sunday) in the hotel that our guys were locked in.”

Just before halftime, LSU sophomore linebacker Jacob Phillips returned an interception 45 yards for a touchdown that put the Tigers in firm command of the contest. The Tigers, who committed a nation-best eight turnovers in 2017, continued to protect the football – and kept Miami’s “Turnover Chain” in its case.

After playing in the shadow of Leonard Fournette and Derrius Guice for the first three seasons in Baton Rouge, senior running back Nick Brossette earned his first 100-yard game including touchdown runs of 1 and 50 yards. The Baton Rouge native had 125 yards on 22 carries.

“I felt Nick would have a good night and he did,” Orgeron said. “I’m proud of him. He’s been tremendous all camp. I think he’s going to have an excellent season.”

“I think (offensive coordinator) Steve Ensminger did a great job of managing the game,” Orgeron said. “Although we made some mistakes early, Joe Burrow kept his cool and we were able to score 33 points.”

Another graduate transfer, senior Cole Tracy, made all four of his field goal attempts and tied a school record with a 54-yarder that skidded over the crossbar in the third quarter. Tracy also had makes from 43, 21 and 21 yards in his Division I debut.

“I was pleased with the defense, obviously,” Orgeron said. “I was little disappointed with those last two long (passes), but we’re going to get that fixed. (Miami) was obviously a very, very good football team, so for us to hold them to 17 points was a good feat.”

Rozier led the Hurricanes with 259 passing yards but was pressured throughout the contest by the agressive LSU defense. Jeff Thomas caught a team-high five passes for 133 yards.

LSU freshman receiver Terrace Marshall Jr., a former Parkway star, made his collegiate debut. He caught one pass for three yards early in the game.