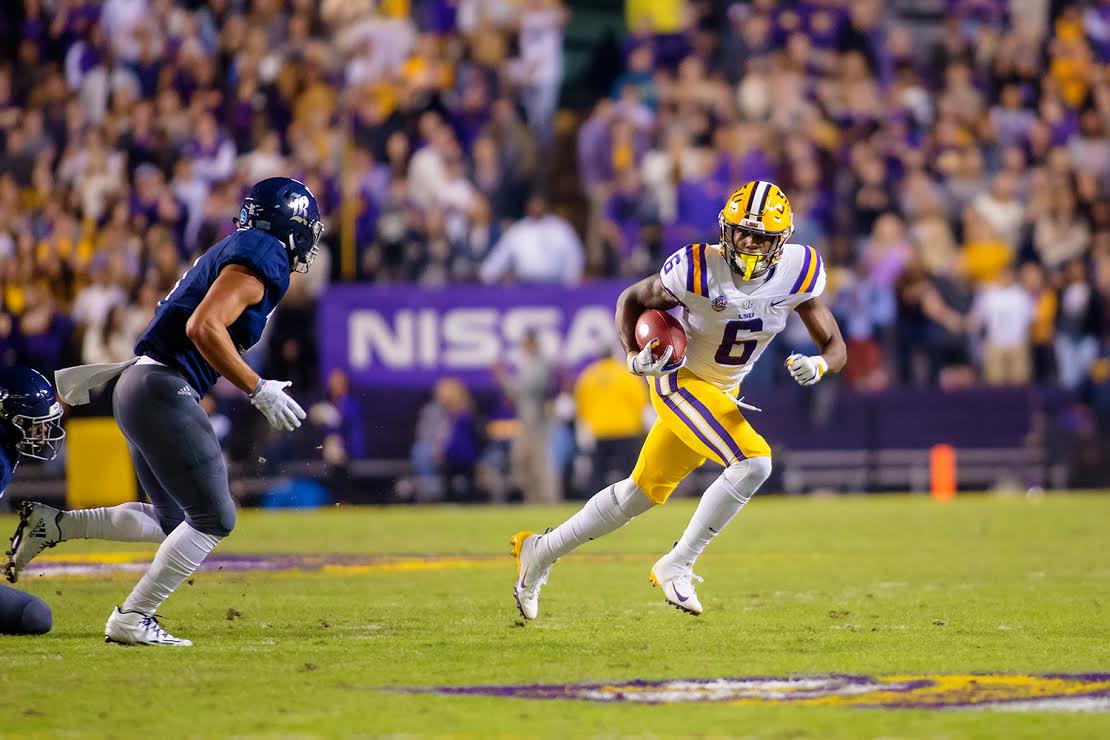 BATON ROUGE – LSU racked up 552 offensive yards and held Rice to 198 yards to work its way to a 42-10 victory on a chilly Senior Night in Tiger Stadium Saturday.

LSU (9-2, 5-2 SEC) built a 28-3 lead at halftime before the defense limited Rice to one touchdown in the second half.

LSU moved up two spots to No. 8 in the Amway Coaches Poll released Sunday.

LSU will travel to Texas A&M for its final regular season contest of 2018. The Tigers will square off against the Aggies in College Station, Texas, at Kyle Field in a game televised by the SEC Network on Saturday at 6:30 p.m..

The Tigers recorded 31 first downs and were 5-of-8 on third down conversions.

Joe Burrow finished the night with a career-high completions and yards after passing 20-of-28 for 307 yards and two touchdowns. Sophomore Myles Brennan entered the game midway through the third quarter and was 4-of-6 for 65 yards.

Foster Moreau and Derrick Dillon led the receiving corps, each recording career-high five catches. Moreau had a touchdown with a career-high 73 yards, and Stephen Sullivan had a career-high 94 yards with a touchdown. Moreau’s five catches gives him 46 career receptions, which puts him ninth all-time on LSU’s career list of receptions by a tight end.

The Tigers were led by Devin White, Jacob Phillips, JaCoby Stevens and Michael Divinity Jr. on the defensive front. White compiled nine tackles and Stevens, Phillips and Divinity each had seven.

Cole Tracy was a perfect 6-of-6 on point after attempts, and Avery Atkins recorded six touchbacks on his six kickoffs.

Rice quarterback Shawn Stankavage finished the night 7-of-13 for 101 yards. The Owls were led by running back Aston Walker who had 72 yards on 23 attempts. D’Angelo Ellis had three receptions for 66 yards, and Treshawn Chamberlain made 10 tackles.