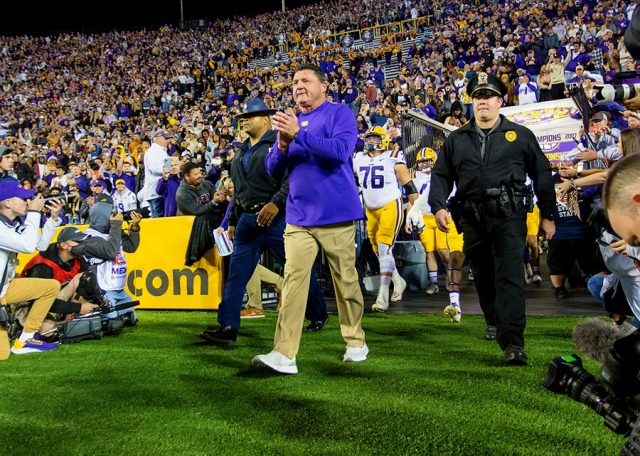 BATON ROUGE — Max Johnson connected with Jaray Jenkins for a 28-yard touchdown with 20 seconds to play, as the LSU Football team stunned No. 14 Texas A&M, 27-24, with an 85-yard game-winning drive on the final Saturday night in Tiger Stadium of the 2021 season.

The Tigers became bowl-eligible with the victory. Postseason announcements are expected on the Sunday following the Dec. 4 SEC Championship game.

In his postgame press conference following the game, Ed Orgeron announced that tonight would be his final game as head coach of the LSU Tigers.

Orgeron said the Offensive Line Coach Brad Davis will be the interim head coach for the duration of the season. On Oct. 17, it was announced that Orgeron and the Tigers would part ways following the 2021 season.

Johnson’s final-minute drive ensured Orgeron would go out a winner. The sophomore quarterback 5-of-7 passes for 86 yards on the game-winning drive that took 1 minute, 38 seconds.

On third-and-10 from the Aggies 28, Johnson stood in the pocket and took a hit just as he released a pass toward the right sideline and into the streaking path of Jenkins, who caught it at the 5 and touched down just past the goal line.

The crowd erupted as the Tigers took a 26-24 lead, and Cade York tacked on the PAT for the final margin.

The crowd erupted as the Tigers took a 26-24 lead, and Cade York tacked on the PAT for the final margin.

Orgeron, the 2019 National Championship head coach, finished 51-20 during his five-plus season tenure after taking over the 2016 squad as the interim head coach on Sept. 25, 2016.

Johnson completed 22-of-38 passes for 306 yards with three touchdowns, while Jenkins caught eight passes for 169 yards with touchdowns of 45 and 28 yards. Wide receiver Trey Palmer had a 61-yard touchdown catch-and-run and finished with five receptions for 64 yards. Freshman receiver Malik Nabers added six catches for 51 yards.

Placekicker Cade York continued his all-America season with field goals of 50 and 47 yards. York has made 15-of-18 field goals in 2021 including 5-of-7 from at least 50 yards.

LSU’s defense kept the Aggies at bay for much of the contest, helping the Tigers take a 17-7 halftime lead after allowing 6 net rushing yards.