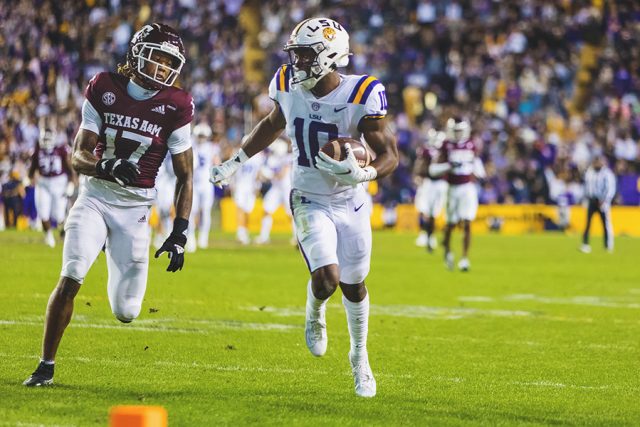 The LSU Tigers close a second straight disappointing season in the TaxAct Texas Bowl on Tuesday with a depleted roster and an interim head coach.

Quarterback Max Johnson led the Tigers against A&M. He subsequently transferred there.

Freshman Garrett Nussmeier is listed as the No. 1 quarterback on the two-deep depth chart.

However, The Athletic reported Monday that Garrett would not play and will redshirt. According to The Athletic, a waiver LSU requested from the NCAA allowing Nussmeier to play without losing his redshirt has been denied.

Walk-on Tavion Faulk is listed as No. 2 on the depth chart.Senior receiver Jontre Kirklin, a quarterback in high school, could get some snaps.

LSU also won’t have running back Tyrion Davis-Price, who decided to opt out of the game to prepare for the NFL Draft. Davis-Price rushed for 1,003 yards and scored six touchdowns.

Freshman Corey Kiner, who gained 271 yards on 65 carries, will likely get most of the carries Tuesday.

Bech led the Tigers in the regular season with 43 catches for 489 yards. Jenkins, who caught the winning touchdown pass against A&M, caught 33 passes for 479 yards. Nabers had 400 yards receiving on 26 catches in 10 games.

Defensively, LSU will be without linebacker Damone Clark and defensive tackle Neil Farrell Jr., both of whom opted out to prepare for the draft.

Parkway senior walk-on Lloyd Cole is listed as No. 2 at one cornerback position on the depth chart.