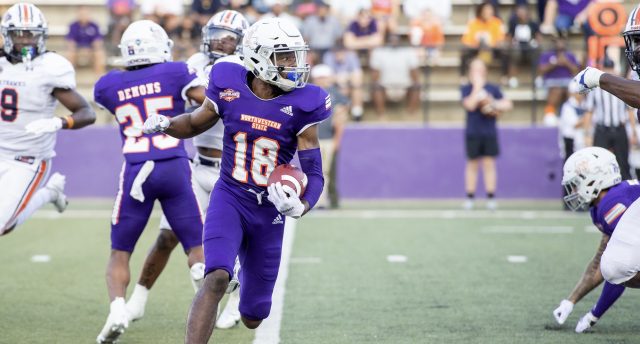 NATCHITOCHES – One thing the Northwestern State football team did not lack for Saturday night was scoring opportunities.

Converting those chances was a little more difficult.

The Demons went 1-for-6 in the red zone against UT Martin in Northwestern State’s home opener at Turpin Stadium, falling 35-10 to the visiting Skyhawks.

“When you look at this game, you go back to the first half,” fourth-year head coach Brad Laird said. “The opportunities we had, four times plus-30 or in and not getting any points out of it. Fast forward to the second half, a great drive and a great call on fourth down for the touchdown to Jay (Griffin). Then get the ball back, driving down and have the turnover at the goal line.

“We got the momentum, but we weren’t able to sustain it.”

Eddie Godina’s 27-yard field goal at the first-half buzzer capped a 10-play, 65-yard drive to get the Demons on the board at 21-3.

For the second straight week, Northwestern State took the second-half kickoff and drove down the field. Unlike a week ago at Alcorn, the Demons completed the drive as Kaleb Fletcher found Jay Griffin in the along the far sideline for a 21-yard touchdown on fourth and 9.

“I’m happy we got the offense moving more than in the first two weeks, but there are obviously things we have to get cleaned up during the off week,” said Griffin, who finished with five catches for 33 yards. “Fixing our mental mistakes and not hurting ourselves in the red zone – that’s what we’ve done.”

The Skyhawks jumped to a 14-0 lead after a first quarter in which UT Martin racked up 229 yards offense. A strip sack by Isaiah Longino and ensuing fumble recovery by Jared Pedraza – one of two on the night for the linebacker – kept the Skyhawks from going 3-for-3 on scoring drives in the opening quarter.

The Purple Swarm defense again settled down across the next 40 minutes of game play, holding the Skyhawks to 62 yards in the second and third quarters.

“After we felt out the offensive line on a couple of plays, we started sitting in our gaps and making adjustments where they were needed,” said defensive end John Daigle, who led NSU with a career-high eight tackles. “Consistency is key with us. It’s not every single play we weren’t consistent, but when it counted, we weren’t. To win a game, you have to be consistent every play.”

The Demons ran for 174 yards against a UT Martin defense that surrendered and average of 73 years per game on the ground and posted a season-high 423 yards. Fletcher led NSU with a career-high 71 rushing yards while going 28-of-47 through the air for 249 yards.

NSU, however, was undone by its inability to finish drives.

Northwestern State had a field goal blocked and missed another in the red zone before Godina connected on the field goal at the end of the first half. Twice in the second half, the Demons were unsuccessful on fourth-down red-zone attempts.

The costliest red-zone miscue came on the possession after Fletcher hit Griffin for the touchdown.

The Purple Swarm held UT Martin to a three-and-out, forcing a punt and giving the Demons the ball at their 25.

On the 11th play of the drive, John Ford picked off Fletcher at the 1-yard line and raced 65 yards back to the Demon 33-yard line. Six plays later, Zak Wallace’s 5-yard touchdown run re-established UT Martin’s three-score advantage at 28-10.

“The opportunities early to get points on the board after putting together drives and the turnovers – whether it’s a turnover on downs or the turnover at the goal line – that’s four opportunities for points,” Laird said. “If you don’t take advantage of those opportunities in terms of getting points, that’s something I talked about. We have two weeks, beginning with this open date, and it’s going to be important, starting with me, to look in the mirror as coaches and players. What do we need to do moving forward, because as we kick off two weeks from today, we’re 0-0 (in conference play).”

After its open date, the Demons host Incarnate Word in NSU’s Southland Conference opener on Oct. 2.