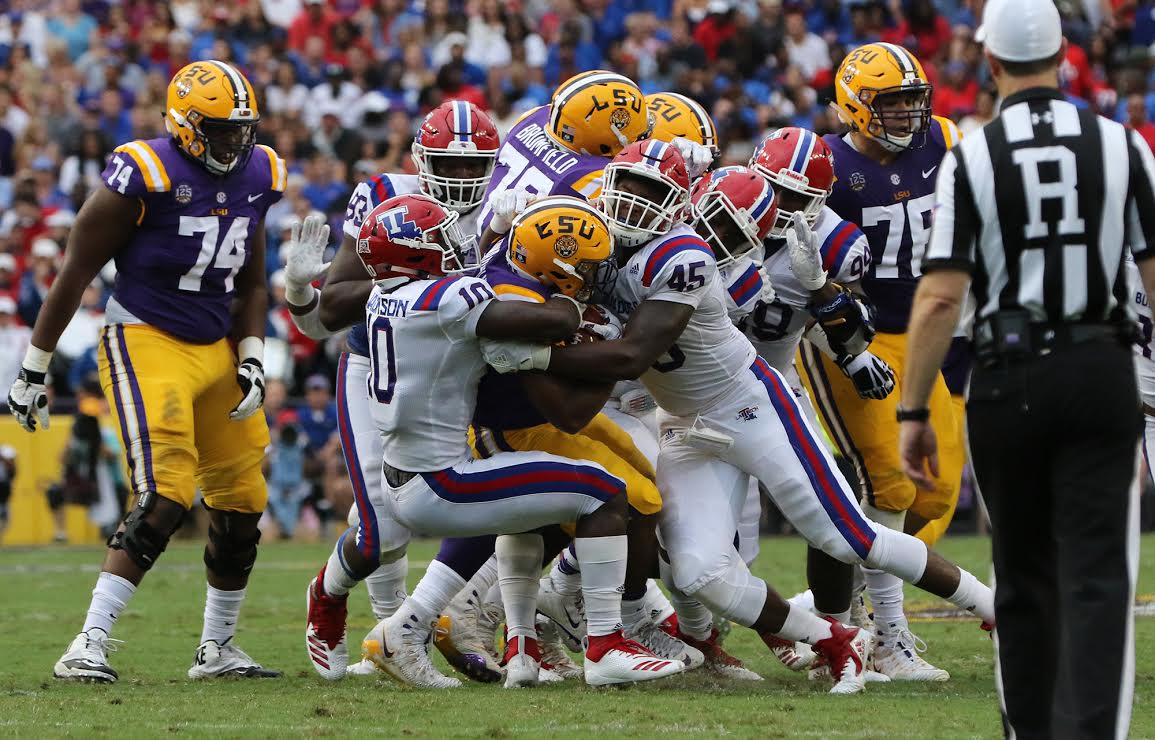 BATON ROUGE — The Louisiana Tech Bulldogs gave No. 6 LSU a scare Saturday night, but the Tigers scored a couple of fourth-quarter touchdowns to pull away in a 38-21 victory.

“Give Louisiana Tech some credit,” LSU head coach Ed Orgeron said. “I thought they had an excellent plan, especially on offense. Their line protected very well. Their receivers made some plays. I thought their quarterback played fantastic. We got up 24-0 or whatever it was and could’ve put them away but we didn’t. They kept on fighting.

LSU, which remained No. 6 in the coaches’ poll released Sunday, raced to a 24-0 lead. But Louisiana Tech (2-1) scored 21 straight points to get within three. Tech’s final TD came on a 42-yard pass from J’Mar Smith to Adrian Hardy with 12:57 to play.

The Tigers answered with a 70-yard touchdown drive capped by Nick Brosette’s 2-yard run. After stopping Smith for no gain on fourth-and-1 from the Tech 46, LSU took seven plays to score, a 1-yard run by Clyde Edwards-Helaire.

“It’s a disappointing loss, but it was a heck of a football game,” Tech head coach Skip Holtz said. “To LSU and Coach Orgeron, I give them an awful lot of credit. When this game was in doubt at 24-21, they did the things they needed to do to win the game. They’re a talented team. But I can’t be more proud of the players and coaches in our locker room and how they competed in this football game.”

Edwards-Helaire and Brossette combined for 214 yards and five touchdowns.

Sophomore Edwards-Helaire had career-bests of 20 carries, 136 yards and two touchdowns, while Brossette tallied 78 yards on 20 carries and scored on runs of 1, 1 and 2 yards.

Cornerback Kristian Fulton forced a fumble and linebacker Devin White returned it to the Louisiana Tech 3, leading to Brossette’s second score on the first play of the second quarter.

Following a Cole Tracy 24-yard field goal, LSU defensive back Ed Paris intercepted a pass broken up by White at the Bulldogs 28. On the next play, Edwards-Helaire scored to give LSU a 24-0 lead.

Linebacker Jacob Phillips had a team-high 13 tackles, while White added 11 including 2.5 behind the line of scrimmage and three pass breakups. Safety Todd Harris Jr., who started in place of John Battle, had nine tackles.

Smith finished 27-of-50 passing for 330 yards with three touchdowns and one interception. His top target was Hardy, who had 10 catches for 181 yards with touchdowns of 20 and 42 yards.

Next up for LSU is Ole Miss at Tiger Stadium on Saturday night. Kickoff is 8:15 p.m.