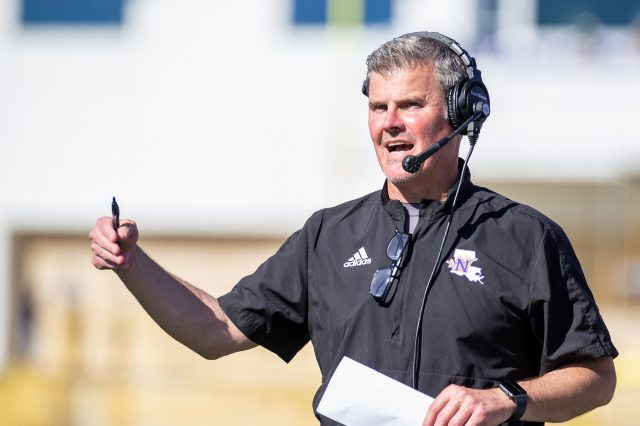 “It’s a good start,” Laird said. “That’s what it is. It’s a good start as we build toward the 2022 season. When you talk about recruiting, it doesn’t stop. Today is signing day, but this thing will continue to press forward. We were able today to fill some holes we needed with some older guys mixed in with a couple of high school guys. It’s a start, and we look forward to 2022 as this continues to grow.”

Six of the junior college signees hail from the talent-rich Mississippi Association of Community Colleges Conference, which long has been a fertile recruiting ground for Northwestern State.

Williams was a first-team All-MACCC North selection at Coahoma, recording 57 tackles to lead the Cougars. He is joined by a pair of defensive linemen in Itawamba’s Lott, who was a preseason All-American, and East Central’s Gibson, who notched 31 tackles and two sacks in two seasons at the Decatur, Mississippi, school.

Patterson joined Williams on the MACCC All-State team, earning first-team honors as a return specialist who averaged 23.6 yards per kick return and 8.5 per punt return. In addition to his return skills, Patterson was the Lions’ third-leading receiver, hauling in 27 passes for 357 yards and a team-best eight touchdowns. Fellow receiver Rogers caught 70 passes in his Copian-Lincoln career, covering 776 yards in 21 games.

Up front, Mabry has a reputation as a locker room leader who “plays fast in the run game and very long in pass protection.” In East Central’s five-game COVID-shortened 2020 season, Mabry posted a single-game high grade of 93 percent against East Central.

Lacy led Kilgore College in rushing in the fall with 474 yards and added 134 more yards in the passing game. In Kilgore’s shortened spring season, Lacy showed his big-play ability, rushing for 604 yards on 72 carries, an average of 8.4 yards per rush.

“Offensively, we were able to add some experience on the interior of the offensive line, at running back and added a couple of guys at receiver,” Laird said. “Defensively, we got a couple of defensive linemen and linebackers who will continue to grow in that area. I’m excited about what our coaches were able to do. This time frame of playing in the spring, fast forward to playing 11 games in the fall and to end it with the signing period is a credit to our coaches, our staff and our players for what they did throughout this process.”

“Their experiences they had recruiting those areas in the past and the relationships they had built in the past really helped us there,” Laird said.

Both of the Demons’ high school signees in the early signing period came on the defensive side of the ball.

Morgan meanwhile led Louisiana Class 4A defenders in tackles as a junior with 131 (42 for loss) and followed that by earning Defensive Player of the Year honors in the district as a senior, finishing with 119 tackles (25 for loss). A year ago, Morgan played his first career game at Turpin Stadium, racking up 16 tackles in a loss to Carencro.

“We’re going to sign the majority of our high school young men in February,” Laird said. “Both of them had been on campus, which was key for us to be able to sign them. They had been here and had the opportunity to see Natchitoches and Northwestern State and mingle with our coaches. That was important in our process to sign them.”

Morgan’s performances in his final two seasons did not surprise Laird.