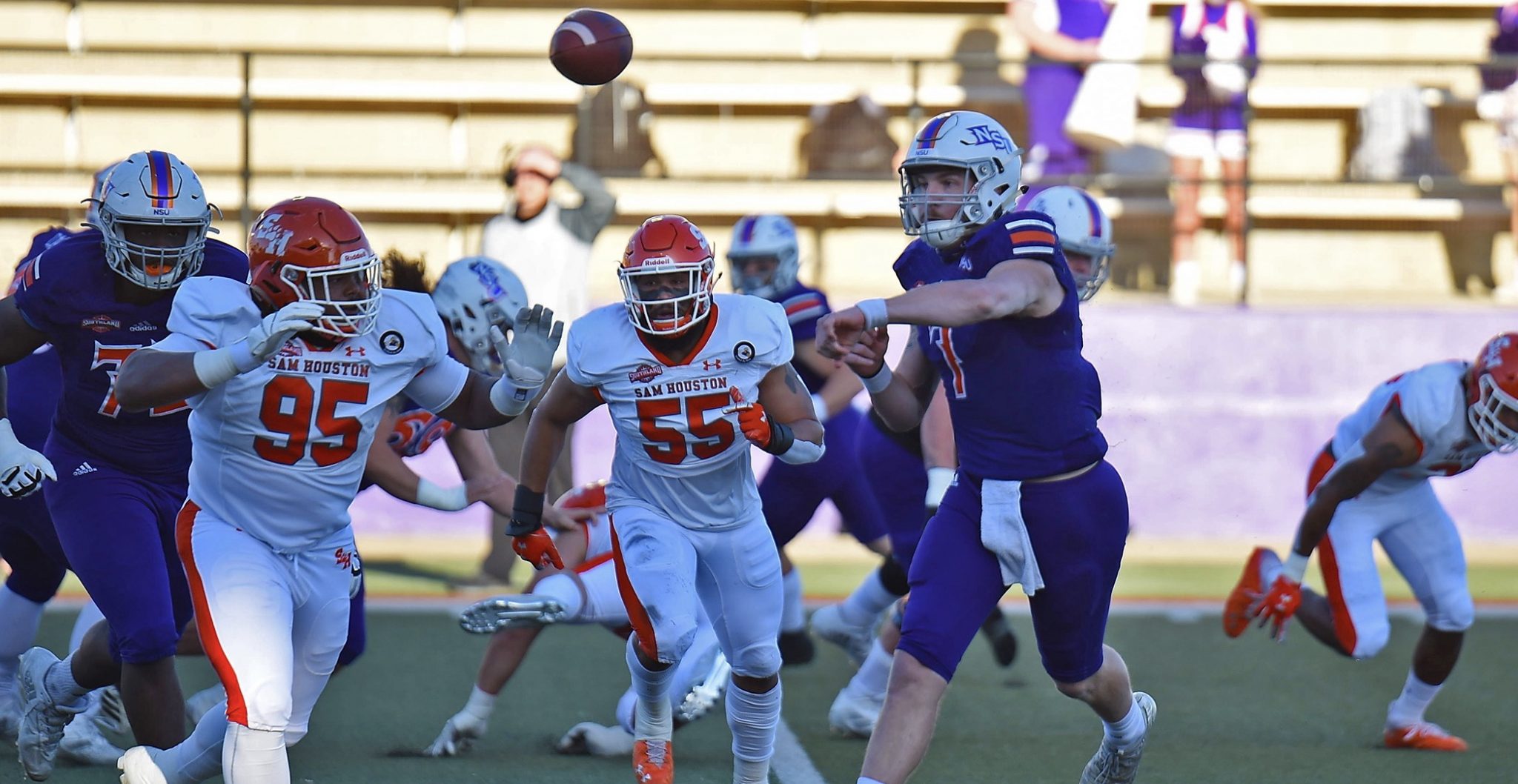 SAN ANTONIO — When quarterback Bryce Rivers first stepped under center as a starter, it was in a Texas-San Antonio uniform for the Road Runners in 2018.

More than two years later, he’ll walk back into his hometown as a starting quarterback once more, this time in Northwestern State purple to face Southland Conference Incarnate Word.

He’ll lead a Demons squad (0-5, 0-5 SLC) looking for its first win this spring but one that’s showed plenty of promise.

NSU will face a No. 19 Cardinals team (3-1, 3-1 SLC), its fourth ranked opponent in the six-game spring slate, after the Demons have lost to the three previous ranked opponents by just one score each.

“I’ve got a lot of family and friends coming in, and I’m asking half the team for their tickets,” said Rivers, a Stevens High standout who played two seasons at UTSA. “If you ask any of our coaches, we’re a couple plays away from beating another team.

Rivers is part of a three-quarterback race to start the season, but he was the only quarterback to take snaps against No. 5 Sam Houston this past week in a 24-16 loss.

He became just the second Demon to top 400 passing yards, completing 29-of-51 passes for 410 yards with two touchdowns and no turnovers.

“The first thing you see is the ability to protect the ball from the quarterback spot,” said NSU coach Brad Laird. “Bryce made quick decisions and made the right decisions where to go with the ball, and that was paramount because of what Sam Houston has done defensively this spring.

“We’re building off that, and we’re continuing to put all of it together. There were times we’d like to get the running game going to control the clock and field position, but we made plays in the passing game and had receivers step up.”

Antonio hauled in 10 catches for 190 yards while Bridges added six receptions for 103 yards with a touchdown for each.

“We’re starting to gel well together,” Rivers said. “The receivers come to the sidelines and ask us what we see, and we ask them what they see.

“We’ve got a lot of smart guys who like to talk football, and it helps a lot with the quarterbacks. We had some misreads and stuff we can clean up, and it’s exciting that we can be better and have a lot more room to grow.”

Laird added that Rivers’ accuracy has improved tremendously over the spring, adding that piece to his acute mental competency.

Now the offense is concentrating on having strong rushing and passing performances in the same game.

NSU has rushed for more than 200 yards in three of the five games and thrown for more than 350 in two games, but the Demons haven’t had an efficient rushing and passing attack in the same game.

“We’re fortunate to have one more opportunity this spring after going back to the fall and not knowing if any opportunities would be available this spring,” Laird said. “We’re continuing to build in all three phases and we’ve done some things really well and things we can improve on not just this week but next fall.

“But I’ll go back to the Sam Houston game. We’re coming off a short week, it’s spring break, we’re playing the No. 5 team in the nation, and we start the game with a turnover that they turn into a touchdown. A lot of things could have happened at that point, but this team continued to fight and play for each other, and we gave ourselves a chance at the end to get an onside kick and possibly go down and score. I couldn’t be more proud of how we prepared during that short week and how we came out and played.”

NSU is trying to find consistency in special teams and defense as well.

Punter Scotty Roblow was named SLC Special Teams Player of the Week after he averaged 50.5 yards on four punts, including one inside the 20-yard line.

Returner Devin Duvernay leads the nation in kickoff return yards (452) and fourth in average (30.1 yards per return) on 15 attempts.

The Demons had an extra point blocked against SHSU, the sixth blocked kick/punt of the season.

Arguably the unit that’s displayed the most consistency is the defense.

Despite facing its fourth top-10 offense in UIW this spring, NSU has improved its scoring defense nearly 11 points to 26.8 points per game this season.

“We have the mindset to never give up, to live that Purple Swarm,” said senior defensive lineman Darius Whitfield. “We have talent on the line, at linebackers and in the secondary.

“We still haven’t put a full game together when you think about things like third-down defense, but we’ve battled No. 7 Nicholls, No. 5 Sam Houston and other teams, and that gives the defense an edge. We come in with a certain type of swagger, and we know we have pieces as an older team mixed with young guys. We just have to do the little things and execute on both sides of the ball.”

No opponent has scored more than Nicholls’ 31 points in the opener, and pressure on the quarterback has played a role in that.

NSU has 15 sacks combined in the past four games, and linebacker Jared Pedraza (three sacks) leads 11 different Demons with sacks this season.

“The defensive line stresses pressure on the quarterback and stopping the run,” Whitfield said. “We have really good chemistry, and (defensive line coach LeDell Love) deserves a big shout out.

“We’re working nothing but technique before practice, and we’re out there doing drills before everybody else gets out to practice.”