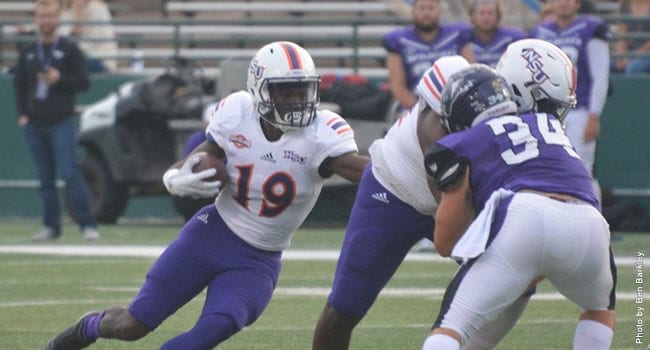 But the Demons didn’t stack up enough scoring to hold off their hosts. The Wildcats ran off 17 unanswered points with three long scoring drives in a 10-minute stretch starting late in the third quarter and took a comeback 25-22 victory in a battle of struggling Southland Conference teams.

NSU (1-8 overall, 0-7 in the Southland) didn’t have a halftime lead remotely reflecting its’ 275-124 yardage advantage in the first two quarters, holding a meager 13-5 edge on the scoreboard. The Demons allowed the Wildcats (2-8, 2-6) to block the point-after kick and score a defensive two-point conversion after NSU’s initial touchdown, then came up empty on two drives inside the ACU 10.

Former Haughton star J.D. Almond made his first start of the season. He completed 22 of 33 passes for 225 yards with one touchdown and one interception.

But by then, the Wildcats had found their offensive groove against the Demons’ short-handed defense. While ACU scored on five of seven series, including four straight in the second half, NSU twice gave up the ball on downs, once at the Wildcats’ 6, and had to settle for a 40-yard Eric Piccione field goal with 4:31 remaining, failing to answer the touchdown that completed ACU’s rally and gave them a 25-19 advantage.

The winners ran out the remaining time by notching three first downs in a game-clinching eight-play, 36-yard drive.

It neutered some good numbers by Llorens and Green. Llorens posted his third 100-yard rushing total in four games, going for 110 on 22 carries and adding 75 yards on four receptions, scoring on the ground and with a catch. Green added 98 yards rushing and 184 all-purpose yards.

“I don’t think numbers matter when you don’t win the ballgame,” said Almond. “It’s got to be better.”

The depleted Demon defense held the Wildcats to just eight rushing yards through three quarters, but 79 in the decisive fourth quarter. ACU sophomore quarterback Dallas Sealy threw for 304 yards (29 of 45 with no interceptions) and ran for a team-high 52 yards, scoring once each way.

“We had opportunities on fourth down that we needed to take to help our defense. We knew we were thin on that side and it got tougher in the second half (with more injured Demons limping off),” he said. “I thought the defense played well for a lot of the night, but just wore down and couldn’t hold them off.

“I’m really disappointed for those guys in the locker room,” he said. “On both sides of the ball, they gave a heck of an effort tonight.”

NSU absorbed a third down-to-the-wire defeat in Southland play, losing by a combined seven points to Incarnate Word, Lamar and ACU. Penalties added to the Demons’ degree of difficulty, with 12 infractions marked off for 90 yards. Eight, for 57 yards, came in the second half.

“We got some critical penalties once again,” said Thomas. “We had some that put us behind the sticks. We had some that helped ACU keep moving. That catches up with you in a close game.

“You’ve got to give ACU credit. They kept battling and took advantage of their opportunities, and did not make critical mistakes.”

Thomas also praised Almond, who has been NSU’s third-team quarterback most of the year, absolving him of blame on the costly interception on second-and-goal on the ACU 3 late in the first quarter.

“We were just late on the ball. J.D. stumbled coming out with the snap, and it threw the timing off,” said Thomas. “Can’t really fault the guy, considering he missed all of preseason (with poison ivy) and this was his first week of getting really extensive work. He competed very hard, did a really good job and gave us the chance to win.”