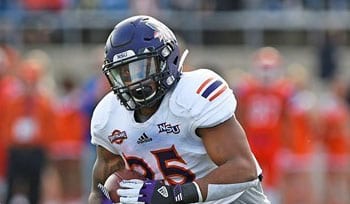 BEAUMONT, Texas – For 57 minutes Saturday night, Northwestern State was close to dominant, but that was not long enough.

Lamar scored two late touchdowns, sandwiched around a wild scramble for an onside kick and ending with a fourth-down leaping grab in the back of the end zone by DeWan Thompson of the fourth TD pass by Carson Earp with six seconds remaining. Juan Carranco’s extra point kick, hardly a sure thing, wobbled through and gave the Cardinals a 32-31 Southland Conference football victory.

“We did a lot of good things, but not enough,” said Demons’ coach Jay Thomas. “We didn’t close it out. We talk about playing 60 minutes. We played hard for 60. But in every aspect, we didn’t play well enough for 60.”

Nursing a 13-point lead late in the game, NSU didn’t convert a third-and-4 and punted for only the second time with 3:01 remaining, opening the door for the Cardinals’ comeback. Trailing 31-18, Lamar covered 74 yards in five plays and just 1:07 elapsed, getting a 36-yard Earp bomb to Marcus Daggs down the NSU sideline to draw within 31-25 with 1:43 to go.

The Cardinals won a frantic battle for the ensuing onside kick.

“It looked like seven guys had their hands on it, and it finally squirted under one of their guys and he kept it,” said Thomas.

Defensive back Caleb Abrom was in the right place at the right time to capture the onside kick. Lamar needed nine plays to cover the 58 yards and win the game. On fourth down with 14 seconds left, Earp faced a three-man rush, and had to move around in the pocket before sensing pressure from NSU’s Zak Krolcyzk and flinging a pass to the left side of the end zone, where Thompson was working behind a Demon defender and won a leaping contest, snatching the ball as he fell with the game-tying TD.

“I thought they tackled Zak, pulled him by his jersey to the ground, and that wasn’t called,” said Thomas.

The decisive extra point was in doubt. NSU true freshman nose tackle Christian Bluiett, a Beaumont native, had blocked the PAT after Lamar’s first touchdown. The Cardinals were using their second-team kicker whose 22 and 30-yard field goals, his first of the season, weren’t well hit. But Carranco weathered two NSU timeouts, Lamar’s line held firm, and the game-winning kick sidewinded through the uprights.

Meanwhile, the Demons’ junior kicker, Eric Piccione, missed well-hit second-half field goals of 45 and 38 yards after drilling a 45-yarder to open the scoring at the end of NSU’s first series of the game.

“We had plenty of ways we could’ve won,” said Thomas. “This is tough to take. These guys laid it on the line and were so close, but we didn’t finish. You have to finish or do enough so that the finish doesn’t matter.”

The Demons got 126 yards rushing on 13 carries from sophomore Ronald Green, his second straight 100-yard game, but he became ill after halftime and wasn’t able to return until he returned the final kickoff, hauled down at the NSU 35.

Llorens posted his fifth career 100-yard game and gave NSU its first 200-yard rusher since 2007 as the Demons piled up their highest ground total since 2004, averaging 7 yards per rush.

NSU will be home for three of its next four games, starting with homecoming next Saturday night against rival McNeese (3-4, 2-3), which fell at home 35-0 to nationally-ranked Central Arkansas.