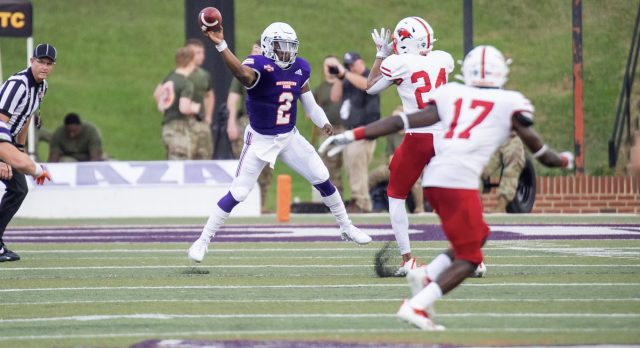 HOUSTON – The Northwestern State football team has not been on the road in nearly a month.

When the Demons head to Houston Baptist for a 6:05 p.m. Saturday kickoff, they will do so with the hopes that at least one part of their previous road games comes with them.

“You look back at the first two weeks – both of those on the road – and we started fast, compared to the last two games at home where we didn’t get off to a quick start,” fourth-year head coach Brad Laird said. “That’s something I have to look at. Is there something I can do throughout the week, throughout practice, to make our guys understand the importance of a fast start?”

Saturday’s game can be seen on ESPN+. It can be heard on the Demon Sports Network, flagshipped by 94.9 FM The River in Natchitoches. Free streaming audio is available at www.NSUDemons.com and through the Northwestern State mobile app, which can be downloaded free for Apple and Android devices.

NSU enters off its most productive game in terms of points (27) and yardage (501) in a 38-27 loss to Incarnate Word on Oct. 2. Houston Baptist, meanwhile, dropped its Southland opener, 48-17, to Nicholls on the same day.

Part of NSU’s increased production came from the healthy return of several players after an open week. Included in that group was preseason second-team All-Southland Conference offensive lineman Khalil Corbett-Canada.

Corbett-Canada anchored an offensive line that did not allow a sack and helped form a pocket that allowed quarterback Kaleb Fletcher to ring up a career-best 319 yards on 36-of-48 passing. Additionally, the Demons averaged 5.1 yards per carry on 36 rushing attempts.

“It felt fantastic to be out there,” said Corbett-Canada, who made his season debut against the Cardinals. “It was good to play with my boys and actually go against somebody and not sit there watching and supporting.”

Northwestern State fought its way back from an 18-point, second-quarter deficit to cut UIW’s lead to eight late in the third quarter, re-emphasizing Laird’s focus on a fast start on the road.

In the season opener at North Texas on Sept. 4, NSU trailed the Mean Green by 10 at halftime and saw an illegal shift penalty wipe out Jay Griffin’s 38-yard third-quarter touchdown catch that would have sliced the lead to three.

A week later, the Demons answered an early Alcorn field goal with Fletcher’s touchdown pass to Kendrick Price that gave NSU a lead it held until late in the fourth quarter.

Similar to Northwestern State, the Huskies have had opportunities to score their first win of the season earlier. Included in HBU’s 0-4 start are a pair of 10-point losses – Sept. 2 at New Mexico and Sept. 18 at Prairie View A&M.

With both teams sharing the same record, Laird said he expects the same type of game he sees every week.

“It’s a Southland Conference football game,” Laird said. “It showed here against UIW. Look at the scores around the league. Those are the types of football games you’re going to get. No matter the record, no matter who you’re playing, it’s going to be a 60-minute ball game. You have to prepare for that. We have to execute and be consistent throughout the game.”