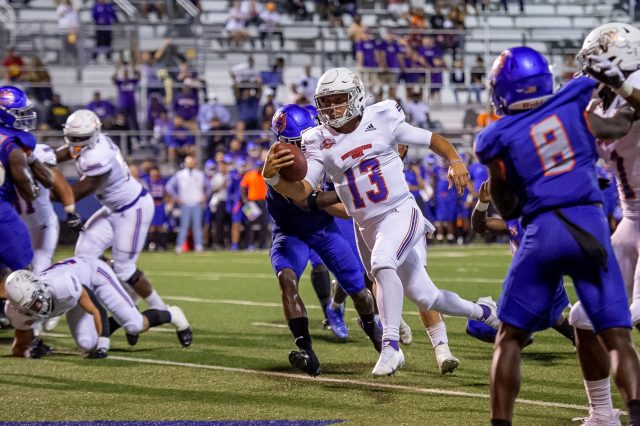 HOUSTON – Nearly a month ago, the Northwestern State football team had the chance to close out a road win and came up short.

Given a second chance Saturday night, the Demons finished the job.

“They really helped me execute tonight. It feels like the beginning. We want to build on this, get better every week and keep executing. We’ll keep getting better as we go along.”

Behind Clement and a pair of running backs who were late additions to its roster, Northwestern State (1-4, 1-1) grabbed a win in its Southland road opener for the second time in four seasons under Laird.

A week after struggling to convert three UIW turnovers into points, the Demons cashed in on their plus-2 turnover margin against the Huskies (0-5, 0-2).

“We had the same scenario at Alcorn,” fourth-year head coach Brad Laird said. “We score and get the momentum, and they score to take the lead back. Our guys, our sideline, never wavered from their belief. We had to punt, but the defense got a turnover and the offense punched it in. The work our guys put in, they deserve this moment tonight.”

For the third straight week, the Demons found themselves facing a double-digit, first-quarter deficit as the Huskies struck first on Fudge Woods’ 33-yard touchdown run and added a 37-yard Gino Garcia field goal after NSU’s lone turnover of the game – a fumbled punt snap.

On that ensuing drive, the Purple Swarm defense set the blueprint it followed for most of the night – stifling the Husky offense. Although Houston Baptist extended its lead, it did so after a three-and-out that netted three yards.

Through three quarters, the Purple Swarm limited the Huskies to 194 yards total offense and 10 points, giving the Demons a chance to overcome a season-high 13 penalties, including one that erased a 31-yard touchdown pass from Fletcher to Jay Griffin in the second quarter.

“Everyone’s been grinding,” said senior linebacker Kyle Moore, who jarred loose the fourth and final HBU fumble of the game. “We’ve been trying to get a win. It was a great feeling to make a play for my team and get this much-needed win.”

HBU marched 67 yards in five plays, covering the final 30 on Orion Olivas’ pass to Branden Walker with 12:25 to play.

Moore and company had the answer after Scotty Roblow’s punt pinned Houston Baptist at its 17.

Olivas completed a pass to Jaylon Coleman, but Moore forced a fumble that Shemar Bartholomew recovered at the Houston Baptist 27.

From there, Clement did most of the heavy lifting, including a 17-yard jaunt to start the drive as the Demons took the lead for good on his 2-yard run.

The ground game arrived in the second half for NSU, which ran for 23 yards on 22 carries in the first half.

Behind Veasley and fellow freshman Bryce Dealey, the Demons ran for 110 yards and two scores on 25 second-half carries.

Playing without running backs Scooter Adams and Aubrey Scott, the Demons got a lift from Veasley, who finished with 70 yards on 12 carries and a touchdown in his college debut.

“It feels good,” Veasley said. “I don’t have the words to say what it means. My first college game. After fall camp, (Curtis Williams, Dealey and I) were the bottom three. People started getting hurt and started leaving. We all stayed the course and stepped up.”

Williams (32 yards) and Clement (31 yards) buttressed the two freshmen in the backfield, but Clement was quick to credit another group for the half to half swing.

“The O-line picked the energy up and really opened up some holes,” Clement said. “They paved the way for me and our running backs. Those big guys really did their thing.”

Laird agreed with his quarterback, expanding on his point.

“You never know when your opportunity is going to come,” Laird said. “(Clement) came in and gave us a spark. He made plays with his arm and his legs. Proud of him taking advantage of his opportunity, but it was a team win, 100 percent, in all three phases – offensively, defensively and special teams.”

The Demons return home to start a two-game homestand Oct. 16 when they host McNeese. Kickoff against the Cowboys is set for 3 p.m.