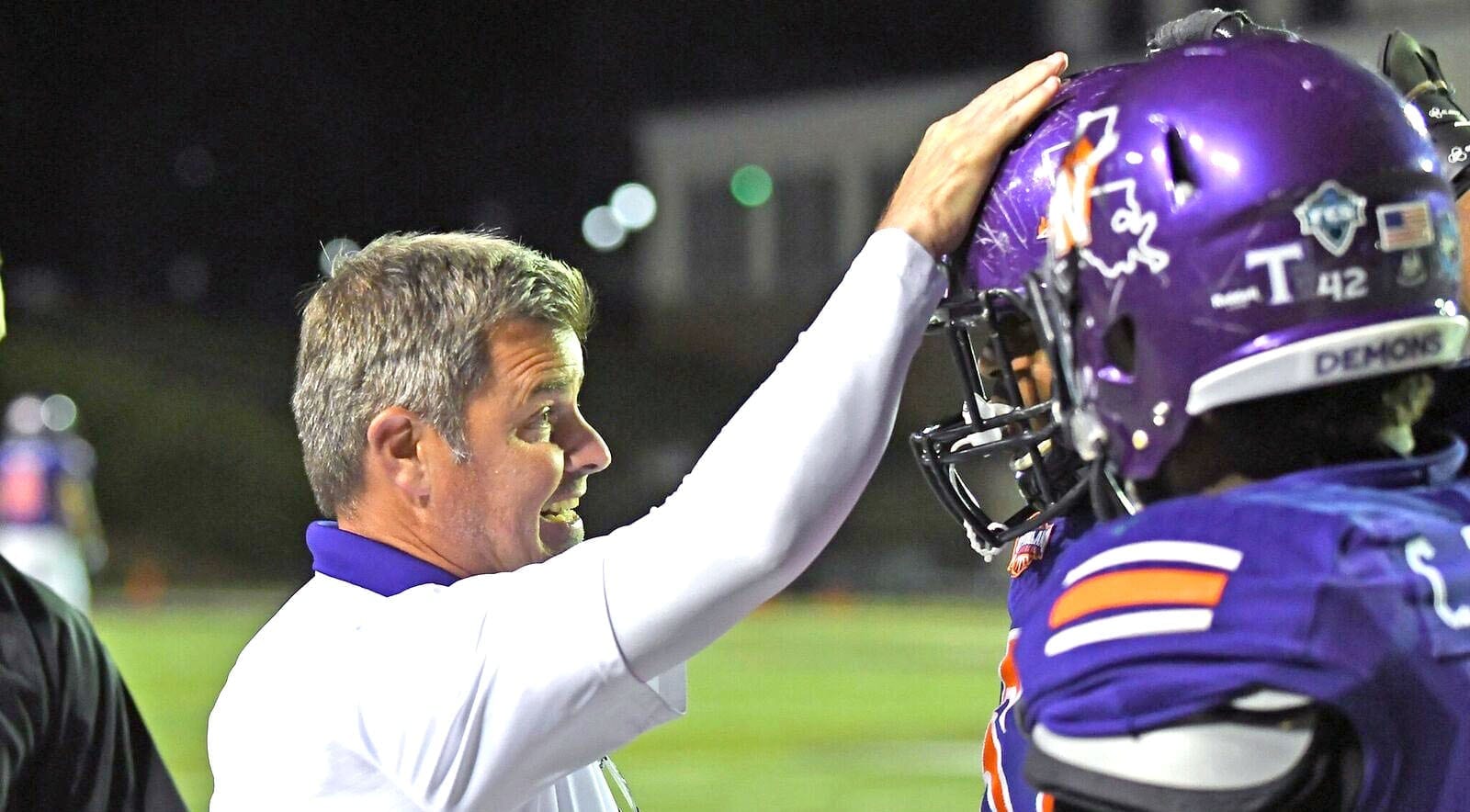 Laird, 44, will be officially introduced as head coach early next week on campus. The university is currently on Thanksgiving break. Laird’s promotion from associate head coach and defensive coordinator, a position he assumed this past January, is pending approval of the University of Louisiana Board of Supervisors, which oversees nine state institutions including Northwestern State.

“While NSU has hired a great number of coaches and staff from around the country through the years who have had a high level of success, sometimes the best choice is right in your backyard. So with tremendous confidence, I’m announcing that Brad Laird will be the new football coach at Northwestern State University,” said Burke.

“To come back to your alma mater was an exciting opportunity a year ago for (wife) Renee and I, and although I didn’t envision this day, it’s even a greater thrill to have the trust of (NSU president Chris) Dr. Maggio, (vice president of external affairs Jerry) Mr. Pierce, and Mr. Burke,” said Laird.

“What a time to be here at Northwestern State University, with the momentum that has taken off first under (former president, now UL System president) Dr. (Jim) Henderson, and increased under Dr. Maggio, with record enrollment and so many great things happening here now and coming up in the near future.

“Our football team has momentum as well. We won three of our last four games, played our best football as the season went forward,” said Laird. “It’s an exciting time for everybody in the Northwestern family to come together to bring this program to the heights we want to make sure to reach, on a year-to-year basis competing for championships on and off the field, academically and athletically.”

In 2017, Laird restored the “Purple Swarm” brand for the NSU defense, which had struggled in the past two seasons but showed flashes of brilliance, especially down the stretch. In the past month, the Demons twice recorded 13 tackles for loss in wins over Houston Baptist and Abilene Christian, and staged a series of goalline stands, two in Saturday’s victory over SFA. Monday, senior linebacker Peyton Guidry was named the national FCS Defensive Player of the Week after making 18 tackles against the Lumberjacks.

A wide-ranging list of attributes made Laird the clear choice to take over the program, said Burke.

“Brad has many assets that make him an outstanding choice to lead his coaching staff and over 100 student-athletes while also representing NSU with a high level of class and professionalism,” said Burke. “Having been outside of athletics in an administrative role with the NSU Foundation, he has a ‘global view’ of our university and a great appreciation for all involved in the Northwestern family.”

Laird left coaching in 2012 and served as director of university advancement, overseeing the NSU Alumni Association and the NSU Foundation, into 2013 before his father retired as Ruston’s football coach and he was wooed to fill the post. His father remained as Ruston’s athletics director until his sudden passing in May 2015.

“Brad got back in the game with a special opportunity at Ruston High School before he came back to us last winter,” said Burke. “He has an outstanding coaching pedigree, strong relationships with the high school coaching community, and a perspective on our football program gained over the past year which gives him a tremendous head start as he assumes leadership of the program. Perhaps the best intangible is his burning drive and desire to elevate the success level of Demon football for our campus and community, as well as for our loyal fans and the NSU football alumni base.”

Laird returned to NSU 10 months ago from his high school alma mater, Ruston High School, where he averaged more than seven wins in four playoff seasons as head coach. He was also the Bearcats’ athletics director in 2015-16.

His 2016 Bearcats were ranked sixth in Louisiana’s largest prep classification, Class 5A, and became only the third RHS team since 1990 to win at least eight regular-season games.

Laird was named to NSU’s Top 100 Demon Football Players roster during the centennial celebration for the program in 2007.

As a coach, Laird was running the Purple Swarm defense when NSU was second nationally in total defense (2004, 274.7 yards allowed pg) and ninth (2003, 287.3 ypg) and produced 75 turnovers from 2003-05. The Demons set three NCAA records and led the Southland Conference in total defense and rushing defense, also ranking highly in pass defense each season. The Demons won their most recent Southland championship and made their last FCS playoff appearance in 2004.

An all-state quarterback in the state’s largest classification at Ruston, Laird was the 1991 Superdome Classic MVP for the Bearcats’ unbeaten team that finished ranked No. 1 nationally by USA Today. While Ruston won a pair of state titles, Laird set school career passing records and was 30-1 as the starter. He was inducted in the Louisiana High School Sports Hall of Fame in 2010.

Laird spent his early years in Natchitoches when his late father, Billy Laird, was offensive coordinator for the record-shattering, NFL talent-laden Demons of the late 1970s and early 1980s under head coach A.L. Williams, when future pro stars like Bobby Hebert, Joe Delaney and Mark Duper shined for NSU.

His coaching acumen blends with his experience recruiting Louisiana and East Texas, and his knowledge of state high school football enhanced during his time as Ruston’s head coach, to further strengthen his portfolio.

After his record-setting playing career at NSU, Laird coached on Goodwin’s staff in 1996, then worked for Louisiana Sports Hall of Fame coach Don Shows at West Monroe High School in 1997, going on to coach at Ouachita High, Longview (Texas) High and Nashville (Ark.) High before joining Stoker’s staff as defensive coordinator prior to spring practice in 2003.

“At a moment like this, you want to thank so many people, and a few especially stand out. First I’ve got to thank Coach Thomas, who I have such great respect for, and who brought me back here to run the defense this season,” said Laird. “This program is nowhere near broken. We’re closer than the win-loss record reflects because there’s a great foundation, in every aspect, that he has instilled. He has already been a tremendous advisor for me, which is a tremendous asset.

“Coach Sam Goodwin took a chance on me as an undersized quarterback out of Ruston High School, and had a great influence on my life. Coach Scott Stoker brought me back to NSU in 2003, and took a chance on me in the coaching profession. Bradley Dale Peveto gave me my first college job as a graduate assistant here in 1996, and kept me here when he came back as head coach.

“Then I go back to my high school coach, Chick Childress at Ruston, who was so influential to so many young men, and so successful; and of course, to my dad. The reason I got in this profession was watching how he handled young men.

“It’s football, and it’s the X’s and O’s, but for him it was about how he influenced them on and off the field. That’s what I wanted to be a part of, and that’s the approach we’re going to continue here.”
“I look forward to the opportunity to coach this football team. We’re going to have a good team next season and in the years to come.

“My vision is to excel on and off the field. First of all comes the academic piece, and the community involvement this team will have. Then we will excel on the field, between the white lines. It’s going to be created by attitude and effort in everything we do. We’re going to win, and win the right way, in every aspect.”

Laird said he’s already under way on two fronts: building his coaching staff, and honing in on recruiting.

“Recruiting is the focal point of the future of Northwestern State football,” he said. “This is a very vital time with the midyear signing date Dec. 20, and the traditional signing date on the first Wednesday in February. We will get out into the high schools and look forward to visiting with the head coaches throughout Louisiana, and also in Texas, Arkansas and Mississippi.
“We will ensure we’re in every high school in this state,” said Laird. “There’s nothing better than Louisiana high school football. Our program is going to be based on recruiting outstanding high school student-athletes.”

Laird has coached at the high school level as an assistant at some of the region’s most powerful programs: West Monroe, Ouachita, Longview (Texas) and Nashville (Arkansas), in addition to his four seasons as head coach at Ruston. He spent one season, 2007, at SFA.