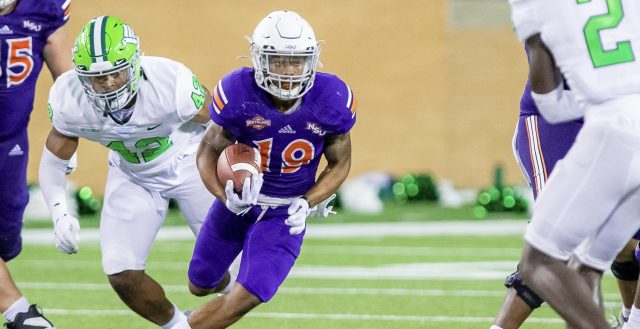 While Adams began the 2021 fall season with another strong effort at North Texas — rushing for 88 yards and a touchdown while catching six passes – the rest of the Demon backs flashed their skills as well, demonstrating the depth of talent within that position group.

“I really like that room,” fourth-year head coach Brad Laird said. “It starts with Scooter. He’s the bell cow of that room, but you saw some other guys step up who were able to run the football.”

The Demons tallied 214 rushing yards against North Texas, the most they have posted against an FBS team since posting 234 at UL Lafayette in 2015. They did so after a six-game spring season in which just three running backs drew carries.

In Saturday’s opener at North Texas, five different backs recorded a carry while five different rushers recorded at least one double-digit gain, topped by Adams’ 36-yard touchdown run in the second quarter. As a team, the Demons averaged 4.5 yards per carry.

Northwestern State did so without Aubrey Scott, their second-leading rusher in the spring, who missed the game with an injury. The run game was successful behind an offensive line that saw two players make their first career starts – tackle Alyzcha Ulufale-Hentz and guard Jordan Cooper.

“I always give credit to the O-line,” said sophomore Curtis Williams, who recorded career highs in carries (8) and yards (39). “They did a good job of maximizing every opportunity presented. Once we get Khalil (Corbett-Canada) back and get the O-line fully healthy, we’ll take off and have even more productive games. We’re headed in the right direction.”

Williams was one of the five Demon rushers to deliver an “explosive” play Saturday. Offensive coordinator Brad Smiley’s definition of an explosive play is a rush of at least 12 yards and a pass play covering at least 18 yards.

Freshman Bryce Dealey had the Demons’ second-longest run from scrimmage Saturday, covering 22 yards in his Northwestern State debut. Quarterback Zachary Clement had a 14-yard rush while Williams and Trevor Morgan each logged career-long runs of 12 yards. Morgan’s came on the final play of the game, leaving him inches short of his first career touchdown.

“Curtis waited his turn and, when the opportunity has presented itself, he always shows up,” Laird said. “We had Kevin Perkins get his first carries for Northwestern State. Then you had Trevor Morgan do what he did at the end of the game. They did that minus one guy.”

In addition to the offensive line, Williams credited his position coach for the depth of production.

Ahead of the 2021 fall season, Laird often referred to Adams and Scott as a “Lightning” pair with the addition of the 6-foot, 234-pound Perkins as putting the thunder in “Thunder and Lightning.”

The head Demon may have to go a little deeper into meteorological terms if more of his running backs have games like Saturday, especially if the mindset they deployed against North Texas takes hold.

“We had the right mentality to score and to treat (North Texas) as equals and not as an FBS team,” Williams said. “I feel like we can run the conference. This first game was a great test. It showed us what we can do and what we’re capable of doing.”