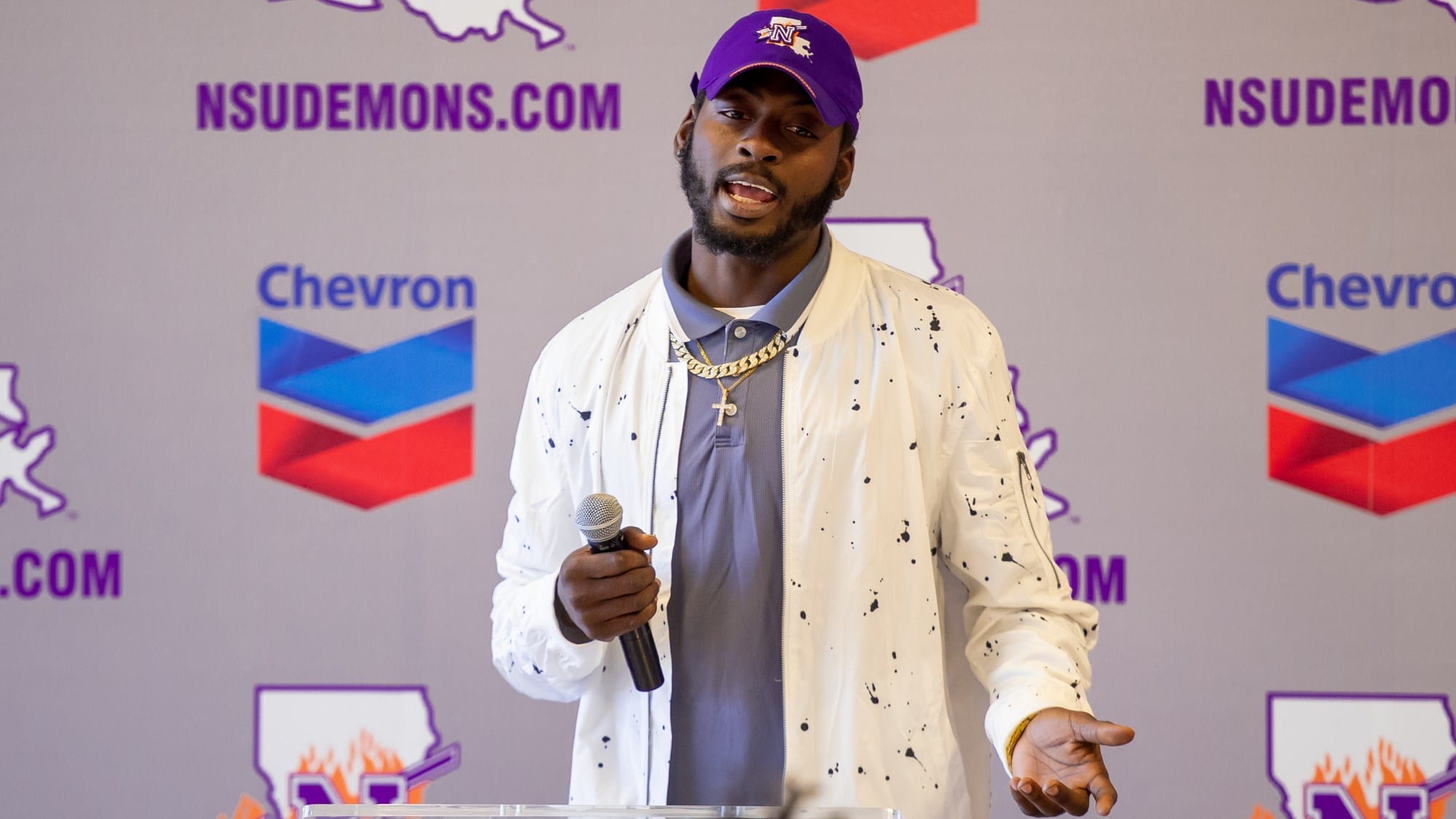 NATCHITOCHES – Record-shattering former five-star LSU signee Jazz Ferguson, who emerged as one of the most productive receivers in the Football Championship Subdivision this fall, announced Tuesday he is forgoing his senior season at Northwestern State and declaring for the 2019 NFL Draft.

The 6-5, 220-pounder was named Southland Conference Offensive Player of the Year last month and is an All-America candidate.

With six 100-yard receiving totals, Ferguson set another Demon season standard, along with his per game average shattering the former mark of 75.7 by All-American Ed Eagan in 2014. Ferguson also tied the school single-game record with three touchdown catches at Abilene Christian. He finished sixth all-time in single-season scoring with 82 points, 14 shy of Tony Taylor’s Demon best 96 in 1999. Ferguson’s scoring total is the only one by a receiver in NSU’s single-season top 10.

His older brother Jaylon recently completed his senior season at nearby Louisiana Tech and is considered a strong draft prospect as a defensive end.

Ferguson thanked coaches and teammates at NSU and LSU in his statement during an afternoon press conference and on social media, but said he felt “the time is right” to pursue a pro career.

Ferguson said he talked with his brother, his mother, and other family members along with advisors when he began to consider the possibility after the Demons wrapped up the season by winning three of their last four games, capped by a 35-23 victory at Stephen F. Austin on Nov. 15.

A week earlier, Ferguson caught the tying two-point conversion pass with 27 seconds left in regulation, then the game-winning touchdown throw in the second overtime in NSU’s home finale, a 37-34 upset of arch-rival and 18th-ranked McNeese.

After two weeks of mulling the decision, he made the choice Sunday to give up his senior season next fall, which would have carried him back to Tiger Stadium for a Sept. 14 contest between Northwestern State and LSU.

“I went back and forth every day, trying to make the right decision. I went with my gut. My family, my brother, my teammates, the coaching staff, they’re all behind me and it felt way better to go ahead and make the call now than to continue to struggle with it,” he said.

He had a 70-yard catch and run score at FCS playoff entry Lamar, leaping to snare the pass with one hand on the NSU sideline shy of midfield, keeping his balance as he twisted to stay in bounds, and then outrunning a defender to break a 35-all tie in the fourth quarter of a 49-48 Demons’ win. That play was No. 2 on that evening’s ESPN SportsCenter Top 10 Plays compilation.

“Obviously, everyone will remember the Lamar catch, but it doesn’t get any better than the game-winner against McNeese,” said Ferguson.

“I came here and changed my life for the better. One of our trainers, Miss Ashley (Leggett), told me when I got here I had a dark cloud over my head, but I’ve come a long way since then. I’m a really good football player, but the biggest improvement is that I think I see the bigger picture. I’m emotional about football, I care about my teammates, I look for the best in everybody else and I try to set the right tone for the team.”

Laird said it was a “bittersweet” decision from his perspective, noting how proud he was of Ferguson’s persistence in re-establishing academic eligibility in 2017 after transferring to Northwestern and of how he became a leader on the 2018 team, but expressing regret that Ferguson won’t be a cornerstone of the 2019 Demons’ squad.

“It’s definitely bittersweet, and if I said anything otherwise, I wouldn’t be telling the truth,” said Laird. “I’m excited for him and his family. His brother is going through the same draft process and he’s had a lot of input from back home.

“Yes, we are going to miss his 66 catches and having the Offensive Player of the Year in the Southland Conference, but as a first-year head coach, I’m going to miss a lot of things I witnessed on the sideline in practice and games that don’t show up in stats, first and foremost, how competitive he is. He’s a great player, but he wants to win in everything he does. When your best player is competing like that, it makes others better.

“I’m going to remember the young man on the sideline with us down a couple of scores, cheering on the defense and encouraging everybody,” said Laird. “Everybody remembers the game-winning touchdown, the one-handed SportsCenter Top 10 catch, those kinds of plays, but I’m going to also remember Jazz as a leader and as a competitor.”