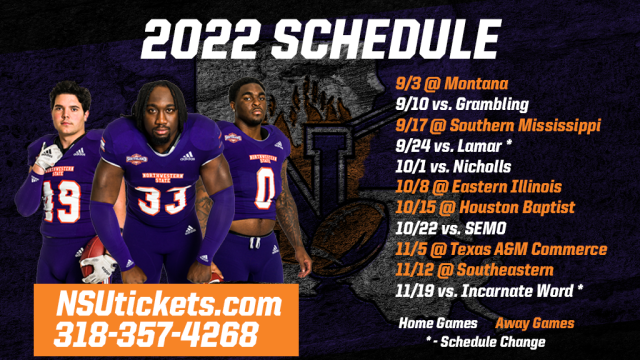 NATCHITOCHES – With the recent changes to the Southland Conference membership, adjustments have made their way to Northwestern State’s 2022 football schedule.

The biggest differences in the new schedule involve a pair of home dates for the Demons, bookending NSU’s conference schedule.

Northwestern State will welcome Lamar University back into the Southland Conference, hosting the Cardinals in the Sept. 24 league opener. Earlier this week, Lamar announced it would return to the Southland a year earlier than expected after its one-season move to the Western Athletic Conference.

The opponent for NSU’s Nov. 19 regular-season finale also was changed.

Instead of facing state rival McNeese to close out the 2022 season, the Demons will host Incarnate Word, which announced in late June it would remain in the Southland Conference and not make an expected move to the WAC.