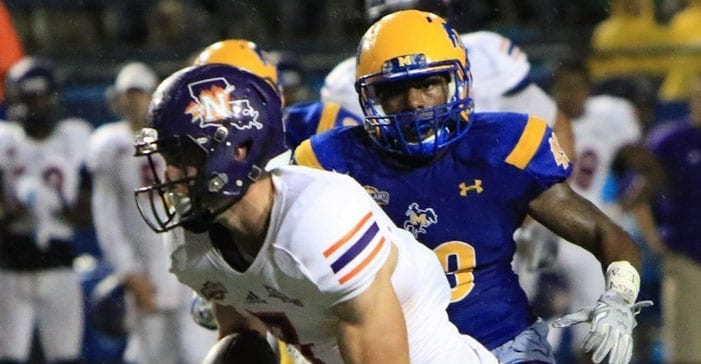 LAKE CHARLES — Despite the 47-27 final score, Saturday night’s renewal of the McNeese State-Northwestern State football rivalry was anything but a 20-point walkover by the unbeaten, highly ranked Cowboys.

“A typical Northwestern-McNeese game, like we figured it would be,” said Cowboys’ coach Matt Viator.

The Demons moved the ball, and scored, against one of the top-ranked FCS defenses. McNeese was No. 1 in the nation in scoring defense (allowing only 7.8 points per game) and third in total defense (255.3 yards per game) but NSU put up 400 yards – not counting the game-opening 97-yard kickoff return by All-American Ed Eagan, and a 92-yard Eagan scoring run on a short pass that was erased by an alignment penalty.

McNeese got 357 total yards from senior quarterback Daniel Sams, who ran for two touchdowns (1 and 52 yards) and threw for three (29, 73 and 2 yards) while posting 115 yards rushing on 17 carries and going 17-of-30 passing for 242 yards. But the Cowboys’ rain-soaked homecoming was almost an epic upset.

“We were right there, toe to toe, into the fourth quarter with a very, very good McNeese team, with one of the best defenses I’ve seen here,” said Demons’ coach Jay Thomas. “If we get one break the other way on about 3-4 plays, I think we’re celebrating right now. I’m really proud of our guys for the way they competed and the way they played tonight in all three phases. I’m hurting for them too.”

NSU tied the game on the first play of the final quarter when quarterback Stephen Rivers (276 yards passing on 21-of-37 aim) found Tuff McClain on a post pattern for a 42-yard touchdown. McNeese regained the lead four plays later on Sams’ 52-yard scramble with 12:42 left.

After NSU pushed 43 yards downfield to its 48 and stalled after eight plays, Thomas rolled the dice on a game-changing fake punt, but an option keeper on fourth-and-six was stacked up for only a yard’s gain.

“We’re down seven middle of the fourth quarter and our defense was wearing down. I thought we had to take the shot,” said Thomas, whose team has pulled off several fake punts this season. “If we’d pitched it, we had a big play, the ball’s deep in their territory at least, if we don’t score on it. Didn’t work out. Give McNeese credit for putting it away with the two late touchdowns.”

The Cowboys’ Jermaine Antoine picked off Rivers on the Demons’ next play and ran it back 28 yards to the NSU 15. Ryan Ross dove across from the 1 with 2:19 remaining to salt away the outcome.

A hotly contested pass interference flag in the third quarter hurt NSU’s upset bid. On third-and-15 at its 30, nursing a 21-20 lead, Sams went deep over the middle. The incomplete throw was negated by the penalty, and instead of fielding a punt, five plays later, the Demons were down 27-20.

“The pass interference call we didn’t agree with, and it was critical. We had them stopped and that penalty gave them new life. I’d have liked to have seen how it would have unfolded if we’d gotten that break,” said Thomas.

Another flag, not disputed by NSU, erased a second length-of-the-field score by Eagan. Early in the third quarter, after a furious counter-punch of touchdowns on the first two plays from scrimmage left McNeese ahead 21-17, Eagan snagged a short pass from Rivers and faked out three Cowboys, then outran several more down the Demon sideline on an apparent 92-yard go-ahead score.

Said Thomas: “Ed made a sensational run off the short pass and went the length of the field, but we had a bad alignment and didn’t have seven guys on the line of scrimmage. Tough call, a penalty that had nothing to do with the outcome of the play, but the correct call, and unfortunately it wiped out a great, game-changing play.”

The game started in stunning fashion when Eagan knifed across the field and raced 97 yards with the opening kickoff, the third-longest runback in school history. He had 241 all-purpose yards as he shattered the Demons’ 10-year-old career all-purpose mark (5,025 by Toby Zeigler, 2002-05).

Another dynamic Demon effort on a kickoff, said Thomas, typified the valiant performance by his team.

Coming out of a 14-10 halftime score, McNeese padded the lead on the first play of the third period with Sams’ 73-yard bomb to Kent Shelby. NSU struck back immediately on its first snap as quarterback Joel
Blumenthal raced 62 yards to make it 21-17. On the ensuing kickoff, McNeese’s Jamari Payne broke loose in front of the Cowboys’ bench and seemed headed for a 95-yard score, but Demons’ senior safety Chase Collins ran him down from behind inside the 15 and stripped the ball loose, recovering it at the NSU 8.

“That play by Chase really says it all about the effort our guys gave,” said Thomas. “He refused to give up and made an incredible play with incredible effort. We had that from our team all night long but that one obviously stands out.

“We’ve got to understand how close we were, and sustain the effort and improve the outcome next week,” he said. “This shows we can win every week. I just want us to get the next one next Saturday at Nicholls.”

NSU goes to Nicholls for a 3 p.m. game next weekend, then hosts Abilene Christian Nov. 7 at 6 p.m.